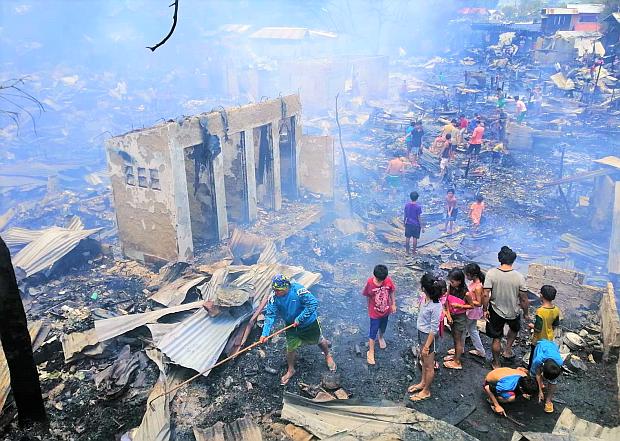 SFO3 Samson Velarde said the fire started at the house of couple Apolinario and Leoncia Diaz around 8:50 a.m.

According to Velarde, Leoncia, 68, was cooking rice while also doing another chore. When she went back, the kitchen had already caught fire.

She called on Apolinario, 74, to help her put out the fire, but it had already spread fast to the rest of their shanty. Both suffered burns in trying to put out the fire.

From the Diaz couple’s so-called St. John neighborhood in Barangay Puntod, the fire gutted other nearby shanties in Barangay Lapasan before it was completely put off at 11:14 a.m.

The City Social Welfare and Development Office counted close to a hundred families who were rendered homeless.

Apart from the Diaz couple, also injured from the fire were Sherwin Tahuyan, 39, and Richard Capahigal, 26. They were treated for minor burns at a nearby hospital.

Throughout the two-hour blaze, according to Velarde, they also worked to prevent the flames from engulfing a nearby fuel depot.

When the flames were gone and the blames arose, BFP officials advised the homeless families to reconsider filing legal action against the Diaz couple in consideration of their age.

Velarde said the incident was due to negligence and not sabotage.