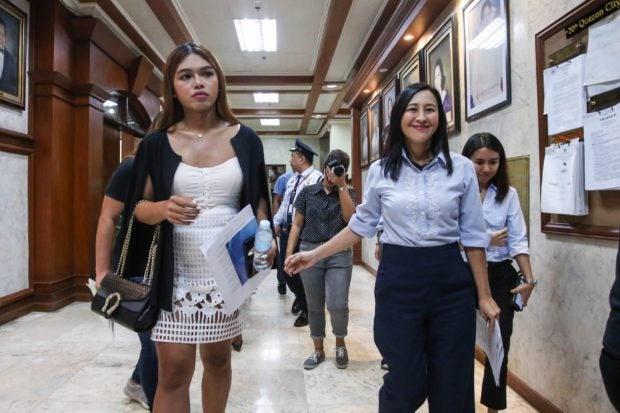 ON THE ROAD TO EQUALITY After discussing Tuesday’s discriminatory incident at a mall in an executive session, transgender woman Gretchen Diez and Quezon City Mayor Joy Belmonte meet the media at Quezon City Hall to expound on the city’s gender-friendly initiatives. —JAM STA. ROSA

Gretchen Diez has lost count of the times she had been kicked out of female restrooms because of her sexual orientation.

But her latest experience at a shopping mall on Tuesday prompted the transgender woman to stand her ground and decide that “this has to stop. This has to be documented.”

Diez lodged a complaint on Friday against Araneta Center Inc. and Starline Security Agency before the Quezon City Pride Council (QCPC), a body created in 2013, for violation of the Gender Fair Equality ordinance.

Her lawyers were still weighing their options, but Diez said that it was not the only complaint she would file. Among the violations she cited was the lack of proper orientation of the mall’s staff against gender discrimination.

“I’ve decided that we will push through with the fight [against] this establishment,” Diez said at a press conference at Quezon City Hall.

Cochaired by Mayor Joy Belmonte and Vice Mayor Gian Sotto, the QCPC is a local government initiative for formulating and integrating programs for members of the LGBTQ+ community. It has an oversight function over the implementation of the city’s antidiscrimination ordinance.

The council was created during the term of then Mayor Herbert Bautista and was formally launched on March 25, 2013. It was once headed by the late theater director Soxie Topacio.

The first of its kind in the country, the council envisions Quezon City as the most open and welcoming community for LGBTQs, protecting their rights and supporting various Pride events and campaigns, including HIV/AIDS prevention.

Belmonte has reassured Diez of the city’s support, saying that the transgender woman was “not alone and she has a very strong ordinance to back her up … in whatever [step] she decides to take.”

On Aug. 13, Diez was accosted by a female cleaner at the female restroom of Farmers Plaza in Cubao and was asked to use the male restroom instead. An altercation ensued when Diez started video-recording the cleaner’s actions, prompting the latter to take her to the mall’s security office where she was detained.

Diez posted her ordeal on Facebook and sought the help of the Quezon City Police District’s Station 7. The responding officers, however, handcuffed and arrested her.

The mall’s management later issued a statement apologizing to Diez, the LGBTQ+ community and the general public, saying it was looking into the “unfortunate incident.”

“Management makes no distinction between customers here, and the LGBTQ+ community has always been welcome,” said Farmers Plaza property manager Morriel Abogado. “We hope this isolated incident, clearly a mistake committed by an agency worker not organic to our company, does not define our lasting good relations with all our customers.” 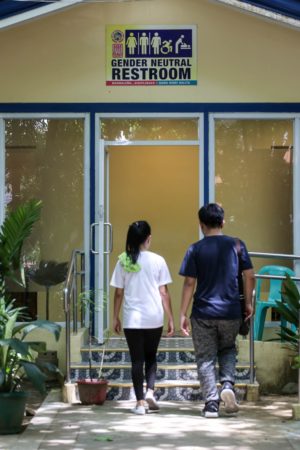 READY FOR THIS? Following the arrest this week of a transgender woman for using a female restroom in a shopping mall, this gender-neutral restroom at Mandaluyong City Hall might soon become the norm in public places. —JAM STA. ROSA

Speaking to reporters on Friday, Diez said: “When I was transitioning into a woman I had so much fear in me. It took me years before I attempted to enter a female washroom. During those times I got kicked out [of the washroom].”

“That instance (on Aug. 13) I was planning to remain quiet, but I don’t know what got into me. I said this has to be stopped. This has to be documented.”

She said it was disappointing that she had such an experience in Quezon City, the first local government unit in the country to implement a sexual orientation and gender identity and expression (Sogie) ordinance. She was referring to the measure passed in 2014 and authored by Councilor Lena Marie Juico.

The ordinance prohibits discrimination in the workplace and educational institutions against LGBTQ+ members, whether through verbal and nonverbal ridicule, harassment, barred entry, denied promotion, and the refusal to deliver goods and services.

Senate President Vicente Sotto III proposed the setup of a restroom for members of the LGBTQ+ community, but acknowledged that the idea may be difficult to execute.

“Restrooms are biology-based. Lesbians cannot stand in a male-only urinal. Let’s have some reality check,” Sotto said in a message to reporters.

He said the “sensitivities” of women who are uncomfortable with transgenders using female restrooms should also be taken into account. —WITH A REPORT FROM LEILA B. SALAVERRIA