Seized by the government five years ago, luxury vehicles from Japan and Korea are exposed to sun and rain
By: Melvin Gascon, Yolanda Sotelo - @inquirerdotnet
Philippine Daily Inquirer / 05:04 AM August 17, 2019

RUSTING AWAY In this file photo, used Hyundai Starex vans from South Korea slowly deteriorate as they are exposed to the elements at the car lot of the Cagayan Special Economic Zone and Freeport at Barangay Casambalangan in Santa Ana, Cagayan. —MELVIN GASCON

SANTA ANA, CAGAYAN—They may have lost millions in investments in a used car importation business, but importers have learned to move on from the “mistake” of bringing in close to 800 secondhand vehicles despite a government ban.

These importers of used cars, a once brisk trade at the Cagayan Special Economic Zone and Freeport here, said they just have to learn to accept their fate even as the government has yet to give the issue some “closure.”

“There is nothing we can do now. Since [the issue] is now in the hands of government agencies, it should not be too difficult for them to dispose of those vehicles instead of leaving them there sitting and dilapidated,” said Peter Geroue, president and chief executive officer of New Apollo International Cagayan Trading Inc., one the biggest dealers of Japan-sourced vehicles at the free port.

The Cagayan Economic Zone Authority (Ceza), which operates the free port, has announced plans of donating the more than 800 rusting vehicles to the uniformed personnel as well as to other “interested” agencies and local governments.

New Apollo owns about 600 of the vehicles, which had been forfeited in favor of the government after these were declared as illegally imported—an allegation which car traders like Geroue disputed.

Ceza appears to have softened in its stand over the disposal of the vehicles, after announcing in 2016 that it would destroy the more than 1,300 used cars that were included in the last four shipments to have arrived at Port Irene here from December 2012 to February 2013.

Officials then said crushing the remaining cars, on orders of President Duterte, was to supposedly send a “strong message” of the government’s “no nonsense” fight against smuggling.

A shipping manifest of the last shipment in 2013 showed the inventory included 53 Mercedes-Benz sports cars, 30 Hummers, 21 BMWs of various models, seven Porsches consisting of 911, Boxster and Carrera units, a Ferrari F355 Berlinetta and a Lamborghini Murcielago.

The bulk of the cars consisted of various models of Honda and Toyota compact cars and sedans as well as Hyundai Starex vans. Of these, only 14 units were, however, destroyed in 2018, witnessed by Mr. Duterte.

“I assured the President that all 855 vehicles would be condemned, but we had 14 only for the first batch. The President said, ‘OK, then take care of the rest,’” Ceza administrator, Raul Lambino, said in an earlier interview.

“Many of these can be vehicles used as emergency or patrol vehicles, while the 4×4 units may be donated in hard-to-reach areas,” Cruz said.

The Philippine National Police and the Armed Forces of the Philippines are the priority beneficiaries.

The Ceza has awarded around 500 of the vehicles which have been “marked” by the PNP, the AFP and other agencies. Until now, however, the agencies have yet to claim their selected vehicles. 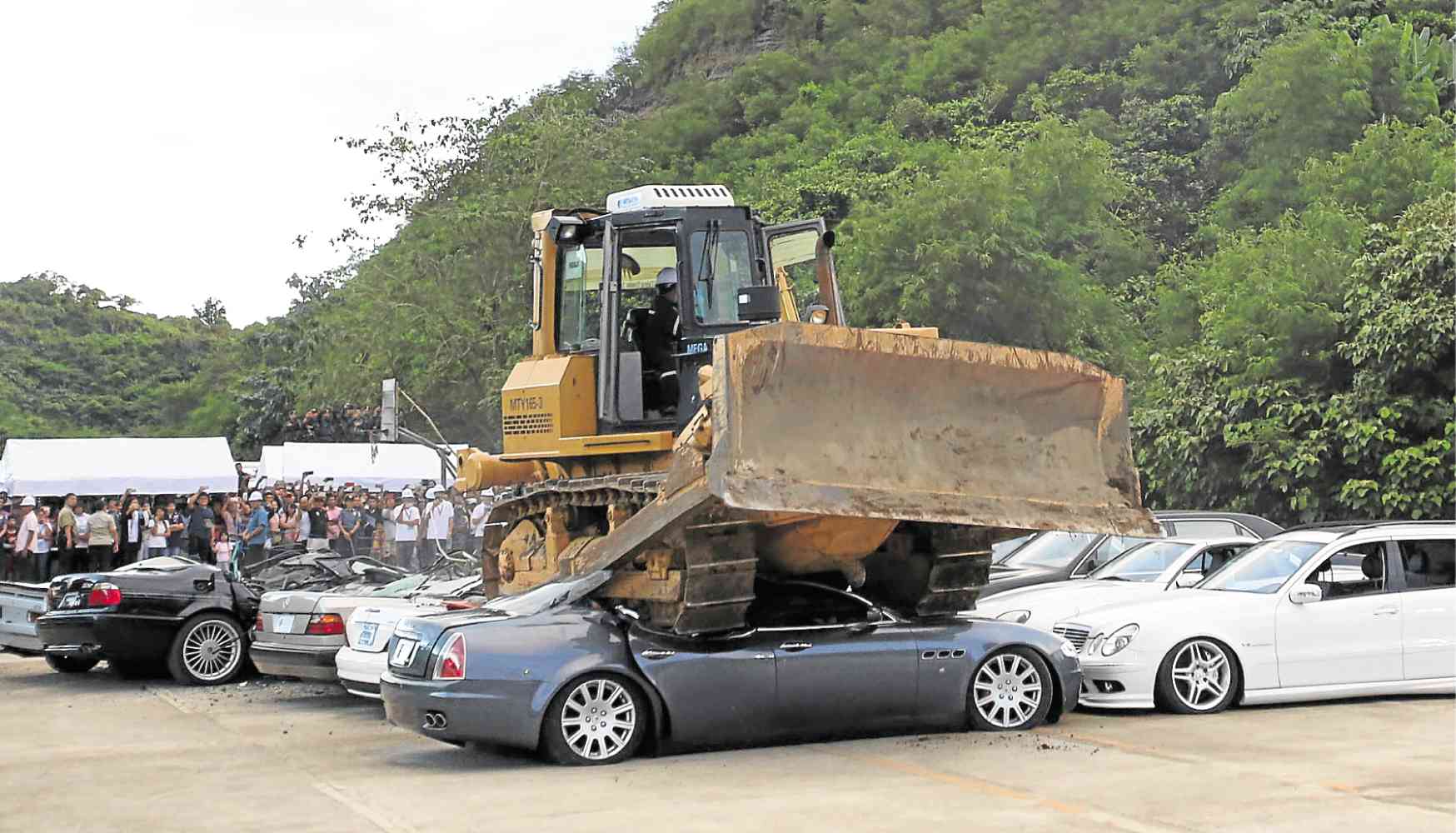 CONDEMNED Luxury vehicles are destroyed using a backhoe. President Duterte and some of his Cabinet members witnessed the disposal of these cars in 2018. —JOAN BONDOC

Cruz said his office had received numerous requests from police and military units, local governments and nongovernmental organizations from northern Luzon and even Mindanao.

“We just cannot as yet act on the requests as we are still awaiting clearance from the [Bureau of Customs, or BOC],” he said, adding that the BOC gave no reason for the delay and no timetable within which it was expected to complete the seizure proceedings.

The vehicles will be donated on an “as-is-where-is” basis, Cruz said, and getting these from their depot in Barangay Casambalangan here would be done by the recipient agencies.

Left untouched in the open yard for five years now, the cars are exposed to sun and rain and are already deteriorating. Some have broken windows and their steel parts, rusty.

“We cannot move them until they are released to the recipients who are the only ones who can get them,” Ralph Patrick Iloy, a port operations specialist, told reporters who visited the free port last month.

Car traders expressed dismay that the government had chosen to give away the seized vehicles five years since these were abandoned and left sitting at the seaside yard.

“I doubt if any of those vehicles can still be serviceable. These have been sitting there for the last five years, being eaten by rust and exposed to the elements day and night,” a source, who spoke on condition of anonymity, said.

The source, who has been involved in the car trading business at the Cagayan free port for years, warned that BOC and Ceza officials would also expose themselves from possible suits from importers who lost millions from the seizure of the vehicles.

According to him, the importation has been covered by import permits from the Ceza, and the vehicles have not been taken out of the free port yet.

Technically, these may be considered to have not yet arrived in the country, the source said, adding that: “Let us wait until the Duterte administration is out of power. By then, these officials shall have their time of reckoning.”