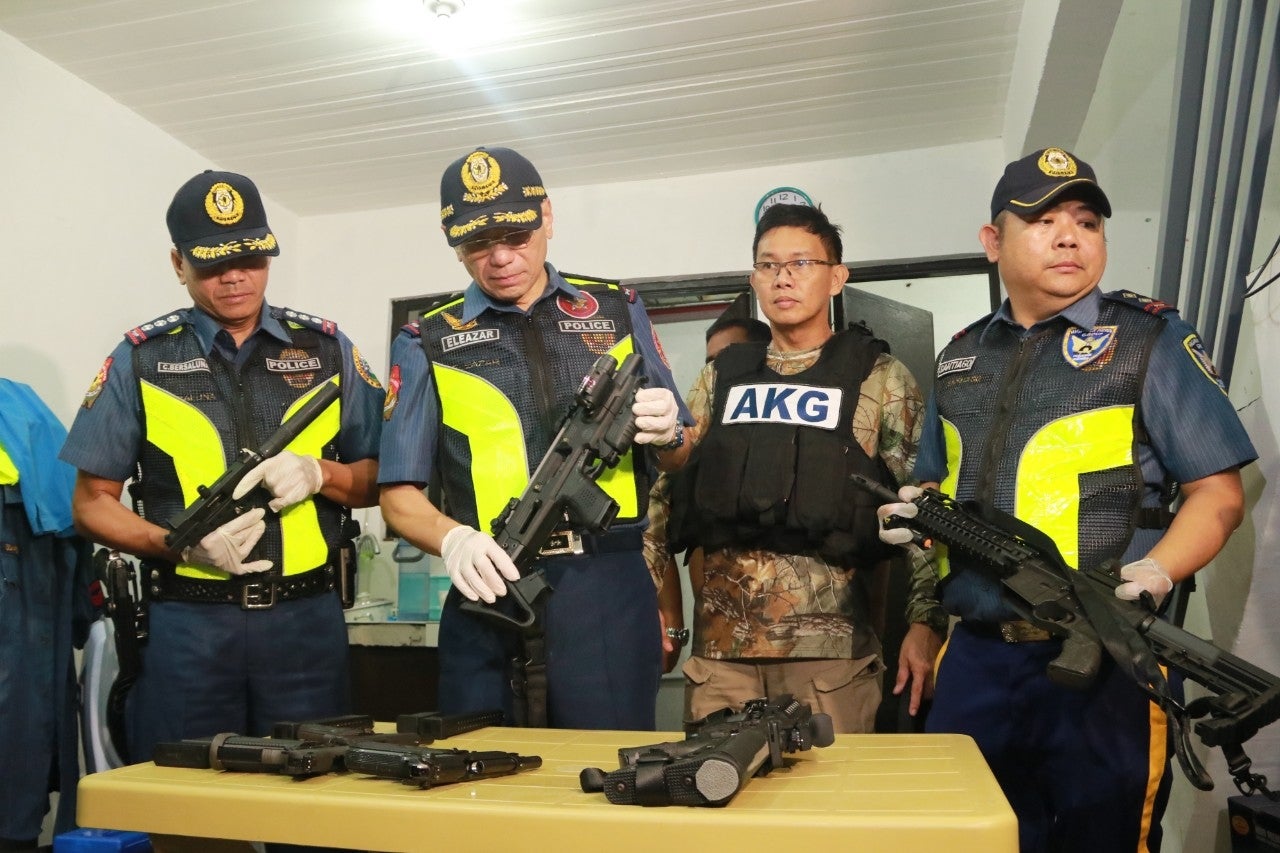 TOOLS OF THE KIDNAP TRADE National Capital Region police chief, Police Maj. Gen. Guillermo Eleazar (second from left), inspects some of the guns and police uniforms used by a kidnap gang preying on Bureau of Internal Revenue (BIR) officials who cough up millions of pesos in ransom payments but decline to cooperate in the police investigation. It is believed that the alleged victims could not explain where they got such large sums to pay the kidnappers. —PHOTO COURTESY OF NCRPO

An alleged member of a kidnap gang that preys on Bureau of Internal Revenue (BIR) officials was killed in a shootout with police in Marilao town, Bulacan province, on Thursday.

Leo dela Fuente, 41, died in the clash with police officers who were serving a court warrant to search for high-powered firearms and explosives at his house on Aster Street at Residencia Regina Subdivision in Marilao’s Barangay Loma de Gato.

Police described Dela Fuente as a “major player” in the kidnap gang.

Police Maj. Gen. Guillermo Eleazar, chief of the National Capital Region Police Office (NCRPO), said the kidnappers had been targeting BIR officials, usually revenue district officers, and usually demanded millions of pesos in ransom from the victims or their families.

“What sets these abductions apart from the usual kidnap for ransom instances … is their transactions were so swift. In fact, the length of time of the kidnapping, from the negotiations to the release of the victim, won’t last even for a day,” Eleazar said.

According to an Inquirer Biz Buzz report, a ransom that was paid recently amounted to P60 million.

Manalastas, Garcia and Antonio were not at their houses at the time, but several people were taken into custody—Garcia’s wife, Rosalinda, and two of their children, and Julieto Tering, father of Antonio’s common law wife.

The raiders recovered six grenades, 13 firearms, including M16 rifles and an Uzi submachine gun, three cars and a motorcycle. 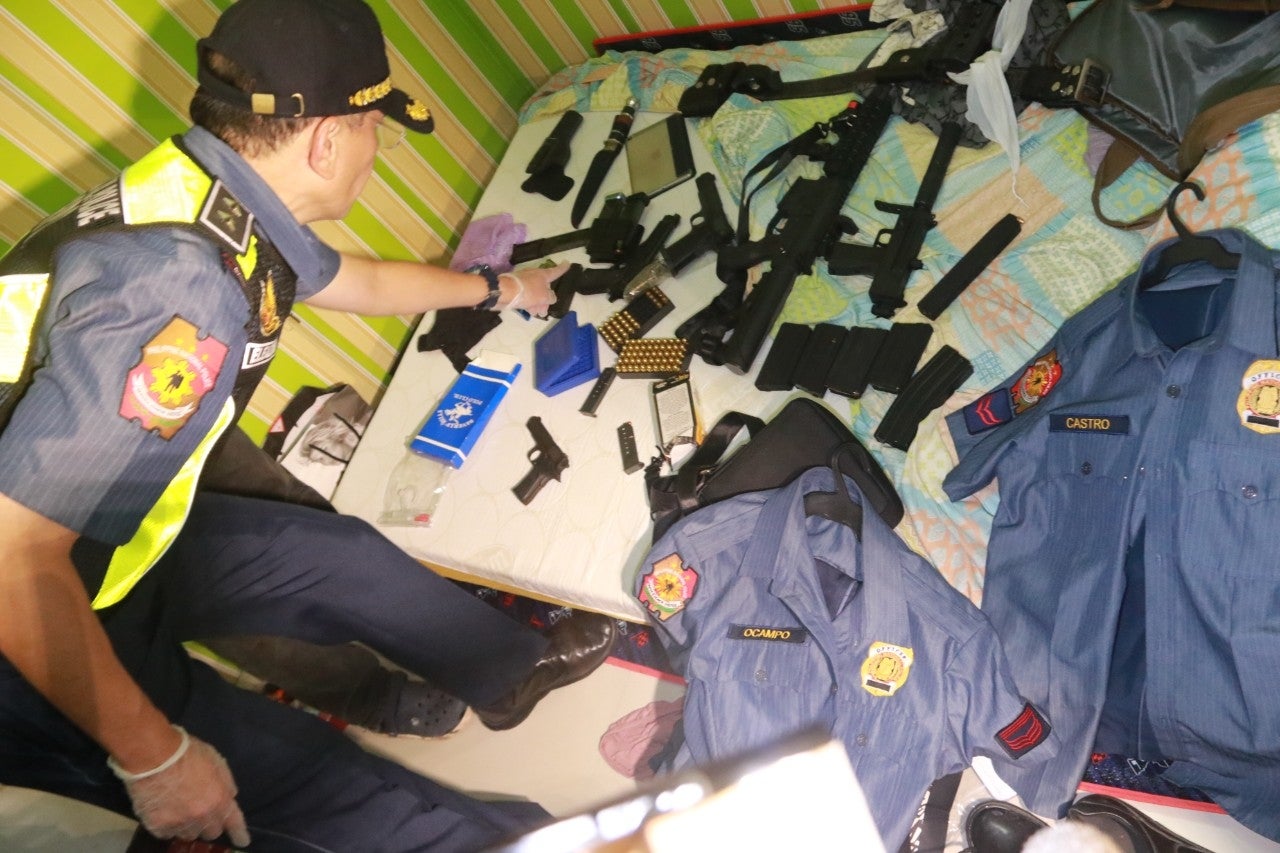 They also found police uniforms, one with a nameplate and the badge of a police chief master sergeant, which confirmed information that the gang included policemen, Eleazar said.

“We learned that their members included PNP personnel, usually deemed absent without leave, or possibly even those still active in the service. There are also former military personnel, and even employees of the BIR themselves,” Eleazar said.

The NCRPO chief said the gang members, wearing police or military uniform, accost their victims traveling in their vehicles or just barge into their homes.

He said the police were tipped off about the gang’s activities in August last year. These were confirmed by BIR officials but none of the alleged victims had cooperated in the police investigation, Eleazar added.

The Inquirer has learned from Finance Secretary Carlos Dominguez III that the victims were unwilling to file  complaints partly because it would be difficult for them to explain how they were able to raise such large sums for ransom payments, given their relatively small salaries.

Dominguez said President Duterte had been informed about the kidnappings. He noted that the spate of abductions had already affected work at BIR offices because some officials had not been showing up at their posts for fear of being kidnapped.

Eleazar said investigators would analyze the “voluminous documents” they had confiscated from the houses of the suspects to identify gang members and victims.

One document was the registration for a sport utility vehicle (SUV) traced to a BIR revenue district officer in Pangasinan, who was reportedly a victim of the kidnap gang.

The SUV was used by gunmen as getaway vehicle in a failed attempt to kill a mayoral candidate and his staff in Solana town, Cagayan province, on Aug. 13 last year. It was later found in nearby Enrile town.

Eleazar said police were looking into whether the kidnappers also worked as guns-for-hire.

“With this development, I encourage victims and their relatives to come forward to report and help us prosecute these criminals,” he said.