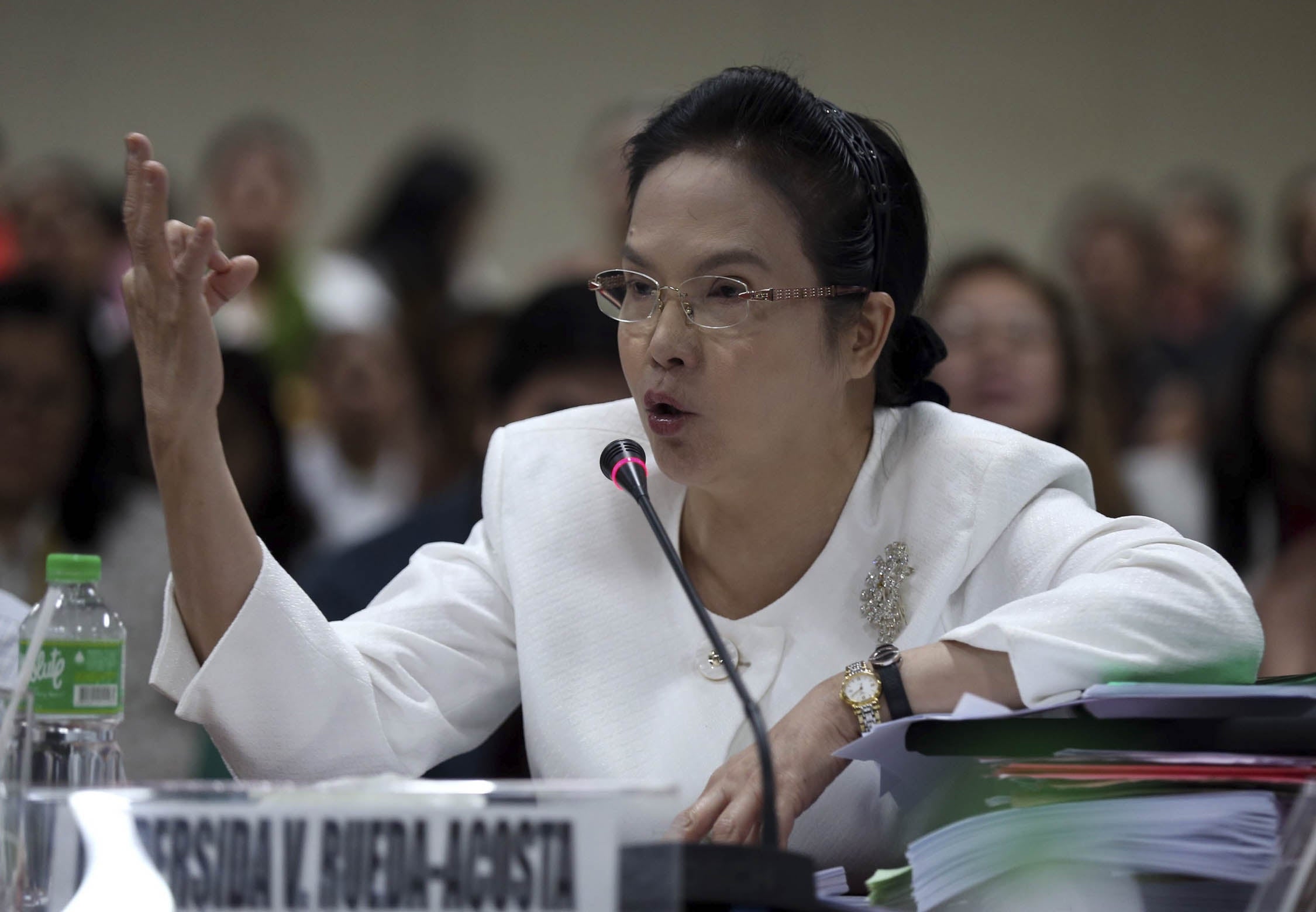 A lawyer who has accused Public Attorney’s Office (PAO) Chief Persida Acosta of graft says President Duterte should fire her if the Ombudsman would not immediately suspend her.

“If the Ombudsman cannot act on my request for preventive suspension, which has been pending for months, the President can fire her,” lawyer Wilfredo Garrido Jr. said in a statement on Thursday, after lawyers from the PAO filed a motion in intervention in the graft case he brought against the chief public attorney in May.

Garrido accused Acosta and PAO forensic chief Erwin Erfe of establishing a forensic laboratory for the agency without authorization from Congress.

The PAO lawyers, who did not identify themselves in their motion for fear of reprisal, charged that Acosta and her allies in the agency’s financial and management service defrauded the government by doctoring purchase orders to funnel agency funds to Acosta.

Like Garrido, the lawyers asked the Ombudsman to preventively suspend Acosta.

Acosta has denied the allegations, calling the lawyers’ move a “smear campaign” and their motion a “malicious scrap of paper.”

Ombudsman Samuel Martires said on Wednesday that the agency would look into the lawyers’ motion.

“The President still trusts her as long as there is no findings of probable cause so far. But if there is probable cause present, that’s another matter. Then there will be a suspension from the Ombudsman. That’s not the President’s territory,” presidential spokesperson Salvador Panelo said.

Garrido said Acosta should answer the charges instead of disparaging the lawyers’ motion.

“[These] could have been laid bare only by highly placed sources with [the] PAO. These lawyers [have] intimate knowledge of the operations of [the] PAO, to which strangers like me have absolutely no access,” he said.

Acosta, he said, should be removed from office as she “has treated the PAO as her personal fiefdom,” operating without oversight.

“She plays fast and loose with the PAO budget, diverting its funds to finance her public relations campaigns, especially her quixotic crusade against public health officials, with catastrophic effects on public health,” he added.

Garrido was referring to the vaccine scare caused by Acosta’s blaming the deaths of more than a hundred schoolchildren on the dengue vaccine Dengvaxia.

The Department of Health (DOH) blamed the current dengue epidemic in the country on the vaccine scare, which it said brought down the vaccination rate to 40 percent in 2018 from 70 percent in previous years.

The DOH has repeatedly said that none of the deaths had been traced directly to Dengvaxia, which had been given to more than 800,000 schoolchildren before the inoculation program through which it had been administered was aborted in late 2017.

Duque on Thursday expressed support for the PAO lawyers’ action.

“The charges from her own people are very serious,” he said. “If they have evidence, then, by all means, they should pursue it.”

Justice Secretary Menardo Guevarra sought to distance himself from the new charges against Acosta, claiming he had no knowledge of them.

The PAO is an agency overseen by the Department of Justice.

“What I know is that there is already a case filed by a certain Mr. Garrido against the PAO chief and it is pending investigation by the Office of the Ombudsman. So this request by some anonymous PAO lawyers for, I think suspension in the meantime of the PAO chief, we will leave that to the Office of the Ombudsman,” Guevarra told reporters on Thursday.

He said Acosta had denied to him Garrido’s charge that she illegally established the PAO forensic laboratory for Erfe.

“That’s all I can say [because] the matter is under investigation,” Guevarra said, adding that he was unaware of the other allegations of funds misuse against Acosta and Erfe.

“I think she has submitted her counteraffidavit and other controverting evidence so we will leave it to Ombudsman [Samuel] Martires to resolve that as soon as possible,” he said.

Erfe on Thursday declined to comment on the Ombudsman case but in a Facebook post, he called news reports about it “the greatest fiction I’ve read so far.”

“I will pray for them,” he said, referring to the PAO lawyers.

In an online interview with the Inquirer, Erfe said he had conducted autopsies on 144 so-called Dengvaxia victims, most of them schoolchildren, since 2017.

He said the PAO had filed 78 criminal and civil cases, all related to use of Dengvaxia, against public officials, including Garin and Duque. —REPORTS FROM PATRICIA DENISE M. CHIU, DONA Z. PAZZIBUGAN, JULIE M. AURELIO, TINA G. SANTOS AND MARICAR CINCO

Read Next
House approves higher tax on liquor, e-cigarettes
EDITORS' PICK
Irving out of game five clash with Bucks — Nets
US welcomes Duterte’s decision to hold off VFA termination for 3rd time
Ahead of ONE: Full Blast II, Mongkolpetch warns Elias Mahmoudi: ‘Watch out for my fists’
Synology NAS: A photo storage and multimedia server for your home
Alex Eala wins Grand Slam on Independence Day: ‘I hope I made my contribution to the country’
‘Magre-recalibrate tayo:’ Duterte directs more vaccines to areas with high COVID cases
MOST READ
‘Hindi pwedeng take 2,’ Sotto tells presidential, VP aspirants
Tighter curbs sought in provincial COVID-19 hot spots
Not even found in Tiktik: Another bad word snuck into DepEd materials
NCR Plus remains under GCQ from June 16-30
Don't miss out on the latest news and information.