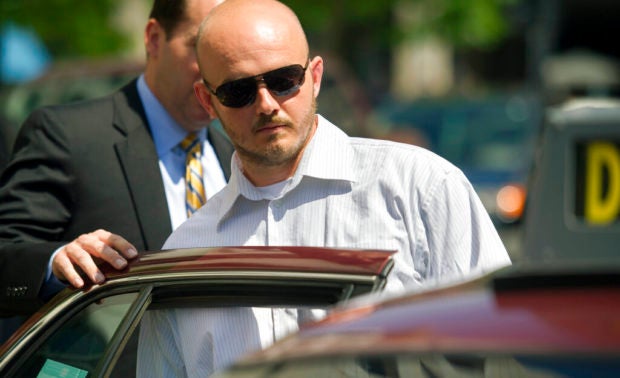 In this June 11, 2014, file photo, former Blackwater Worldwide guard Nicholas Slatten enters a taxi cab as he leaves federal court in Washington, after the start of his trial. A federal judge has sentenced a former Blackwater security contractor to life in prison for his role in the 2007 shooting of unarmed civilians in Iraq. (AP Photo/Cliff Owen, File)

WASHINGTON — A former Blackwater security contractor was sentenced Wednesday to life in prison for his role in the 2007 shooting of unarmed civilians in Iraq that left 14 people dead.

Federal judge Royce Lamberth issued the sentence after a succession of friends and relatives requested leniency for Nicholas Slatten, who was found guilty of first-degree murder by a jury in December.

Prosecutors charged that Slatten, 35, was the first to fire shots in the September 2007 massacre of Iraqi civilians at a crowded traffic circle in Baghdad. In all, 10 men, two women and two boys, ages 9 and 11, were killed.

The defense had argued that Slatten and other Blackwater contractors opened fire only after they saw what they mistakenly thought was a potential suicide car bomber moving quickly toward their convoy.

Defense attorney Dane Butswinkas described Slatten as “a person of high integrity” whose family members had served in the U.S. military for four generations.

Several of Slatten’s supporters openly accused prosecutors of scapegoating an innocent man in order to placate Iraqi public opinion. The shootings strained U.S.-Iraqi relations and focused intense international scrutiny on the extensive use of private military contractors in Iraq.

In 2014, a jury convicted Slatten and three other contractors — Paul Alvin Slough, Evan Shawn Liberty and Dustin Laurent Heard— who were part of a four-vehicle convoy that was protecting State Department personnel in the area. An appeals court overturned that conviction, saying Slatten should have been tried separately from the three other men.

Slatten, of Sparta, Tennessee, was retried last summer, but a mistrial was declared after the jury couldn’t reach a unanimous verdict. A subsequent jury convicted him of murder in December 2018.

Slatten’s father, Darrell, paused in addressing the judge to speak directly to his son, who sat largely impassive in a beige prison jumpsuit.

“Nick, please accept my apology for what your country has done to you,” he said. “We will fight until hell freezes over to correct this travesty of justice.”

Slatten himself told the judge that he was a victim of an “unjust prosecution” and that government lawyers cared more about producing a conviction than uncovering the truth of what happened in Baghdad 12 years ago.

“This is a miscarriage of justice and it will not stand,” he said.

But Judge Lamberth, in issuing the life sentence, dismissed much of the family’s claims that Slatten was a scapegoat for international political considerations.

“The jury got it exactly right,” he said. “This was murder.” /jpv