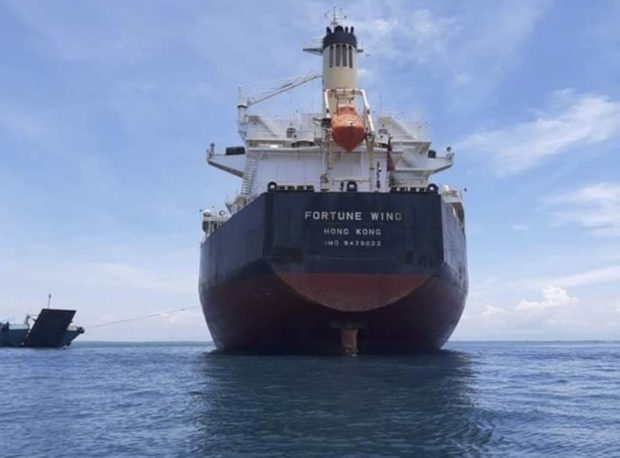 CAGAYAN DREDGING This dredging vessel has been seen at the mouth of the Cagayan River in Cagayan province since July. The provincial board has asked President Duterte to intervene to stop the dredging, which reportedly involves black sand extraction. —PHOTO COURTESY OF GISING CAGAYAN

MANILA, Philippines – The Department of Public Works and Highways (DPWH) should stop the dredging activity in Cagayan due to the absence of a necessary permit.

An ocular inspection was conducted by the Mines and Geosciences Bureau (MGB) as well as representatives from concerned government agencies showed that the dredging company Pacific Offshore Exploration Inc. (POEI) conducted dredging operation without the necessary permit.

A Memorandum for the Regional Director dated June 13, 2019 from the MGB showed that the company has a memorandum of agreement with the Cagayan Provincial Government but has no dredging permit from the DPWH.

The Bureau said the DPWH should issue a cease and desist order against the POEI pending issuance of an approved dredging permit.

The Bureau added that the sample dredged materials should be sent to MGB Central Office for laboratory analysis.

Recently, the Cagayan provincial board already called on President Rodrigo Duterte to intervene on the dredging at the mouth of the Cagayan River that reportedly involves illegal extraction of black sand, or magnetite, an ore of iron used in steel production by POEI.

Last July 20, fisherfolk from several barangays in Aparri, Cagayan already tapped the police, fearing the negative effect of the hauling of silt materials from the Cagayan River.
Based on the memorandum of the Cagayan Police Provincial Office, the hauling of silt materials from Cagayan River stopped during Typhoon “Falcon” and resumed operation soon after the weather disturbance passed.