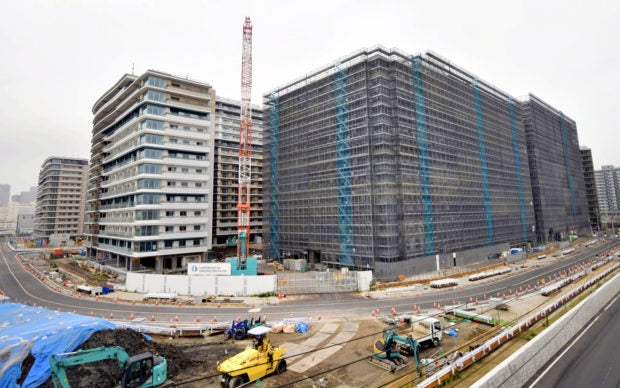 The Harumi district, which is being prepared as the Olympic Village, is seen in Chuo Ward, Tokyo, on July 22. After the Games, it will become Harumi Flag, a residential area for about 12,000 people. The Japan News/Asia News Network

TOKYO — In the Global Power City Index of the world’s major cities, released annually by the Mori Memorial Foundation, Tokyo ranked third in the most recent survey conducted in 2018. It followed London and New York for the third straight year.

The Global Power City Index was launched in 2008, and for years Tokyo seemed to hold a “fixed position” of fourth place. In 2016, Tokyo rose to third, switching places with Paris, which had been hit by terrorist attacks in 2015. But according to a senior official of the Tokyo metropolitan government: “Tokyo is in the midst of fierce intercity competition. It must now take advantage of the Olympics to take first place as its fixed position.”

Tokyo sees London as a particular rival. London has held the top ranking ever since hosting the 2012 Olympics and Paralympics, and the 2020 Games are an ideal opportunity for this to be reversed. The key words to describe the vision of Tokyo’s future after the Games are “renewal” and “innovation.”

Tokyo suffered great damage in the air raids of World War II and the prewar 1923 Great Kanto Earthquake. It consolidated its urban functions through the process of reconstruction.

The culmination of postwar reconstruction was the previous Tokyo Olympics in 1964. The Metropolitan Expressway was developed and the Tokaido Shinkansen line opened. The sewerage system, development of which was long overdue, was extended around Tokyo in one fell swoop, and living conditions were quickly improved.

Half a century has passed since then. Social and living infrastructure has aged, and it is becoming increasingly difficult to make inspections and repairs. Drones have been used experimentally to inspect large structures such as bridges and dams, and elevated sections of roads and railway lines. Repair robots that enter water pipes, navigating via remote control, have also been developed and deployed. The metropolitan government’s Waterworks Bureau is aiming to make the robots self-navigating.

The Linear Chuo Shinkansen line linking Tokyo and Nagoya, whose opening is scheduled for 2027, will dramatically change Tokyo and Japan after the 2020 Games. It will link Tokyo to Nagoya in about 40 minutes, and to Osaka in about one hour after the extension that is planned for 2037.

Traffic in Tokyo is also likely to change significantly after 2020. The metropolitan government envisions that most cars on Tokyo roads in the 2040s will be self-driving vehicles. Traffic congestion will be greatly reduced by coordinating with congestion forecasting systems that use artificial intelligence and big data. Roads where congestion has been alleviated will have fewer car lanes, wider sidewalks and more green space.

Concrete goals have also been set for the environment. While it is ambitious, effectively zero carbon dioxide emissions are the aim for 2050. The incineration of plastic waste from homes and large office buildings will first be reduced by 40 percent by 2030, and charging facilities for electric cars will be doubled by 2025 to 5,000 units.

“The world has been watching Tokyo since the time it was chosen to host the Olympics,” said Hiroo Ichikawa, executive director of the Mori Memorial Foundation and professor emeritus of urban policy at Meiji University. He was involved in the creation of the city rankings.

Last year, about 14.24 million foreign nationals ― about the same number of people as the residents of Tokyo ― visited the Japanese capital. Tokyo promotes the use of information and communications technology and makes use of digital signs installed near stations to automatically transmit information to international tourists in different languages.

The signs guide tourists to places such as sightseeing attractions, in an attempt to overcome what was deemed Tokyo’s weak point in the city rankings: insufficient cultural interaction.