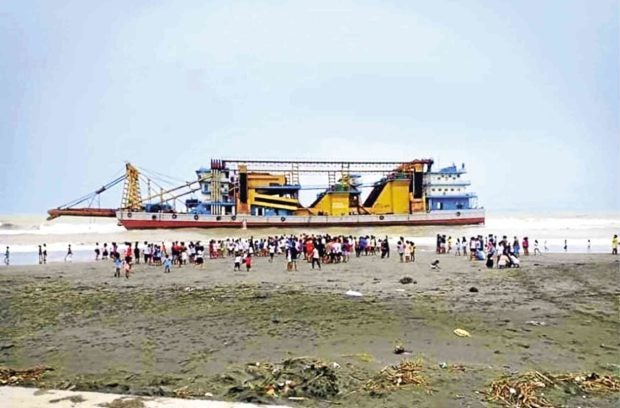 SAY IT AIN’T BLACK SAND MINING The presence of this dredging vessel at the mouth of Cagayan River in Aparri, Cagayan province, has caused an uproar among provincial board members who fear it is being used to extract black sand, which Gov. Manuel Mamba denies.
—PHOTO CONTRIBUTED BY GISING CAGAYAN

TUGUEGARAO CITY, Cagayan, Philippines — The Cagayan provincial board has asked President Rodrigo Duterte to stop dredging at the mouth of the Cagayan River that reportedly involves illegal extraction of black sand, or magnetite, an ore of iron used in steel production.

In a resolution approved on Aug. 7, the board members said the dredging being carried out by Pacific Offshore Exploration Inc. (POEI) posed a threat to the environment and livelihood of villagers.

“This is to be investigated as we appeal to the President (Duterte) to suspend the operation as the company has yet to comply with the requirements,” Board Member Mila Catabay-Lauigan said during the board’s regular session last week.

The provincial government entered into a memorandum of agreement with POEI for the dredging project in Aparri town in June.

Lauigan also claimed that the dredging vessel put the waste or nonmineral sand back into the river.

Another board member, Vilmer Viloria, said the dredging project had not been issued an environmental compliance certificate (ECC) and other permits, which, he noted, made the contractor’s operation illegal.

The board resolution said the contractor was earning about $50 million or P2.6 billion a month from the alleged black sand mining.

Residents near the Cagayan River said they had been seeing several dredging vessels with Chinese markings since July.

At the height of Typhoon “Hanna” (international name: Lekima) last week, one of the dredging vessels ran aground due to strong winds and rough waves, according to the Philippine Coast Guard.

Mamba said the dredging at the mouth of the Cagayan River would give way to the reopening of the Port of Aparri.

He also said the project would “improve economic and trade relations between Cagayan and China, and other neighboring Asian countries.”

“I would resign if they can prove that it is black sand mining. It is dredging, plain and simple,” Mamba told the Inquirer by telephone on Tuesday.

He said the company offered to dredge the river for free.

Mamba, who is also chair of the regional development council’s infrastructure development committee, approved a resolution on the reopening of the Aparri port in 2018.

On Aug. 6, the Aparri municipal council approved a separate resolution asking the Department of Environment and Natural Resources to issue a cease-and-desist order against POEI.

According to the council, the dredged materials were being transported abroad.

It added: “The operation is illegal and must be stopped immediately to avoid environmental hazards and threats to life and livelihood.”