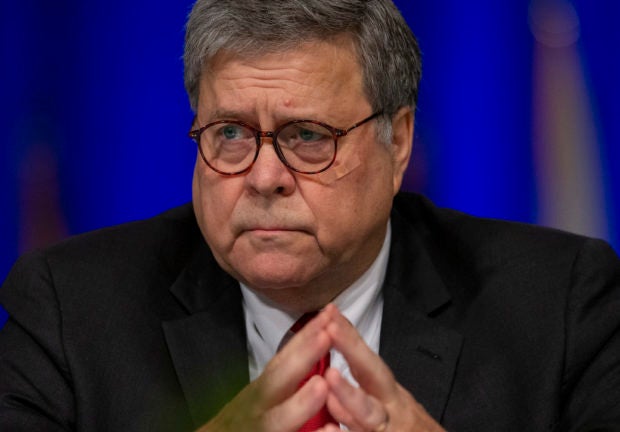 NEW YORK — In the wake of Jeffrey Epstein’s suicide, federal prosecutors in New York have shifted their focus to possible charges against anyone who assisted or enabled him in what authorities say was his rampant sexual abuse of underage girls.

Two days after the wealthy financier’s death in the New York jail where he was awaiting trial on sex-trafficking charges, Attorney General William Barr warned Monday that “any co-conspirators should not rest easy.”

“Let me assure you that this case will continue on against anyone who was complicit,” Barr said at a law enforcement conference in New Orleans. “The victims deserve justice, and they will get it.”

Authorities are most likely turning their attention to the team of recruiters and employees who, according to police reports, knew about Epstein’s penchant for underage girls and lined up victims for him. The Associated Press reviewed hundreds of pages of police reports, FBI records, and court documents that show Epstein relied on an entire staff of associates to arrange massages that led to sex acts.

If any of Epstein assistants hoped to avoid charges by testifying against him, that expectation has been upended by his suicide.

“Those who had leverage as potential cooperators in the case now find themselves as the primary targets,” said Jacob S. Frenkel, a former federal prosecutor. “They no longer have anyone against whom to cooperate.”

One possible roadblock to further charges is the controversial plea agreement Epstein struck more than a decade ago in Florida. The non-prosecution agreement not only allowed Epstein to plead guilty in 2008 to lesser state charges and serve just 13 months behind bars, it also shielded from prosecution several Epstein associates who allegedly were paid to recruit girls for him.

Federal prosecutors in New York, in charging Epstein last month, argued that the non-prosecution agreement is binding only on their counterparts in Florida.

But Gerald Lefcourt, a lawyer who negotiated the agreement, said the deal should still protect any alleged co-conspirators for what happened between 2001 and 2007.

“I would never have signed the agreement or recommended it unless we believed that it resolved what it said: all federal and state criminal liability,” Lefcourt said Monday.

Police reports say Epstein’s assistants worked like an advance team to facilitate his twice-daily massages, often from high school girls who were paid hundreds of dollars per “appointment.” Epstein’s personal assistant, Sarah Kellen, would call ahead to recruiters in Florida when Epstein was planning a trip to his Palm Beach mansion, the police reports also say.

Kellen, who is among four women named in the non-prosecution agreement, would allegedly greet girls arriving at the mansion and escort them to a room with a massage table where Epstein would be waiting, wearing only a towel. A 2008 lawsuit in Florida accused Kellen of not only scheduling encounters between Epstein and an underage girl but of taking nude photographs of her.

Kellen now goes by the name Sarah Kensington and runs an interior design firm. Her attorneys did not respond to requests for comment.

Epstein’s former girlfriend, British socialite Ghislaine Maxwell, was described in a 2017 lawsuit as the “highest-ranking employee” of Epstein’s alleged sex-trafficking enterprise. She oversaw and trained recruiters, developed recruiting plans, and helped conceal the activity from law enforcement, the lawsuit said.

Representatives of Maxwell have not responded to requests for comment. In sworn statements, she has denied any wrongdoing.

Another woman named in the non-prosecution agreement, Leslie Groff, was accused in a 2017 lawsuit of making travel arrangements for Epstein’s alleged victims and taking steps to ensure the girls complied with “the rules of behavior imposed upon them by the enterprise.”

Another alleged Epstein recruiter, Haley Robson, received $200 payments each time she escorted a new “masseuse” to Epstein’s home, according to police reports. Robson targeted girls from the rural area outside Palm Beach, where she grew up, lawsuits alleged, because Epstein believed they were less likely to complain to the authorities.

Robson likened herself to the so-called Hollywood Madam, Heidi Fleiss, in an interview with Palm Beach police, and said Epstein once admonished her for bringing a 23-year-old recruit to his home.

“He told her the younger the better,” a detective wrote in one police report.

Lawyers for those potential defendants are likely to seize on the wording in Epstein’s non-prosecution agreement that appears to tie the hands of the entire Justice Department when it comes to indicting co-conspirators, said David Weinstein, a former federal prosecutor in Miami who has followed the case closely.

He noted that the agreement states that “the United States” – not a specific prosecutor’s office – agreed not to charge anyone who assisted Epstein.

“The argument that’s going to be made by unindicted co-conspirators is that this paragraph was much broader than any other paragraph in the agreement,” Weinstein said. “I would argue that this was a very broad grant of transactional immunity.” /kga