Hunt on for Palparan 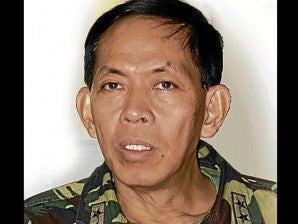 REVERSAL OF FORTUNE The tables have been turned: The hunter, Retired Major General Jovito Palparan Jr., is now the hunted.

The tables have been turned: The hunter is now the hunted.

Two days after Jovito Palparan Jr. was stopped at an airport in Pampanga province  from leaving the country, the government launched a manhunt for the retired major general tagged by activist groups as “Berdugo (Butcher)” for the string of extrajudicial killings and forced disappearances attributed to him.

A task force has been formed solely to find, arrest and detain Palparan since his foiled attempt to leave for Singapore on Monday, President Benigno Aquino III’s spokesperson, Edwin Lacierda, said Wednesday.

Formed by Justice Secretary Leila de Lima and Interior Secretary Jesse Robredo, the task force is made up of members of the Philippine National Police and the National Bureau of Investigation, Lacierda said.

The mother of one of two University of the Philippines students abducted in 2006 said that Palparan was “a coward” and that “we will search you out.”

In a statement issued by his office, Lacierda called on Palparan to stop hiding and surrender to authorities: “Come out, come out wherever you are.”

He said the man “formerly so bold and brazen, and lavishly coddled by the former administration, is now a fugitive from justice.”

In the City of San Fernando, Ricardo Diaz, head of the NBI office in Central Luzon, aired an appeal to Palparan to turn himself in after an NBI team assigned to serve an arrest warrant failed to find him.

Palparan, the former commander of the 7th Infantry Division, retired from military service in September 2006, less than three months after Sherlyn Cadapan and Karen Empeño were abducted in Hagonoy, Bulacan province.

Diaz said he and his men were hoping that Palparan would heed his appeal.

“He may be thinking about his options. I hope he turns himself in peacefully,” Diaz said.

Human rights groups in Central Luzon have counted over 700 incidents of human rights violations in the less than two years that Palparan was assigned to the region.

In an earlier telephone interview, Palparan said he would face the case and would not resist arrest. But he said he would ask his lawyer to file a petition to review the case.

When asked, Diaz said he believed that Palparan was evading arrest.

“He knew that a case had been filed against him and an arrest warrant had been issued. He should have turned himself in, but there has been no information [on his whereabouts] or any contact [initiated by] him,” Diaz told the Inquirer.

Judge Teodora Gonzales of Regional Trial Court Branch 14 in Malolos, Bulacan, issued separate warrants for the arrest of Palparan and his three coaccused on Monday afternoon. The Department of Justice (DOJ) had earlier approved the filing of charges of kidnapping and serious illegal detention against Palparan and the others in connection with the 2006 abduction of Empeño and Cadapan, who remain missing to this day.

No bail was recommended. Gonzales also issued hold-departure orders on the four accused on Tuesday afternoon. “[I]n order not to frustrate the ends of justice, the Department of Foreign Affairs and the Bureau of Immigration are hereby directed to include [Palparan et al.] in the hold-departure list,” the judge said.

Charged along with Palparan were Lt. Col. Felipe Anotado Jr., M/Sgt. Rizal Hilario of the 7th Infantry Division based in Fort Magsaysay, Nueva Ecija province, and S/Sgt. Edgardo Osorio, who is assigned to the Army’s 24th Intelligence and Security Group in Fort Bonifacio.

Osorio and Anotado surrendered to the Office of the Armed Forces’ Provost Marshal in Camp Aguinaldo on Tuesday afternoon.

Under military rules for noncommissioned officers, Osorio will face summary dismissal proceedings just for being charged in court, even if he is not found guilty. But he may be reinstated if he is cleared by the court.

Anotado has been relieved of his post. His relief will be in effect for the duration of the trial. But being a commissioned officer, he will not be discharged from the service until he is found guilty.

Hilario, the other coaccused, has been absent without leave from the Army since December 2008, according to records.

The mothers of the missing women called on the public to tip authorities on Palparan’s whereabouts.

“Palparan should be man enough to face up to his sins,” Erlinda Cadapan said in a briefing at the office of the human rights organization, Karapatan.

Concepcion Empeño said: “If you’re listening now, Jovito Palparan, you’re a coward. Mr. Empeño said ‘You don’t have any balls.’ We will search you out. [Produce] our daughters and other victims of forced disappearance. You’ll rot in jail with GMA (Arroyo) and Abalos.”

She was referring to former President Gloria Macapagal-Arroyo and former Election Chairman Benjamin Abalos, both of whom are now detained on charges of electoral sabotage.

The two mothers said that with the warrant out for Palparan’s arrest, they believed that “the day of reckoning” was fast approaching.

“The time has come for him to account for his crimes,” Concepcion Empeño said.

The mothers issued a joint statement calling on the public to “join us in this people’s manhunt to ensure that [Palparan] and his cohorts are immediately arrested, put to jail and prosecuted for the grave human rights violations they committed.”

“He should be jailed in the company of ordinary detainees before Christmas without any special treatment. He should be made to account for his actions,” Concepcion Empeño said in an interview.

Editha Burgos, the mother of another missing activist, Jonas Burgos, added her voice to the call.

“Let’s help out. We have to do what is right. If we don’t act, then we’re siding with evil. We can’t do this alone. You know his face; it’s splashed on the papers. He may be smoking a cigarette by your side. He could be leaning out his window. He could be lolling in his garden, playing with his dog,” Burgos said at the briefing.

Echoing the other mothers, she appealed to the captors of the missing women “to do what is right.”

“Do what your conscience dictates and what God wants. Rest assured we’ll pray for you to have the strength to do this,” she said.

The DOJ recommendation to file charges against Palparan et al. and the court’s issuance of warrants for their arrest have spurred relatives of the disappeared to press on with their search for justice.

“It has given us joy that something [like this] could happen,” Burgos, widow of the late press freedom icon Jose Burgos, said in an interview. “We’re realistic to know that it won’t happen overnight. This initiative will spur us to go on.”

Burgos said the day of reckoning was “coming very, very soon” for the perpetrators of disappearances and abductions.

“This should open the eyes of those holding Sherlyn and Karen and all the disappeared to come out and come clean, to lessen their culpability,” she said. “I’m sure Palparan will bring down many people.”

Not in Taguig,  Pateros

The NBI’s Diaz said his men went to Palparan’s house in Taguig City on Tuesday to serve the warrant but were told by the latter’s tenants that he rarely visited the place.

The team also failed to find Palparan in his wife’s house in Pateros town in Metro Manila, Diaz said.

The man could not be reached since Tuesday night; his mobile phone had been turned off.

De Lima also called on Palparan to yield to authorities to spare the government from using its resources in hunting him down.

“We very well know the principle that flight is an indication of guilt. If he’s really innocent, he would bravely face the charges against him,” De Lima said.

The lawyer of the families of Karen Empeño and Sherlyn Cadapan likewise challenged Palparan to turn himself in.

“Palparan is hopelessly incorrigible and his braggadocio is incomparable. He should face the music and leave the lawyering to his counsels,” Edre Olalia said in a statement. “He must give himself up now and stop being the coward and heartless creature that he really is.” Reports from Christine O. Avendaño, TJ Burgonio, Marlon Ramos and Dona Z. Pazzibugan in Manila; Tonette Orejas and Carmela Reyes-Estrope, Inquirer Central Luzon