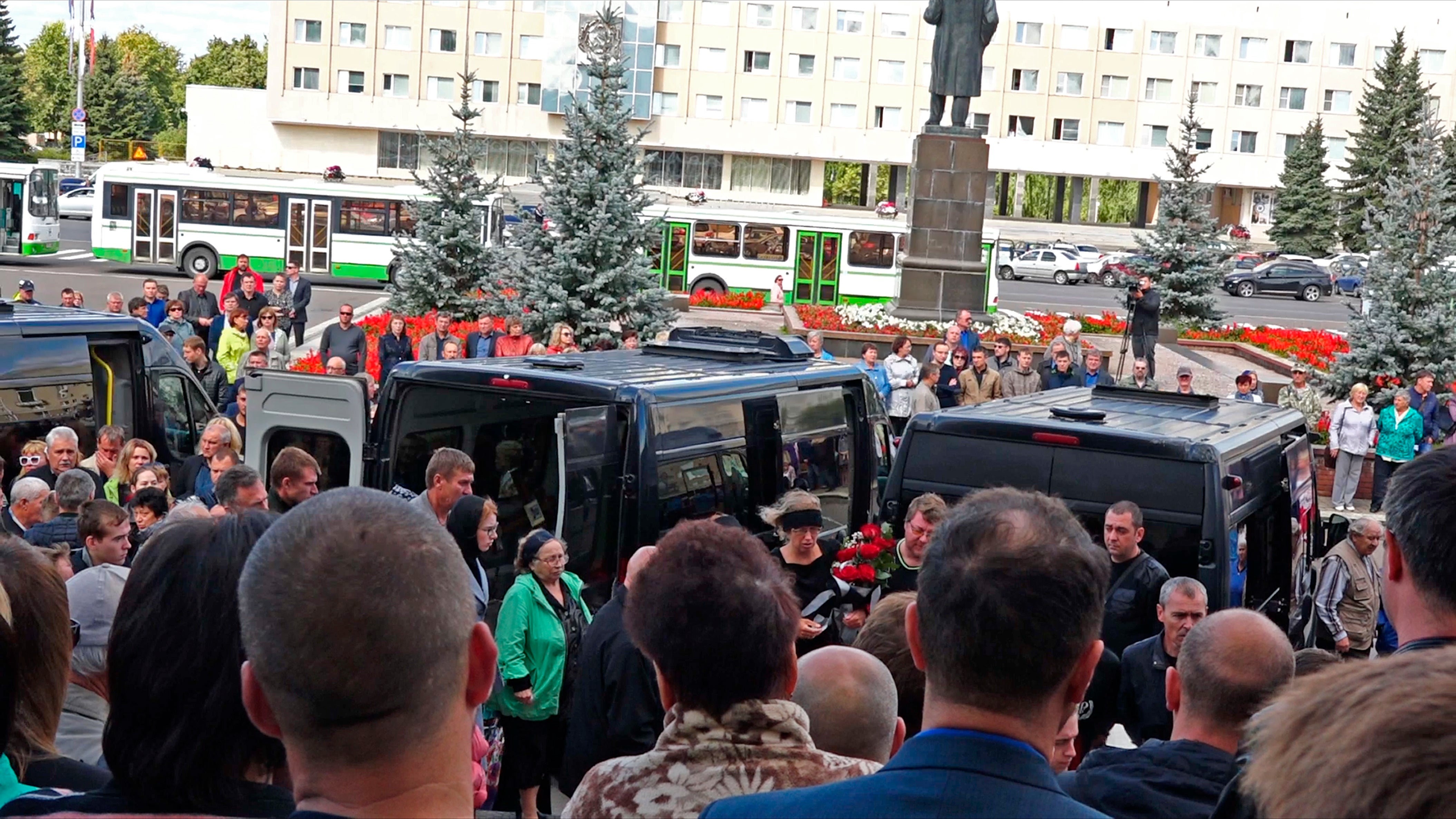 MOSCOW  — Thousands of people attended the funerals Monday of five Russian nuclear engineers killed by an explosion as they tested a new rocket engine, a tragedy that fueled radiation fears and raised questions about a secretive weapons program.

The engineers, who died Thursday, were laid to rest Monday in Sarov, which hosts Russia’s main nuclear weapons research center, where they worked. Flags flew at half-staff in the city 370 kilometers (230 miles) east of Moscow that has been a base for Russia’s nuclear weapons program since the late 1940s. The coffins were displayed at Sarov’s main square before being driven to a cemetery.

The Defense Ministry initially reported the explosion at the navy’s testing range near the village of Nyonoksa in the northwestern Arkhangelsk region killed two people and injured six others. The state-controlled Rosatom nuclear corporation then said over the weekend that the blast also killed five of its workers and injured three others. It’s not clear what the final toll is.

The company said the victims were on a sea platform testing a rocket engine and were thrown into the sea by explosion.

Rosatom director Alexei Likhachev praised the victims as “true heroes” and “pride of our country.”

“Our further work on new weapons that we will certainly complete will be the best tribute to them,” Likhachev said during the funeral, according to Rosatom. “We will fulfill the Motherland’s orders and fully protect its security.”

Rosatom said the explosion occurred while the engineers were testing a “nuclear isotope power source” for a rocket engine. Local authorities in nearby Severodvinsk, a city of 183,000, reported a brief spike in radiation levels after the explosion, but said it didn’t pose any health hazards.

Still, the statement from Severodvinsk’s administration came just as the Defense Ministry insisted that no radiation had been released, a claim that drew comparisons to Soviet-era attempts to cover up catastrophes. Spooked residents rushed to buy iodide, which can help limit the damage from exposure to radiation.

Following the explosion, Russian authorities also closed part of Dvina Bay on the White Sea to shipping for a month, in what could be an attempt to prevent outsiders from seeing an operation to recover the missile debris.

The Severodvinsk city administration said the radiation level rose to 2 microsieverts per hour for about 30 minutes on Thursday before returning to the area’s natural level of 0.1 microsieverts per hour. Emergency officials issued a warning to all workers to stay indoors and close the windows.

Russian environmental groups have urged the government to release details of the radioactive leak, but officials offered no further details.

Neither the Defense Ministry nor Rosatom mentioned the type of rocket that exploded during the test, saying only that it had liquid propellant.

But Rosatom’s mention of a “nuclear isotope power source” led some Russian media to conclude it was the Burevestnik (Petrel), a nuclear-powered cruise missile first revealed by Russian President Vladimir Putin in March 2018 during his state of the nation address along with other doomsday weapons.

President Donald Trump weighed in Monday on the blast, tweeting, “The United States is learning much from the failed missile explosion in Russia. We have similar, though more advanced, technology. The Russian ‘Skyfall’ explosion has people worried about the air around the facility, and far beyond. Not good!”

The U.S. and the Soviet Union pondered nuclear-powered missiles in the 1960s, but they abandoned those projects as too unstable and dangerous.

While presenting the new missile, Putin claimed it will have an unlimited range, allowing it to circle the globe unnoticed, bypassing the enemy’s missile defense assets to strike undetected.

The president claimed the missile had successfully undergone the first tests, but observers were skeptical, arguing that such a weapon could be very difficult to handle and harmful to the environment.

Some reports suggested previous tests of the Burevestnik missile had been conducted on the barren Arctic archipelago of Novaya Zemlya and the Kapustin Yar testing range in southern Russia before they were moved to Nyonoksa. Moving the tests from unpopulated areas to a range close to a big city may reflect the military’s increased confidence in the new weapon.

The Sarov nuclear center director, Valentin Kostyukov, said that the victims tried but failed to prevent the explosion. “We saw that they were trying to regain control over the situation,” he said.

Sergei Kirienko, Putin’s deputy chief of staff who previously led Rosatom, said at the funeral that the victims were aware of the danger, but “took the risk, realizing that no one else would do the job better than them.” He said they would be posthumously awarded with top medals. /muf