New rules to deny green cards to many legal immigrants

WASHINGTON – The Trump administration announced Monday it is moving forward with one of its most aggressive steps yet to restrict legal immigration: Denying green cards to many migrants who use Medicaid, food stamps, housing vouchers or other forms of public assistance. 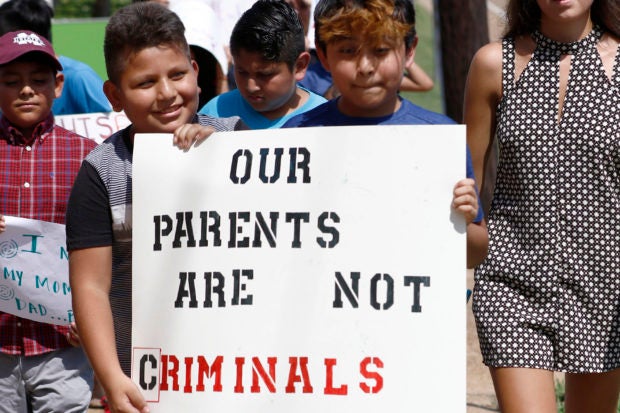 FILE – In this Aug. 11, 2019 photo, children of mainly Latino immigrant parents hold signs in support of them and those individuals picked up during an immigration raid at a food processing plant, during a protest march to the Madison County Courthouse in Canton, Miss., following a Spanish Mass at Sacred Heart Catholic Church in Canton. Trump administration rules that could deny green cards to immigrants if they use Medicaid, food stamps, housing vouchers or other forms of public assistance are going into effect. (AP Photo/Rogelio V. Solis)

Federal law already requires those seeking to become permanent residents or gain legal status to prove they will not be a burden to the U.S. — a “public charge,” in government speak —but the new rules detail a broader range of programs that could disqualify them.

It’s part of a dramatic overhaul of the nation’s immigration system that the administration has been working to put in place, despite legal pushback. While most attention has focused on President Donald Trump’s efforts to crack down on illegal immigration, including recent raids in Mississippi and the continued separation of migrant parents from their children, the new rules target people who entered the United States legally and are seeking permanent status.

Trump is trying to move the U.S. toward a system that focuses on immigrants’ skills instead of emphasizing the reunification of families.

Under the new rules, U.S. Citizenship and Immigration Services will now weigh whether applicants have received public assistance along with other factors such as education, income and health to determine whether to grant legal status.

The rules will take effect in mid-October. They don’t apply to U.S. citizens, though immigrants related to the citizens may be subject to them.

Ken Cuccinelli, acting director of Citizenship and Immigration Services, said the rule change will ensure those who come to the country don’t become a burden, though they pay taxes.

“We want to see people coming to this country who are self-sufficient,” Cuccinelli said. “That’s a core principle of the American dream. It’s deeply embedded in our history, and particularly our history related to legal immigration.”

Migrants make up a small percentage of those who get public benefits. In fact, many are ineligible for such benefits because of their immigration status.

Immigrant rights groups strongly criticized the changes, warning the rules would scare immigrants away from asking for needed help. And they voiced concern the rules give officials too much authority to decide whether someone is likely to need public assistance in the future.

The Los Angeles-based National Immigration Law Center said it would file a lawsuit, calling the new rules an attempt to redefine the legal immigration system “in order to disenfranchise communities of color and favor the wealthy.”

And David Skorton, president and CEO of the Association of American Medical Colleges said, “The consequences of this action will be to potentially exacerbate illnesses and increase the costs of care when their condition becomes too severe to ignore,”

“This change will worsen existing health inequities and disparities, cause further harm to many underserved and vulnerable populations and increase costs to the health care system overall, which will affect all patients,” he said in a statement.

Cuccinelli defended the move, insisting the administration was not rejecting long-held American values.

Pressed on the Emma Lazarus poem emblazoned below the Statue of Liberty that reads: “Give me your tired, your poor, your huddled masses yearning to breathe free,” he told reporters at the White House: “I’m certainly not prepared to take anything down off the Statue of Liberty.” /gsg