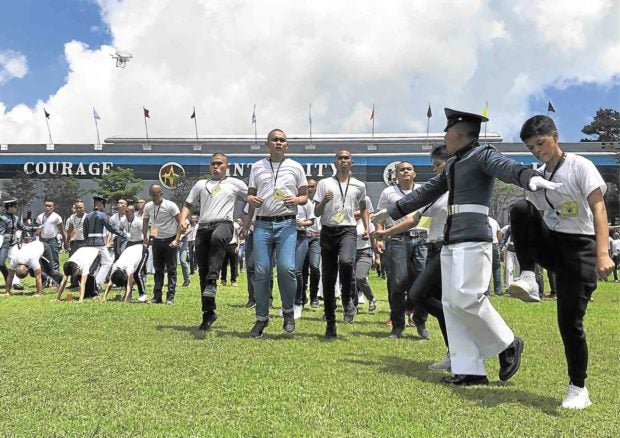 FORT DEL PILAR, Baguio City, Philippines — Ernesto Benitez Jr. had lost his father by the time he entered the Philippine Military Academy (PMA) as a cadet in 1979.

His brothers lived in Quezon City, an eight-hour travel by bus to this city at the time. Homesick and battered by fatigue due to the extreme demands in the classroom and from physical training, Benitez said he found succor from the family of Baguio educator Virgilio Bautista, his designated foster parent.

Now in his 60s after retiring in 2012 from the Department of National Defense, Benitez attended a program here on Saturday to honor Bautista and 20 other pioneer Baguio families who offered their homes to PMA cadets.

The foster care program had officially become the PMA Host Parents Association, which celebrated its 40th anniversary with a parade under fog and rain and a testimonial by members of PMA “Sandigan” Class of 1982.

Given the rigor and stress of cadet training, being alone could terrorize every cadet who was far from home, said lawyer Edilberto Tenefrancia, a pioneer host parent.

“When you come to PMA at a very young age, most of you are separated from your families probably for the first time. And that’s a traumatic experience,” Tenefrancia said.

“But when you are thrown into higher education with a curriculum that is very strict [and] very rigorous, the separation becomes all the more emphasized and that’s where you need support from those who may substitute for your family,” he said.

Tenefrancia, a former city vice mayor and councilor, said this was the insight that inspired Brig. Gen. Angel Kanapi, then PMA superintendent, and the pioneer families to initiate the foster care program.

Having someone to run to helped cadets who came from the Visayas, said Lyndel Desquitado, a retired police general. “Because the distance was vast, I never saw my parents until graduation,” said Desquitado, whose last posting was in Northern Mindanao.

“Even my father was unable to attend [my graduation] because of his health. [Having foster parents in Baguio] meant a lot to us Visayans. During Saturdays, when we did not have any place to go, the feeling of homesickness was cured by meals cooked by them,” he said.

Most cadets were only given limited recreational time during weekends, and military rules were so strict “they could only proceed and return from the activity for which they secured permission to attend,” said Bautista, whose family owns the University of Baguio.

“Having foster parents meant we could bring them out for lunch or dinner or for a walk, and that was allowed,” he said.

Providing cadets a family, food and moral guidance was “the least that the city of Baguio can do for you,” Tenefrancia said. “Cadets are at the threshold of a career where they will be—not only leaders of the military but also leaders of the nation.”