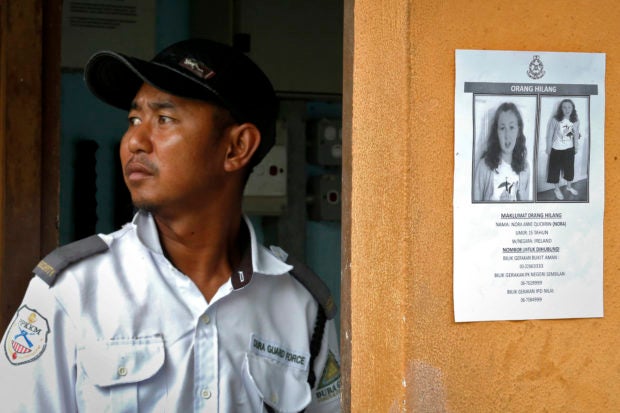 A security guard stands next to a notice showing a missing British girl in Seremban, Malaysia, Sunday, Aug. 11, 2019. The parents of 15-year-old London girl Nora Anne Quoirin who mysteriously disappeared from a Malaysian resort a week ago said Saturday that she wasn’t independent and had difficulty walking, in new details to support their conviction that she was abducted. (AP Photo/FL Wong)

SEREMBAN, Malaysia — A Malaysian shaman has joined police from Ireland, France, and the United Kingdom in the search for a 15 -year-old London girl who disappeared from a nature resort eight days ago.

Nora Anne Quoirin’s family discovered her missing from the Dusun eco-resort in southern Negeri Sembilan state on August 4, in a case that has baffled the police and turned up no evidence so far.  Police have listed her as a missing person but do not rule out a possible criminal element.

Negeri Sembilan deputy police chief Che Zakaria Othman said the search team has been expanded to 348 people, with the hunt now shifted to the nearby Berembun forest reserve.