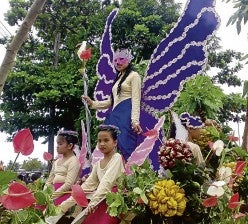 GIRLS dressed as butterflies took the streets during the Bila-Bila Festival in Marinduque. PHOTO BY GERALD GENE QUERUBIN

Dressed in colorful butterfly and flower costumes, hundreds of teenagers and students transformed the heart of Boac in Marinduque into a grand garden to highlight the celebration of the Bila-Bila (Butterfly) Festival on Dec. 8.

Now on its second year, the spectacle, which coincided with the feast of the town’s patroness, the Our Lady of Immaculate Conception, was meant to promote the island-province’s butterfly industry, said Councilor Sonny Paglinawan, the festival chair.

It stemmed from Boac’s tree farming and butterfly propagation ordinance, which aimed to encourage reforestation and promote the butterfly industry throughout Marinduque.

It has the most number of butterfly species in the country and its technology in butterfly farming and research are more advanced than those of other provinces, Paglinawan said. Three out of four butterfly breeders nationwide are based in Marinduque.

Moreover, he said, the festival could boost the province’s tourism industry.

Panchito Labay, an environmental science teacher at Marinduque State College who is popularly called “Professor Butterfly” because of his numerous research and studies on the insect, agreed on the intent of the festival but disagreed on its date.

“Dec.  8 is for the feast of the Our Lady of the Immaculate Conception. It would be better to hold the festival during the month of May, which is the month of flowers,” Labay said.

“Celebrating the festival in May is more in consonance with the blooming of the flowers and host plants. Butterflies are more abundant during May because the flowers easily attract them,” he added.

He believed that more tourists would come to see the festival if it were staged in May. 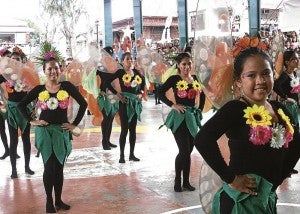 Flowers, butterflies, and a friendly smile from a participant complete the Bila-Bila Festival of Marinduque. PHOTO BY GERALD GENE QUERUBIN

“Marinduque will be able to sustain its brand as the country’s butterfly capital because farmers from Palawan and Mindoro always look at the province as the most lucrative market for their pupas and butterflies,” Labay said.

“Also, our local exporters have a vast network of buyers of butterflies, live and dead stock alike, from other countries than those from the other provinces,” he said.