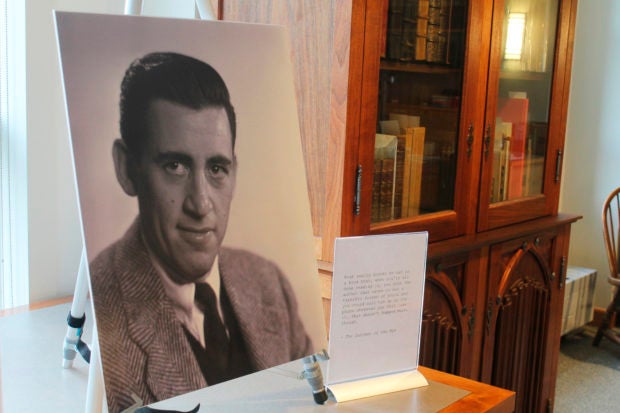 FILE – In a Tuesday, Jan. 22, 2019 file photo, a previously unseen photo of author J.D. Salinger is displayed at the University of New Hampshire in Durham, N.H. ‘The Catcher in the Rye’ author is going digital The late J.D. Salinger is giving in to the digital revolution. Longtime Salinger publisher Little, Brown and Company says it’s the first time that the entirety of Salinger’s published work, including “The Catcher and the Rye,” will be available as e-books. The electronic publication is happening Tuesday, August 13, 2019. (AP Photo/Holly Ramer, File)

Longtime Salinger publisher Little, Brown and Company said all four of his works, including “The Catcher in the Rye,” will be made available as e-books Tuesday, marking the first time that the entirety of his published work will be available in digital format.

His son, Matt Salinger, said the digital holdout ended because many readers use e-books exclusively and some people with disabilities can only use them.

“There were few things my father loved more than the full tactile experience of reading a printed book, but he may have loved his readers more — and not just the ‘ideal private reader’ he wrote about, but all his readers,” said Salinger, who helps oversee his father’s literary estate.

In addition to “The Catcher in the Rye,” the e-books include “Nine Stories,” ”Franny and Zooey,” and “Raise High the Roof Beam, Carpenters and Seymour: An Introduction.”

The electronic publication continues a yearlong centennial celebration of author’s birth and his contributions to literature.

Salinger, who died in 2010, lived a reclusive life in Cornish, New Hampshire, and rarely spoke to the media. He not only stopped releasing new work, but rejected any reissues or e-book editions.

But things are changing. In addition to the e-books, there have been new covers and a boxed edition.

Matt Salinger also has said unpublished work by his late father will be coming out. But he said any publication of new works may be years away. /gsg