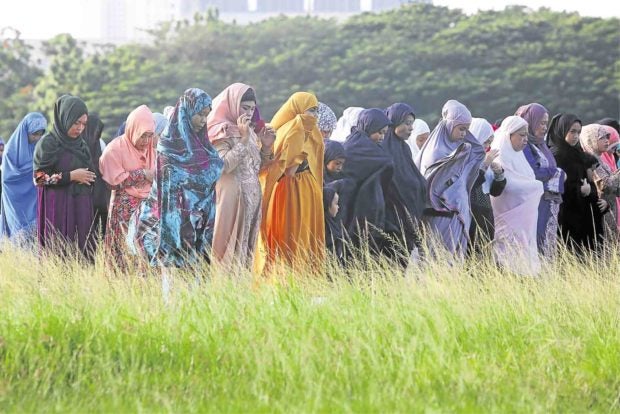 CALL TO PRAYER Muslim women gather for prayer near Rizal Park’s Quirino Grandstand on Sunday morning, eve of the Islamic holiday Eid al-Adha, which commemorates Ibrahim’s willingness to sacrifice his son Ismail out of obedience to God. It’s also known as the “Festival of the Sacrifice.” —MARIANNE BERMUDEZ

Aid agencies like Islamic Relief, a humanitarian relief organization, provided meat packs to Marawi residents on Sunday as part of the observance of Eid al-Adha, or the Feast of the Sacrifice.

Eid al-Adha is one of Islam’s biggest holidays and honors Ibrahim’s (Abraham for the Judeo-Christian tradition) willingness to sacrifice his son to honor Allah.

In Saudi Arabia, nearly 2.5 million Muslims gathered at Mount Arafat on Saturday for a vigil to atone for their sins, and then descended to Muzdalifa for the final stages of the annual hajj pilgrimage amid summer heat and regional tensions.

It is also where Prophet Mohammad gave his last sermon.

Other worshippers who had been praying in the nearby Mina area ascended in buses or on foot from before dawn.

In his Eid al-Adha message on Sunday, President Duterte called for the offering of personal sacrifice for the sake of the common good.

Ibrahim’s willingness to follow God’s will, the President said, “not only teaches us the importance of personal sacrifice, but also inculcates in us the value of submission to a higher authority, even though, at times, our feelings and emotions compel us otherwise.”

“Now, more than ever, we are called to lend a piece of ourselves to endeavors that redound to the common good and benefit the most number of people,” he said.

Vice President Leni Robredo has asked for prayers for Marawi residents who were displaced by the five-month siege and are still awaiting opportunity to rebuild their lives.

The observance of Eid al-Adha among Maranaos has sparked fresh thoughts about the pace of work on rebuilding their homes in Marawi. The city was ravaged by a five-month-long siege by Islamic State-linked militants two years ago.

For the first time, a government official has admitted to problems bugging the scheduled return of the residents.

On Sunday, Marawi leaders bewailed their absence in the city for Eid al-Adha, urging the Task Force Bangon Marawi (TFBM) to speed up reconstruction.

“We are fed up with government promises. We will reconstruct our lives even without government help,” said Aga Khan Sharief, a local religious and civic leader.

Samira Gutoc, a former Autonomous Region in Muslim Mindanao legislator, said it would have been different that on occasions like Eid al-Adha, the displaced would be in the comforts of their homes and the embrace of their communities.

“Marawi will never be a Marawi again if we are not free to walk on these two places,” she added.

For two successive years, more than 17,000 families, who used to live in 24 barangays of what is now known as the “most affected areas (MAA)” of Marawi, spent Eid al-Adha in tents and more comfortable but still cramped shelters.

Their scheduled return by September 2019 has been plagued by a host of problems like unrecovered unexploded ordnance and the reluctance of owners to have authorities demolish their buildings, according to TFBM field manager Felix Castro.

Even the Kathanor program that profiles those who were really Marawi residents has been swamped by spurious or fake documents and claims, necessitating validation, Castro said.

As of June 28, he said, the program had reduced the number of affected families from around 60,000, as claimed by nongovernment groups, to 47,179.

Of the current figure, 17,791 families are from 24 barangays in the MAA, Castro said, while the rest, or 28,388 families, were from outside the areas.

Last month, in the run-up to Mr. Duterte’s State of the Nation address, Housing Secretary Eduardo del Rosario, TFBM chair, repeated his pledge last March to bring Marawi residents back to their homes in the MAA by September.

The TFBM has targeted completion of debris clearing by next month.

But the demolition of ruined buildings has been slowed down by unexploded ordnance still under the ruins.

On Aug. 3, the military presided over the detonation of a host of bombs and other ordnance.

But there are still 46 more bombs that need to be searched under the ruins and exploded to make it safe for workers to clear the mountains of war debris.

Castro said many residents had yet to give approval for Army engineers to demolish their buildings, further delaying the debris clearing process.—With reports from Leila B. Salaverria and the wires