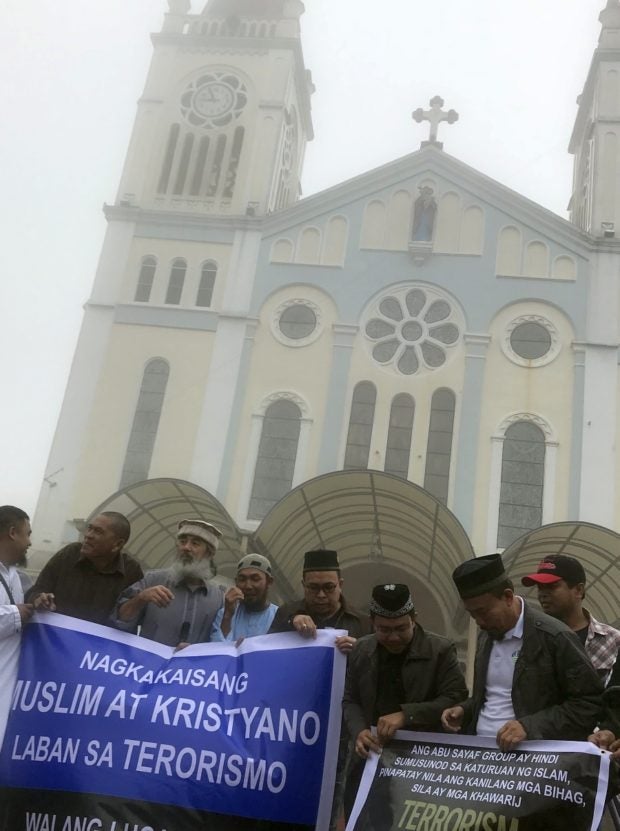 SOLIDARITY MESSAGE Outside the Baguio Cathedral, churchgoers’ attention on Sunday was drawn to tarpaulins showing messages against extremists and terrorists. “We are here to stand side by side with them against terrorism,” said Imam Samsodin Monib, president of the Baguio Muslim Community. —VINCENT CABREZA

BAGUIO CITY—Churchgoers were surprised on Sunday morning when Muslims joined them for a Mass at the Baguio Cathedral, a site popular among residents and tourists.

Sunday was also Eid al-Adha (The Feast of Sacrifice), but leaders of the local Islamic community spent the day securing the church in light of a leaked military report about terror plans targeting churches and pilgrimage sites in northern Luzon.

“We want to assure our Baguio neighbors we are not here to harm anyone. We are here to stand side by side with them against terrorism,” said Imam Samsodin Monib, president of the Baguio Muslim Community.

The offer of the Muslim community included guarding all churches in Baguio, joining police patrols and securing religious centers.

Mayor Benjamin Magalong said the idea of protecting churches came from the Islamic leaders after a military memorandum dated Aug. 2 was accidentally made public online.

According to the memo, extremists may target “Crusader Churches (a term the Islamic State [IS] terrorist group uses for Catholic churches)” in Laoag City in Ilocos Norte province, Vigan City in Ilocos Sur province, Manaoag town in Pangasinan province, and Tuguegarao City in Cagayan province.

Churchgoers who attended Mass at the Our Lady of Manaoag Church, another popular pilgrimage site, were guarded by three teams of policemen and soldiers.

The security measures were not meant to alarm residents, according to the town’s mayor, Kim Amador.

The threat spread fast through social media, but Amador assured the public that no evidence had been uncovered so far to indicate an attack was imminent.

“If they put themselves in the shoes of the terrorists, where will they be, where is their point of entry, how will they camouflage themselves, what are the areas where they will hide?” Mangelen said.

The police council will coordinate with the Pangasinan Muslim Association.

Magalong said the memorandum from the military’s Northern Luzon Command was authentic, but the contents were still being validated.

Muslims in Baguio will be the first to respond “if extremists attack your church and our church,” Monib told parishioners after the Mass at the cathedral.

Between 8,000 and 10,000 Muslims, half of them Baguio residents and registered voters, would “bleed like Christians” should an attack prove successful, he said.

“If our left part of the body is hurt, won’t the right side hurt, too? If our toes are injured, won’t our eyes tear up?” Monib said.

“Whatever you now feel … Anxiety? Terror? We Baguio Muslims have the same fears,” he said, adding: “With the threat of terrorism, too many accusations have been hurled about Muslims.”

“So we stand before you today to express our sincerity … God created everyone to be the same,” Monib said.

Outside the cathedral, people’s attention was drawn to tarpaulin signs showing messages against extremists and terrorists.

One banner said: “The enemy is not Muslim or Christian. The real enemy is Extremism.”

Another said, “[IS] is not Islam. Terrorism has no religion,” while a third said, “Nagkakaisa Muslims at Christians laban sa terorismo (Muslims and Christians united against terrorism).”

“Terrorism will prevail if we let fear get the better of us, and continue to sow wrong information,” Amador said. “We ask everyone to unite, to be watchful of any suspicious activities, things, or activities, and immediately notify any police station.”

Mayor Magalong said residents should start watching their surroundings because “Sept. 11 is fast approaching and [that date] is significant when we talk about terrorism.”

On Sept. 11, 2001, al-Qaida terrorists hijacked commercial planes and crashed them into the World Trade Center in New York City and the Pentagon in Washington, DC. Close to 3,000 people died.

“We cannot wait. We cannot just be complacent. In Israel, when a package is left unattended, this is immediately reported. We encourage parishioners to do the same,” Magalong said.