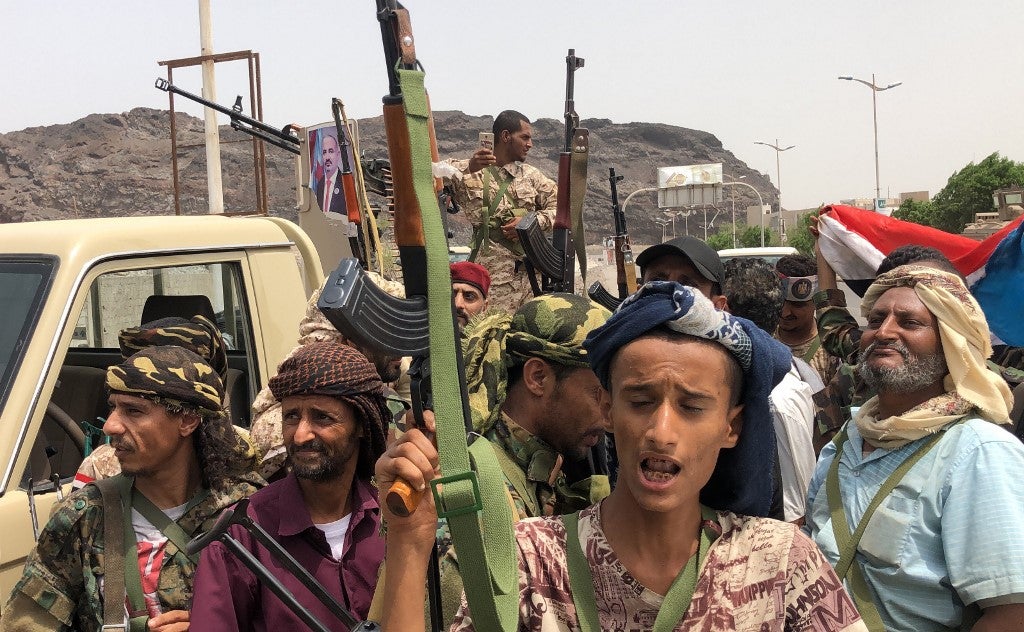 Yemeni supporters of the southern separatist movement pose for a picture in Khor Maksar, in the Yemeni southern port city of Aden on August 10, 2019. – Southern separatists in Yemen said on August 10 that they had seized the presidential palace in second city Aden after fierce battles with loyalist forces. The deadly clashes reflect deep divisions between secessionists and loyalist forces, both of whom have fought Shiite Huthi rebels. (Photo by Nabil HASAN / AFP)

ADEN, Yemen — A Saudi-led coalition said Sunday it launched a strike apparently against southern separatists in Yemen after they seized the presidential palace in the second city Aden.

The seizure, decried by the Riyadh-backed Yemeni government as a UAE-supported coup, reflects deep divisions between secessionists and loyalist forces, both of whom have fought Shiite Huthi rebels.

“The coalition targeted an area that poses a direct threat to one of the important sites of the legitimate government,” a coalition statement said, calling on the separatist Southern Transitional Council to withdraw from positions seized in Aden or face further attacks.

Riyadh-based Yemeni President Abedrabbo Mansour Hadi is backed by the coalition — led by Saudi Arabia and its ally the United Arab Emirates — that is battling the Huthis who hail from Yemen’s north.

But another force in the anti-Huthi coalition — the UAE-trained Security Belt Force — has since Wednesday been battling loyalists in Aden, the temporary base of Hadi’s government.

The Security Belt Force is dominated by fighters who back the Southern Transitional Council (STC), which seeks to restore south Yemen as an independent state as it was from 1967-1990.

A Security Belt official told AFP Saturday the force had seized the presidential palace — largely symbolic, due to Hadi’s absence — without a fight.

“Two hundred soldiers from the Presidential Guard were given safe passage out of the palace,” the official said.

A witness confirmed the complex had been handed over.

The coalition called for an “immediate ceasefire”, a spokesman was quoted as saying by the official Saudi Press Agency, and demanded an “urgent meeting” between the warring parties.

Both the Yemeni government and separatists said early Sunday they backed Riyad’s call for dialogue and a suspension of fighting in Aden.

Yemen’s government earlier blamed the STC and the UAE for staging a  “coup” against it.

The foreign ministry demanding “the UAE halt its material support and withdraw its military support, immediately and fully, from the groups that have rebelled against the state”.

The STC’s spokesman said Saturday the situation was “stable” and that the council was working to restore the water network, damaged in the fighting.

But the International Crisis Group think tank warned that the latest clashes “threaten to tip southern Yemen into a civil war within a civil war.”

“Such a conflict would deepen what is already the world’s worst humanitarian crisis and make a national political settlement harder to achieve,” it said.

Ties between the Security Belt and Hadi loyalists have been strained for years, and this week was not the first time they have engaged in armed clashes.

They fought a three-day battle in January 2018 that killed 38 people and wounded 222 others after the government prevented a rally by separatists.

The Security Belt has accused Hadi’s backers of allowing Islamists into their ranks and of supporting the Muslim Brotherhood.

The Saudi-led military coalition intervened in Yemen in 2015 to back the government against the Huthis, who are supported by Riyadh’s regional rival Iran.

The Huthis had overrun large parts of northern and western Yemen, including the capital Sanaa, which they still control.

He added that the two camps should focus their efforts on fighting the Huthis instead of each other.

The latest upsurge in fighting flared on Wednesday during the funeral of a senior Security Belt commander killed earlier this month in a drone and missile attack on a training camp west of Aden.

The commander was among 36 people killed — many of them newly graduated cadets — in the aerial attack, claimed by the Huthis.

The fighting has left at least 18 dead and scores wounded, medics and security sources have said.

On Friday, Doctors Without Borders (MSF) tweeted that it had treated 75 people in one of its hospitals in Aden since Thursday night.

Since 2015, fighting between the Huthis and Yemeni loyalists backed by the Saudi-led coalition has killed tens of thousands of people, mostly civilians, aid agencies say.

The conflict has also forced some 3.3 million people from their homes, according to the UN.

It says over 24 million people, some 80 percent of the population, need humanitarian aid.