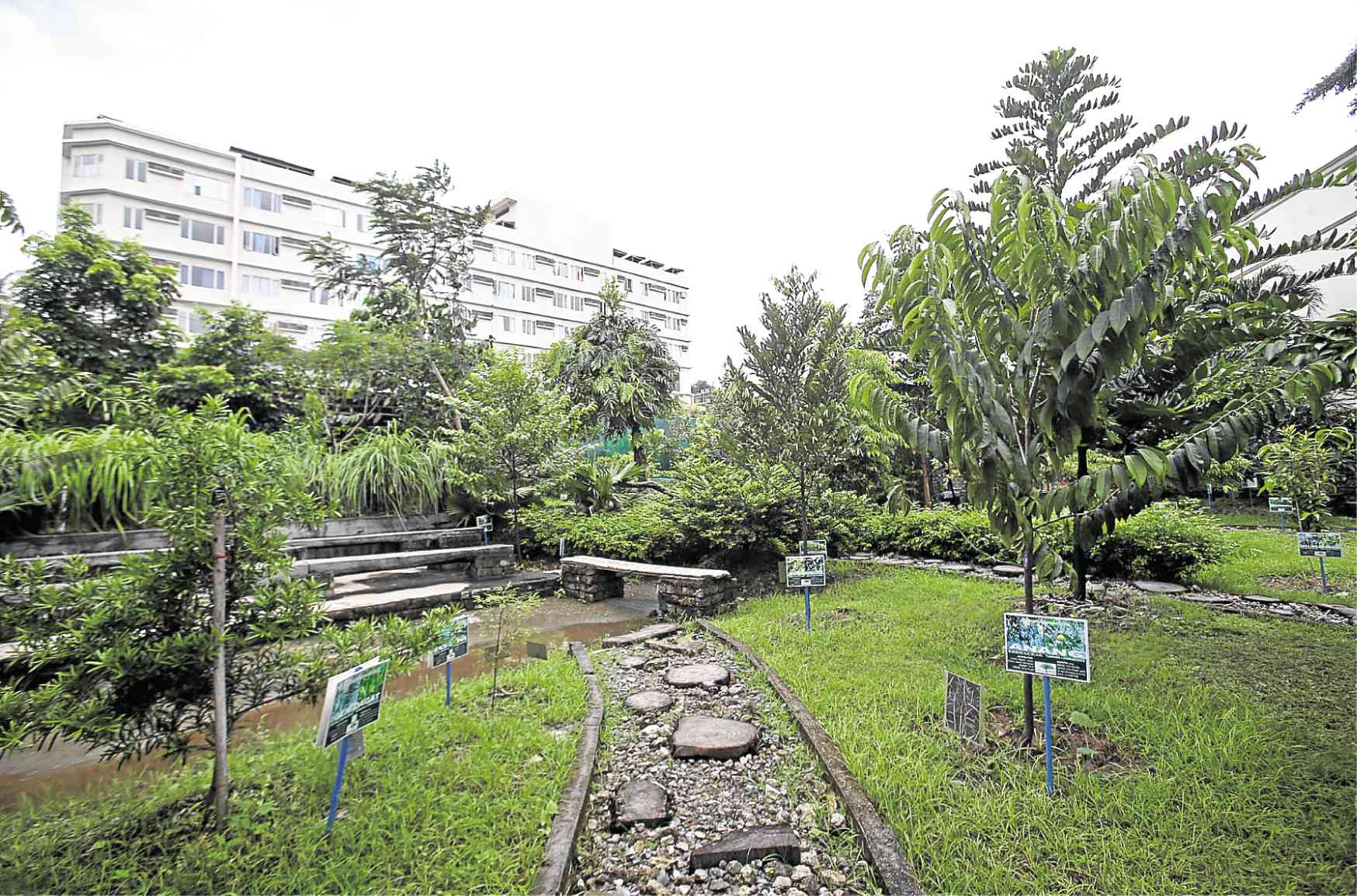 At one point in that rain-soaked morning, Manila Mayor Francisco “Isko Moreno” Domagoso rather dramatically asked the women who welcomed him at College of the Holy Spirit on Mendiola (CHSM): Where were you all these years that Manila needed you?

It was Aug. 3, a stormy Saturday, yet here he was at the CHSM campus at 8:30 a.m., one and a half hours earlier than scheduled, despite having suspended classes at all levels and issued flood warnings in the city.

Earlier in his car, responding to a radioed message from the event’s organizers to proceed to the CHSM boardroom for breakfast, the mayor cheerfully refused and said he wanted to get down to the business of planting right away: “’Wag na. Gusto ko nang magtanim!”

The occasion was Thanksgiving Day at the Laudato Si Garden of Native Trees, a project of the CHS High School Class of 1965 in partnership with the CHS Alumnae Foundation Inc. Mayor Domagoso had been invited to plant trees to add to the now flourishing 1,000-square-meter garden on campus where indigenous trees are planted, such as yakal, agoho, apitong, bagtikan, banaba, bignay, lauan, pili and molave.

Formally opened in March 2018, the garden is named after Pope Francis’ encyclical on global warming and other environmental issues, and is CHSM’s response to his call to the faithful to come to the aid of the warming planet.

It was once an idle piece of land on campus but its greenery has now, river-like, breached its banks, so that 180 native trees have now been planted and even beyond its borders. Its movers and shakers had envisioned it as “a concrete way of addressing issues on environmental degradation” by planting native trees, where “the beauty of our flora is magnified and biodiversity in our area is richly multiplied.” 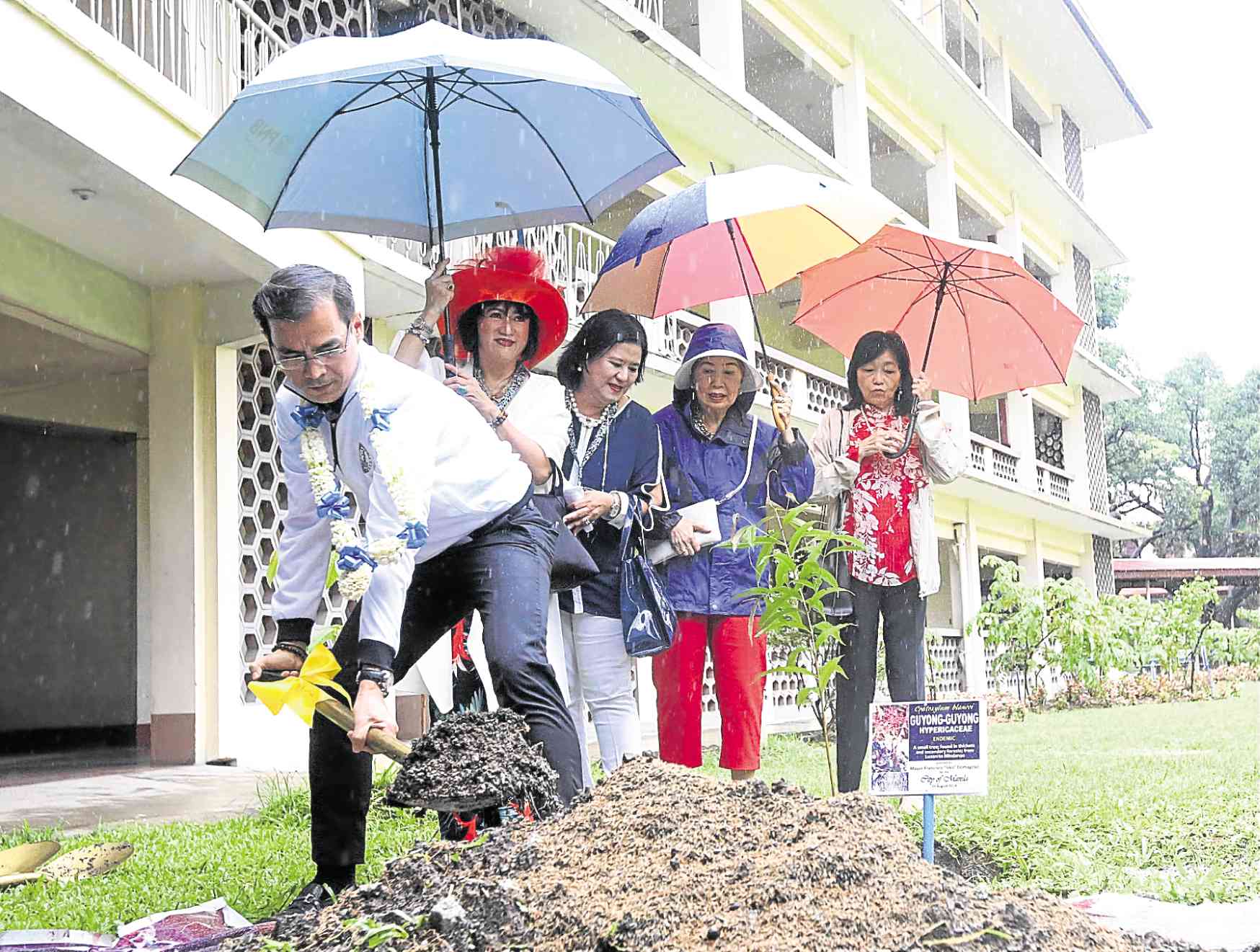 Later during the program, Domagoso remarked that with the threats of climate change and perennial flooding, converting 1,600 hectares of Manila’s land into “green spaces” would be his next goal.

That’s 30 percent of the city’s total land area, a number prescribed by the Department of Environment and Natural Resources, he pointed out, adding that he was thinking of an initiative similar to CHSM’s Laudato Si Garden of Native Trees.

For the 44-year-old mayor who by consensus hit the ground running when he began his term, planting more trees “would be better for the city and for the next generation,” and would be at the core of greening the Philippine capital.

With Manila’s average elevation of 5 meters—which, according to environmentalists, is prone to sinking by some 10 centimeters per year—he expressed the hope that the initiative could help address the perennial flooding of the city’s streets.

“We will continue to pursue [this] direction: to clear streets, open more parks, and reinvigorate and redevelop our remaining 46 parks,” he declared.

He received unequivocal support from CHSM for his “Go Green Project Contra Baha.” 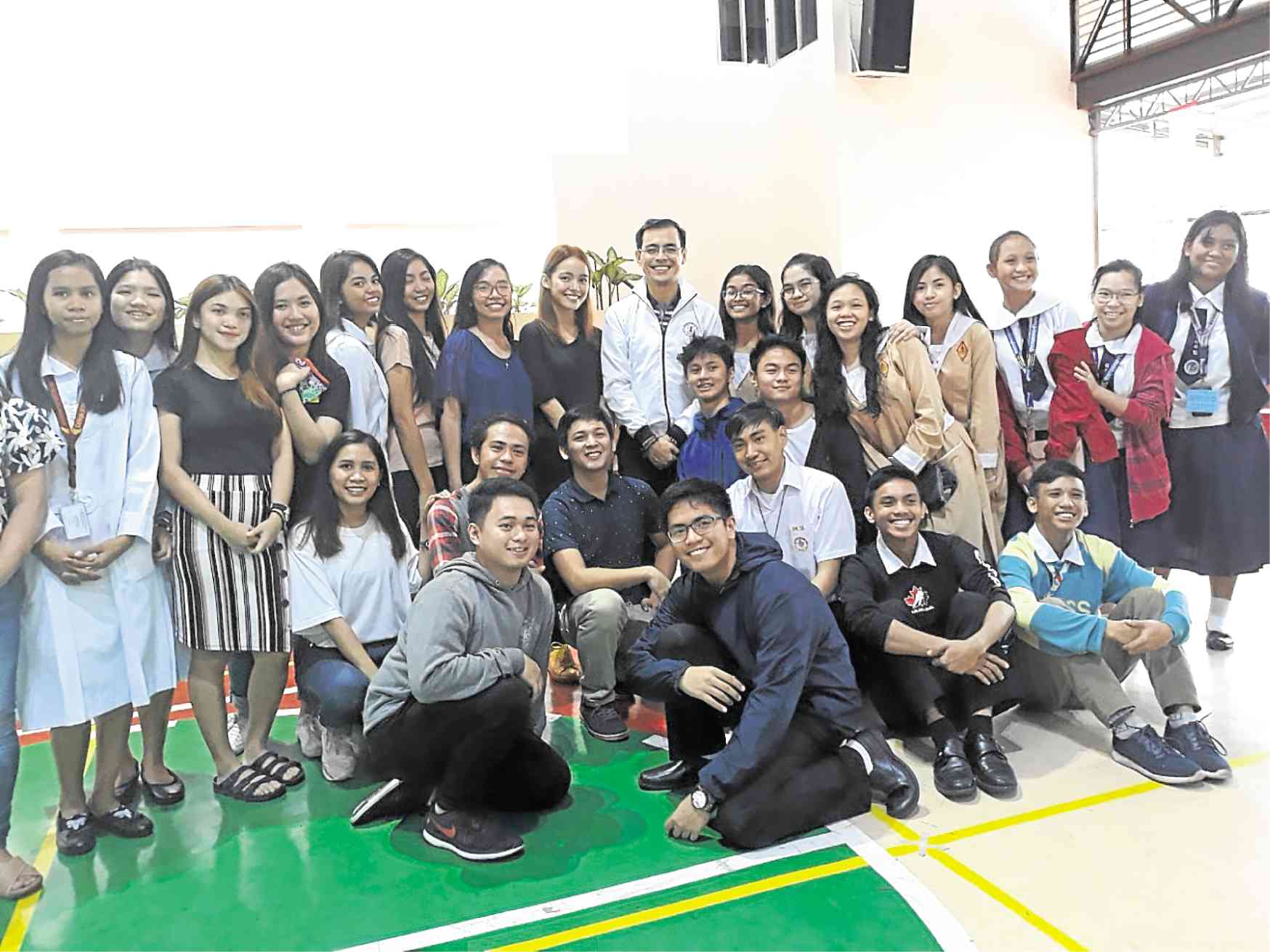 PASSING THE TORCH Part of the morning’s activities was the induction of the Youth Environment Stewards, all students of CHSM. —CONTRIBUTED PHOTO

The intermittent rain notwithstanding, the organizers, the nuns, other alumnae and their guests proceeded with the scheduled activities starting with the mayor’s ceremonial planting of two trees—one in his name and the other on behalf of the City of Manila.

Then the mayor was taken on a tour of the garden, which was developed under the guidance and ministrations of CHSM alumna and renowned landscape architect Dolly Perez. From accounts, he was impressed by what he saw, with Imelda Sarmiento—project leader of the program that produced the volumes Philippine Native Trees 101, 202, and 303, hefty in more ways than one—leading the way and providing running commentary, such as the wisdom of propagating native trees (of which the Philippines has 3,500 species) and planting them according to species or family, and the folly of planting mahogany, which transforms the soil into an acidic state that prevents endangered native trees from growing.

It was in this context that the mayor wondered where Sarmiento and the other women had been all these years.

The garden is dedicated to the memory of the late “teacher of teachers” Dr. Isabel Hizon, and began from seed money donated by Susan Chou Allender of Class 65. According to Rosalou Soriano Lamson, Class 65’s acknowledged moving force and chair of the executive committee (with directors Sarmiento, Vicky Aliño Camarillo, Lillian Santillan Gelvezon and Carina Querubin Latoza, who served as program emcee), it also served as fund-raiser, with class members and other CHSM alumnae sponsoring the trees planted. It was a “three-in-one project,” she said, “benefiting the school, its scholars, and the environment.”

During the program held at the Multipurpose Hall, Domagoso said he planned to redevelop an “old-new park” beside the Office of the Mayor at City Hall, which had been inaccessible to the public and where new trees could be planted by community volunteers.

“There are spaces that we are opening to the public and one of those is our ‘old, new park’—because it used to be a park but it was taken from us by some enterprising individuals who opted to appropriate it in favor of some friends,” he said. “The people of Manila were deprived of that park for six straight years.”

He urged CHSM and other tree-planting advocates to venture further and carry out the initiative in other parts of the city.

“There’s so much space there, so much asphalt, and we’d rather develop it with you and other sensible community members,” he said.

The rest of the morning was spent for the mayor’s induction of the members of YES, or the Youth Environmental Stewards, all students of CHSM, and a flurry of selfies and groufies that he gamely obliged, even taking the phones and doing the honors himself.

There was still time to shoot the breeze with the nuns, CHSM officials and other alumnae, including Gloria Angara, widow of a senator and mother of the incumbent bearing his name, and who, as the young Gloria Manalang, portrayed Greek heroines in school plays.

Of course, a Mass was celebrated to cap the occasion, although the mayor had to leave for other commitments. As he has done in many Class 65 events, the crossover singer Miguel Aguila, son of class member Dee and Noy Aguila, contributed his talent for the morning’s success and sang “The Lord’s Prayer” and the “Panis Angelicum.”

All in all, it was a day full of rain and poetry: “Trees are poems that the earth writes upon the sky” (Kahlil Gibran).

Read Next
Man paralyzed, another sent into coma by puffer fish still in hospital
EDITORS' PICK
Digital hunt for Hyun Bin: 5 challenges for Smartees
Motostrada expands by handing over ‘Trident’ and adding new ‘Horseman’ to its growing business
House panel set to meet for possible decision on ABS-CBN franchise bid
No arrests to be made on 1st day of allowed pillion riding for couples — HPG
Water remains our saving grace right now
WHO: Indoor airborne spread of coronavirus possible
MOST READ
‘I will always speak up for you’: Server on defending Fil-Am family from racist rant
‘Nouveau’: Agot Isidro hits Jinkee Pacquaio’s show of luxury Hermes, Louis Vuitton bikes
Solon withdraws support for ABS-CBN franchise renewal
Ping Lacson: Duterte has no power to say who are terrorists
Don't miss out on the latest news and information.