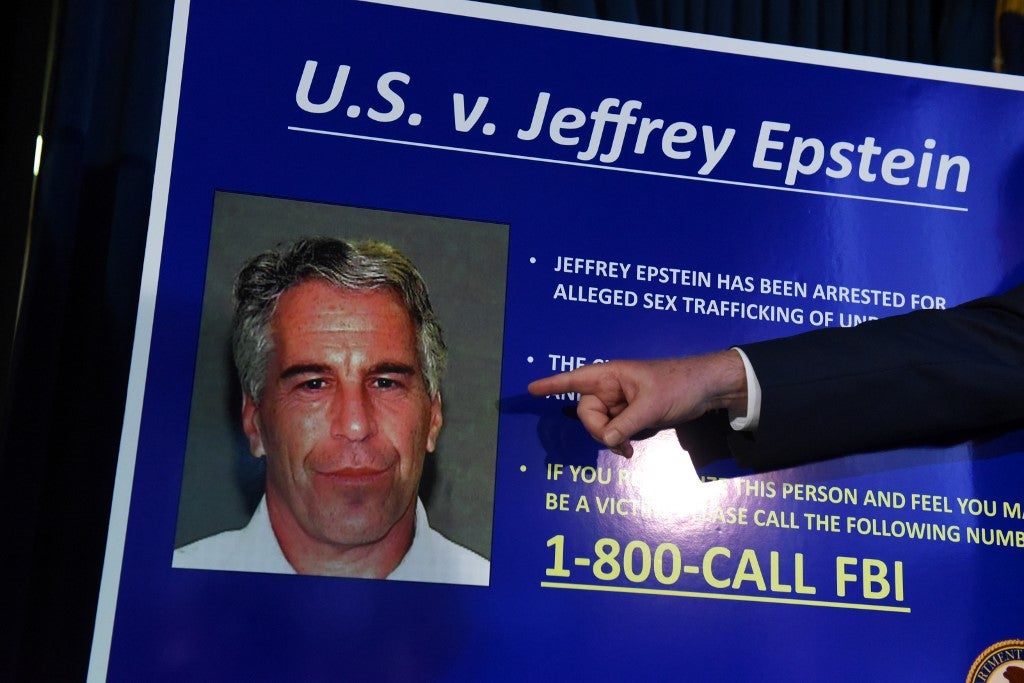 NEW YORK — US financier Jeffrey Epstein, awaiting trial on charges he trafficked underage girls for sex, was found dead in jail Saturday of an apparent suicide, triggering outcry over how the high-profile detainee could die in custody.

The government and FBI immediately launched probes as politicians, law enforcement officials and alleged victims expressed shock that Epstein could take his own life, when a recent reported suicide attempt meant he should have been under close watch.

Epstein, a convicted pedophile who befriended numerous politicians and celebrities over the years, was found unresponsive in his cell around 6:30 am at the Metropolitan Correctional Center in New York from “an apparent suicide,” the US Department of Justice said.

He was pronounced dead at a hospital.

US Attorney General Bill Barr said he was “appalled” and instructed the Justice Department’s inspector general to probe the circumstances.

The FBI is also investigating, the Justice Department said.

The New York Times and other media reported Epstein hanged himself. The city medical examiner’s office did not confirm the cause of death.

On July 23, the 66-year-old was found unconscious with marks on his neck. He was put on suicide watch for six days before being returned to his cell in a high-security part of the jail, the New York Times reported.

His death came one day after a New York court released a tranche of sealed legal documents, providing new details about what prosecutors allege was Epstein’s sex-trafficking operation.

Epstein last appeared in court on July 31 when a judge told him that his trial wouldn’t begin before next June.

Epstein, who denied the charges, had faced up to 45 years in prison — effectively the rest of his life — if convicted.

The Metropolitan Correctional Center, a federal facility in Manhattan that often houses suspects awaiting or during trial, is considered one of the most secure penal establishments in the US.

The two thousand pages of previously sealed court documents released Friday focused on testimony by a woman who claimed she was Epstein’s “sex slave.”

Virginia Giuffre, now an adult, claimed she was forced to have sex with well-known American political and business personalities. They have all denied the allegations.

Prosecutors said Epstein sexually exploited dozens of underage girls, some as young as 14, at his homes in Manhattan and Palm Beach, Florida, between 2002 and 2005.

They claimed that Epstein was “well aware that many of the victims were minors.”

The young women were paid hundreds of dollars in cash to massage him, perform sexual acts and to recruit other girls, prosecutors alleged.

Epstein allegedly had an army of recruiters, often not much older than their targets, who would approach vulnerable teens.

Epstein is also accused of paying off possible co-conspirators to “influence” them, US media have reported.

They have all denied knowing anything about his alleged crimes.

Trump on Saturday retweeted a conspiracy theory alleging, without evidence, that Clinton may be connected with Epstein’s death.

Epstein avoided federal prosecution when facing the charges in Florida a decade ago.

Under a secret plea deal negotiated by former US labor secretary Alex Acosta, at that time a federal prosecutor in Florida, Epstein admitted to a single state charge of soliciting prostitution from a minor and registered as a sex offender.

He served 13 months in a county jail before being released. Acosta resigned last month amid a backlash over the deal.

One of Epstein’s alleged victims said she’ll “never have a sense of closure” because he will never be convicted, according to a message shared by the woman’s attorney, Lisa Bloom.

“You stole from us the huge piece of healing that we needed to move on with our lives,” the woman said.

But Manhattan federal prosecutor Geoffrey Berman said that while Epstein’s apparent suicide was a “yet another hurdle” in delivering justice to his alleged victims, the court case — which included a conspiracy charge — would continue to play out.

‘There’s no turning back:’ Palace says of task force probe on PhilHealth mess