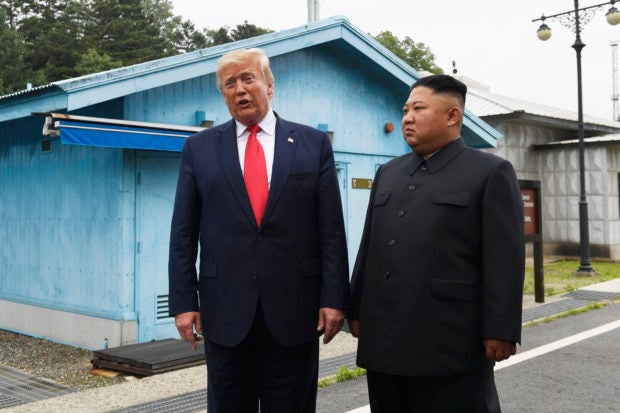 Trump is tweeting more details from the “beautiful” three-page letter he told reporters on Friday that he’d received from Kim. Trump, who is on vacation at his golf club in New Jersey, said Kim spent much of his letter complaining about “the ridiculous and expensive exercises,” which North Korea sees as a threat.

He said Kim offered him “a small apology” for the recent tests and assured him “that this testing would stop when the exercises end.” North Korea on Saturday fired what appeared to be two short-range ballistic missiles into the sea, according to South Korea’s military — the fifth round of launches in less than three weeks.

“I look forward to seeing Kim Jong Un in the not too distant future!” Trump wrote.

The two leaders have met three times — in Singapore, Hanoi and at the Korean Demilitarized Zone — but critics say Trump has received few concessions in the standoff over North Korea’s nuclear weapons program in exchange for the meetings.

At their second summit in Vietnam in February, Trump rejected Kim’s demand for widespread sanctions relief in exchange for dismantling the North’s main nuclear complex, a partial disarmament step.

The U.S. and South Korea have scaled down their major military exercises since Trump and Kim’s first summit in June 2018. But the North insists even the downsized drills violate agreements between Kim and Trump and compel it to “develop, test and deploy the powerful physical means essential for national defense.”

When they last met in June of this year, Trump and Kim agreed to resume working-level nuclear talks that have been stalled since February, but there have been no known meetings between the two sides since then. /gsg

Read Next
Source: Jeffrey Epstein taken off suicide watch before death
EDITORS' PICK
NCR’s COVID-9 alert level may be downgraded from 3 to 2 soon — DOH
What’s at stake for every fighter at ONE: NextGen
FDA reviewing COVID-19 vaccines’ EUA for booster shots
Legarda emphasizes role of ICC/IPs in nation building this IP month
Climate Change Commission and Nestlé PH to discover sustainability-focused solutions
Biden vows to stand with Asia on freedom, hits at China on Taiwan
MOST READ
Drivers now required to take driver’s education upon license renewal – LTO
Gordon to Duterte: You? Teaching me courtesy?
Marcos Jr’s ‘special diploma’ from Oxford: You can have it, too
Can Marcos Jr. be disqualified?
Don't miss out on the latest news and information.