newsinfo / Headlines
Headlines
‘WHILE NOT ALL PATIENTS CAN BE CURED, NO ONE IS BEYOND CARE’ 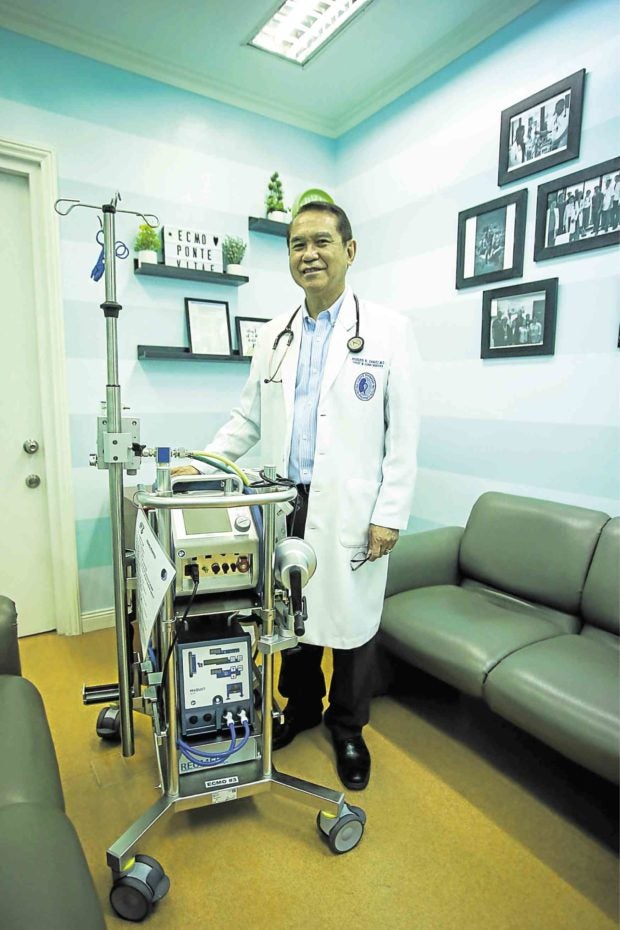 MANILA, Philippines — They do not ford raging floodwaters to save children and the elderly, or search feverishly in the rubble of collapsed buildings for survivors.

Dr. Joselito Chavez and his team of other doctors and nurses are rescuers of a different kind: In the battlefield that is the intensive care unit of the National Kidney and Transplant Institute (NKTI), they assist leptospirosis patients in fighting for life with the help of a special machine.

“When leptospirosis patients develop pulmonary hemorrhage, there is an 85- to 100-percent chance that they will not make it,” said Chavez, a pulmonologist and the NKTI’s deputy executive director for medical services.

So when his first five patients who were highly dependent on the Ecmo (extracorporeal membrane oxygenation) machine survived, he called it a miracle.

An Ecmo machine, which costs P8.5 million each, is a pump that oxygenates the blood, allowing the lungs to recover. It is available in some public and private hospitals in the Philippines, but the NKTI was the first to use it in July 2018 to treat a patient with a severe case of leptospirosis.

“When I was training in Hong Kong two years ago on the use of the Ecmo, I was told that my first patients would die. So as I was treating my first Ecmo patient, I was nervous. I had no hands-on experience, and while the procedure was ongoing, I was studying my notes,” Chavez told the Inquirer.

He has considered it his mission to make use of the Ecmo as a technology that would build a “bridge to life” for patients with leptospirosis, a disease that may become lethal when one develops pulmonary hemorrhage or acute bleeding in the lungs.

Leptospirosis is a bacterial disease that can lead to kidney damage, meningitis, liver failure, respiratory distress and even death when not properly treated. Humans may be infected through direct contact with the urine of an infected animal like a rat, or a urine-contaminated environment.

When floods occur in the rainy season, the number of leptospirosis cases usually soars within two weeks, Chavez said.

Since July 2018, the NKTI has had 10 patients with severe leptospirosis undergo the Ecmo procedure, seven of whom survived.

According to Chavez, patients hooked to the machines in the NKTI are usually discharged after one or two weeks, depending on the severity of the illness.

“Treating our second Ecmo patient, a caregiver, was the most gruelling of all the cases,” Chavez said. “It took [him] more than two and a half weeks to recover because his case was complicated.”

The man who led the team that pioneered the use of the Ecmo machine to treat severe cases of leptospirosis actually wanted to become a lawyer.

“I wanted to argue,” said the Batangas native. “My friends called me pilosopo, and I looked up to lawyers when I was growing up.”

But his father wanted him to become a doctor, and he did as he was told, wearing a mask of slight dissatisfaction as he studied medicine at the University of the Philippines (UP) in Diliman.

But as if to yield to a certain longing for the halls of justice, he ate lunch at the nearby Supreme Court complex. He wanted to be free from medical jargon even for just an hour a day.

It was when he was interacting with patients at the Philippine General Hospital (PGH) during his second year at the UP College of Medicine that Chavez’s compassion came to outweigh his frustration.

“For the clinical part [of my course], we talked to the poor patients at the PGH,” he said. “When I heard their stories, I was touched. It became life-changing.”

And everything seemed to fall into place: Clad now in a white medical blazer with a stethoscope hanging from his neck, he decided that he would save lives.

In speaking with the Inquirer about his medical journey, Chavez did not directly admit devastation at losing a patient.

Yet his voice was heavy with emotion when he said: “While some of us worry about the country we want to go to next, [my patients] ask themselves, ‘Am I going to live?’

“And when they do live, it reinforces a great part of my faith … While not all patients can be cured, no one is beyond care.”

Reggie Saul, a human resources training officer at the NKTI who has worked with Chavez for 12 years, recalled: “There was one week here at the NKTI that he lost three patients. He wept. He was silent, and no one could talk to him.”

Said Malou Chavez, the doctor’s wife of 29 years and a licensed psychologist at Miriam College: “When a miracle happens at work, his excitement becomes contagious … He is attached to all of his patients. He always gives his full presence, full attention, his entire person.”

Olympia Malanyaon, whose friendship with Chavez dates back to 1973 when they entered UP, described him as “even-keeled.” She joked that in all the time they spent together, it was as though he had the same facial expressions.

Yet Chavez became animated when he talked about his leptospirosis patients, such as the construction worker whose wife was pregnant. “When we were able to save him, I only thought about how he would be able to go back to his family and hold his child,” the doctor said.

Malou said it was the trait that her husband wanted their daughter, Ana, to remember as she prepared to become a physician: “He always tells her never to become so detached from her patients, to never limit her work to medication and diagnosis. She must never lose the human side of being a doctor.”

Malou said her husband, who is to receive the 2019 Distinguished Alumni Award in Public Service and Governance from the UP Alumni Association on Aug. 23, never liked to think of his medical practice as a mere job from which he could earn.

Indeed, Chavez does not even like to claim his achievements as his own: “It’s a team effort,” he said.

Chavez does not view the awards and recognition that he has received on his own or on behalf of his team as his “reward.”

“Even if I do not win all these awards, I already earned the only trophy I could ever want a long time ago: that my patients have been able to go back to their families, their jobs. What more could I possibly ask for?” he said.

Chavez, 63, has been working at the NKTI for 32 years. As his retirement from government service looms, the Presidential Lingkod Bayan awardee is hoping that more hospitals in the Philippines would consider using Ecmo machines as an option to cure leptospirosis.

“We can expand our efforts and help other hospitals. We can give hope to patients who once thought they had no chance of living,” he said.

Read Next
FACES OF THE NEWS: Aug. 11, 2019
EDITORS' PICK
World-standard accounting: Unlocking your financial potential
Water remains our saving grace right now
Defend Your Health! Shop health essentials from home with Rose Pharmacy’s Online Sale
COVID-19 wards in 2 more hospitals reach full capacity
Navotas will be on lockdown from July 16 to 29 – Tiangco
Chatting with companions, answering calls on MRT 3 trains banned
MOST READ
‘I am not my father,’ says daughter of lawmaker who voted to deny ABS-CBN franchise
In slap on face of PH, China replies to Locsin on tribunal ruling: It’s invalid
Vilma Santos-Recto ‘prepared’ to face ‘consequences’ over ABS-CBN franchise vote
Did a meme get on Agot Isidro’s nerves? She’s asking ’24 Oras’ to fact-check it
Don't miss out on the latest news and information.