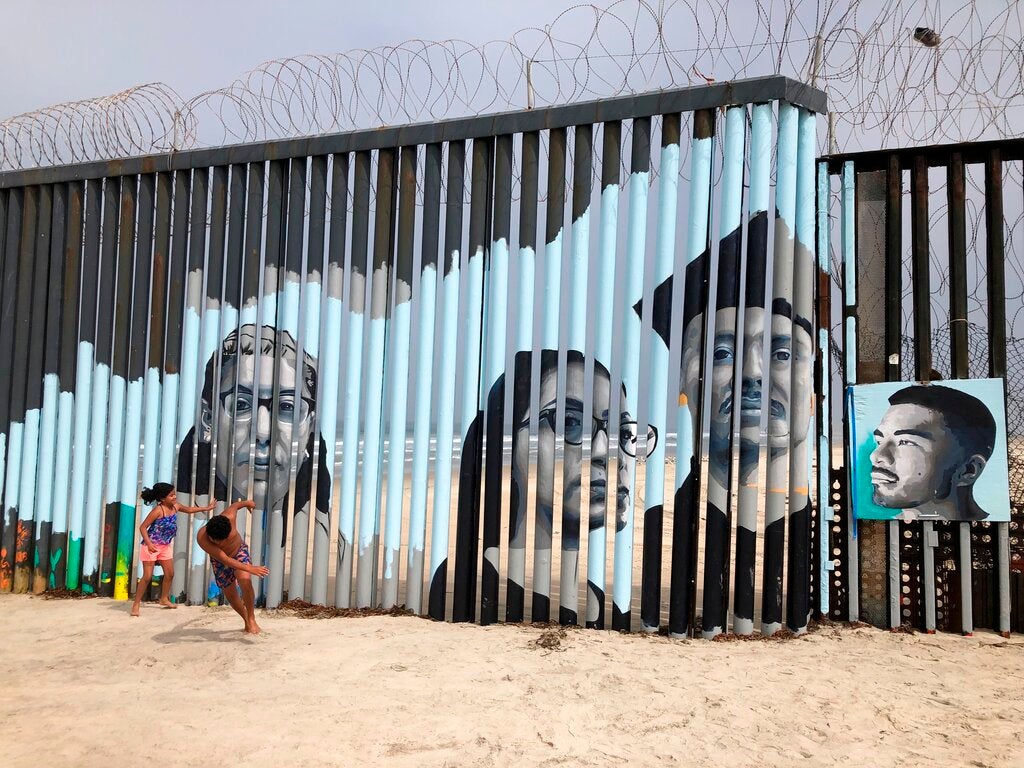 Children play in front of a new mural on the Mexican side of a border wall in Tijuana, Mexico Friday, Aug. 9, 2019. The mural shows faces of people deported from the U.S. with barcodes that activate first-person narratives on visitors’ phones.  (AP)

TIJUANA, Mexico — Lizbeth De La Cruz Santana returned Friday to the Mexican beach where her father entered the U.S. illegally before she was born, this time to put final touches on a mural of adults who came to the U.S. illegally as young children and were deported. Visitors who hold up their phones to the painted faces are taken to a website that voices first-person narratives.

There is a deported U.S. veteran. There are two deported mothers with children who were born in the U.S. There is a man who would have been eligible for an Obama-era program to shield people who came to the U.S. when they were very young from deportation, but was deported less than a year before the Deferred Action for Childhood Arrivals program, known as DACA, took effect in 2012.

The project blends Mexico’s rich history of muralists with what can loosely be called interactive or performance art on the 1,954-mile (3,126-kilometer) U.S.-Mexico border. At the same Tijuana beach during an art festival in 2005, David Smith Jr., known as “The Human Cannonball,” flashed his passport, lowered himself into a barrel and was shot over the wall, landing on a net with U.S. Border Patrol agents nearby. In 2017, professional swimmers crossed the border from the U.S. in the Pacific Ocean and landed on the same beach, where a Mexican official greeted them with stamped passports and schoolchildren cheered.

De La Cruz Santana, 28, conceived the interactive mural as part of a doctoral dissertation at the University of California, Davis, in Spanish with a focus on literature and immigrant experiences. The faces are affixed with barcodes that link to audio on the project website. Her dissertation will include written arguments for DACA-style benefits to anyone who comes to the U.S. as a young child, without any of the disqualifiers like criminal history that former President Barack Obama included.

“Technology is one of the best ways and venues for people to tell their stories,” said De La Cruz, whose parents obtained legal status through former President Ronald Reagan’s amnesty law.

With a $7,500 grant, De La Cruz, who was born and raised in California, directed about 15 people who painted on polyester canvass at a Tijuana art gallery called “House of the Tunnel,” which was once used to smuggle drugs in a secret underground passage to San Diego. She partnered with Mauro Carrera, a longtime friend and a muralist who lives in Fresno, California.

The project is also deeply personal for Carrera, 32, who was born in Mexico, crossed the border illegally as a toddler, and obtained legal status through his father, who had amnesty. He grew up with friends and neighbors in the U.S. illegally.

Carrera said the project aims to “see the people behind the politics.” The deportees painted at least 80% of their own faces under his direction.

“I feel I’m right in the middle of the issue,” he said as others rolled canvases over steel poles that were topped with coiled wire installed after Donald Trump became president.

Last year, many Central Americans in a large caravan of asylum seekers gravitated to the beach, which is downhill from a light tower, bull ring and restaurants. The U.S. side of the beach is usually empty, except for Border Patrol agents parked in their vehicles and occasional hikers.

De La Cruz Santana is struck by the lively atmosphere on the Mexican side and quiet in the U.S.

“If you look past this wall on the U.S. side, there’s nothing,” she said. “I wanted to erase the border.” 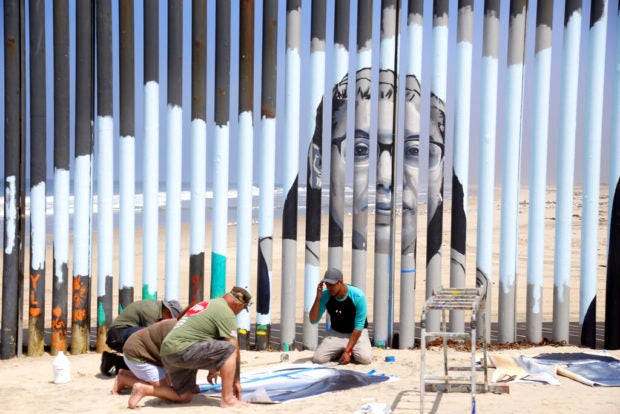 Volunteers help install a new mural on the Mexican side of a border wall that shows faces of people deported from the U.S. Lizbeth De La Cruz Santana conceived the interactive mural in Tijuana as part of doctoral dissertation at the University of California, Davis. (AP)