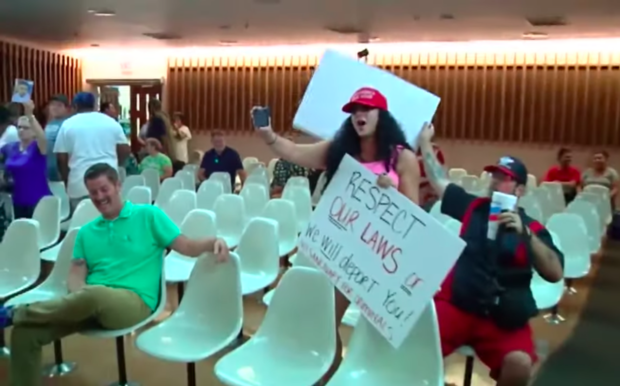 PHOENIX — Alex Kack remained mystified Thursday as to how he became an internet sensation when all he did was laugh at a city council meeting in Arizona.

“Everyone else was doing something far more active than me honestly. I was just laughing,” Kack told The Associated Press. “You could have watched me do the same thing in a movie theater.”

His amused reaction to an anti-immigrant protester at a Tucson City Council meeting Tuesday over a proposed “sanctuary city” law has earned him folk hero status on social media. The video clip from KVOA-TV has been viewed 9.5 million times. With no way to identify him, Twitter posters dubbed him “Green Shirt Guy” because of the lime green polo he was sporting.

Scene inside a Tucson City Council Meeting. Officials voted to put a "Sanctuary City" measure on the November ballot pic.twitter.com/mEh4PNj0Wo

“#GreenShirtGuy” remained the top Twitter trending topic in the U.S. all day Wednesday. Celebrities like model Chrissy Teigen and comedian Patton Oswalt praised “Green Shirt Guy” for literally laughing in the face of his opponents.

The rapid ascent to online fame has been “surreal” for the 28-year-old field organizer.

“There’s no other way to phrase it,” Kack said. “Patton Oswalt said he loved me twice, once as ‘green shirt guy’ and once by my name.”

He also plans to never part with the shirt.

“Once there are too many holes in it, I’ll put it in a frame somewhere.”

Kack works for a campaign to put a “sanctuary city” initiative on Tucson voters’ November ballot. He was sitting near a woman who he said had been making snide comments throughout the meeting. In the video, the woman, wearing a “Make America Great Again” hat, is seen blasting the measure and then being ushered out with another man by a police officer.

A Twitter user listed as Jen of AZ Patriots identified herself as the protester. Messages via social media and email seeking comment from her and AZ Patriots were not immediately returned on Thursday.

AZ Patriots is a conservative group known for counter-protesting at rallies involving immigration. They also are a defendant in an ongoing federal lawsuit filed by the Southern Poverty Law Center for harassing churches that aid immigrant families.

Kack knows it’s unlikely the video would have gone as viral if he had been in a setting that wasn’t politically charged. The meeting occurred just three days after a gunman killed 22 people in El Paso, Texas. Authorities believe the shooter posted an online message expressing hate for Mexicans and immigrants.

“There’s a side to it that’s not funny, especially in light of El Paso,” he said. “But when you’re sitting there and you’re confronted with a level of absurdity and insanity, what else are you gonna do?”

The new-found notoriety has also brought out online trolls. Since Tuesday, the campaign to make Tucson the state’s first “sanctuary city” has gotten more hate emails, Kack said. He personally has also been the subject of some attacks but shrugs it off.

“The first thing I saw when I woke up this morning was someone running a Twitter poll on whether someone should defecate on ‘my smug face.’ I voted yes on the poll of course,” Kack said. “If it’s not hilarious, then you have to deal with how sad and scary it really is.” NVG

Largest US immigration raids in a decade net 680 arrests

Groups sue Trump over deportations without hearing or review