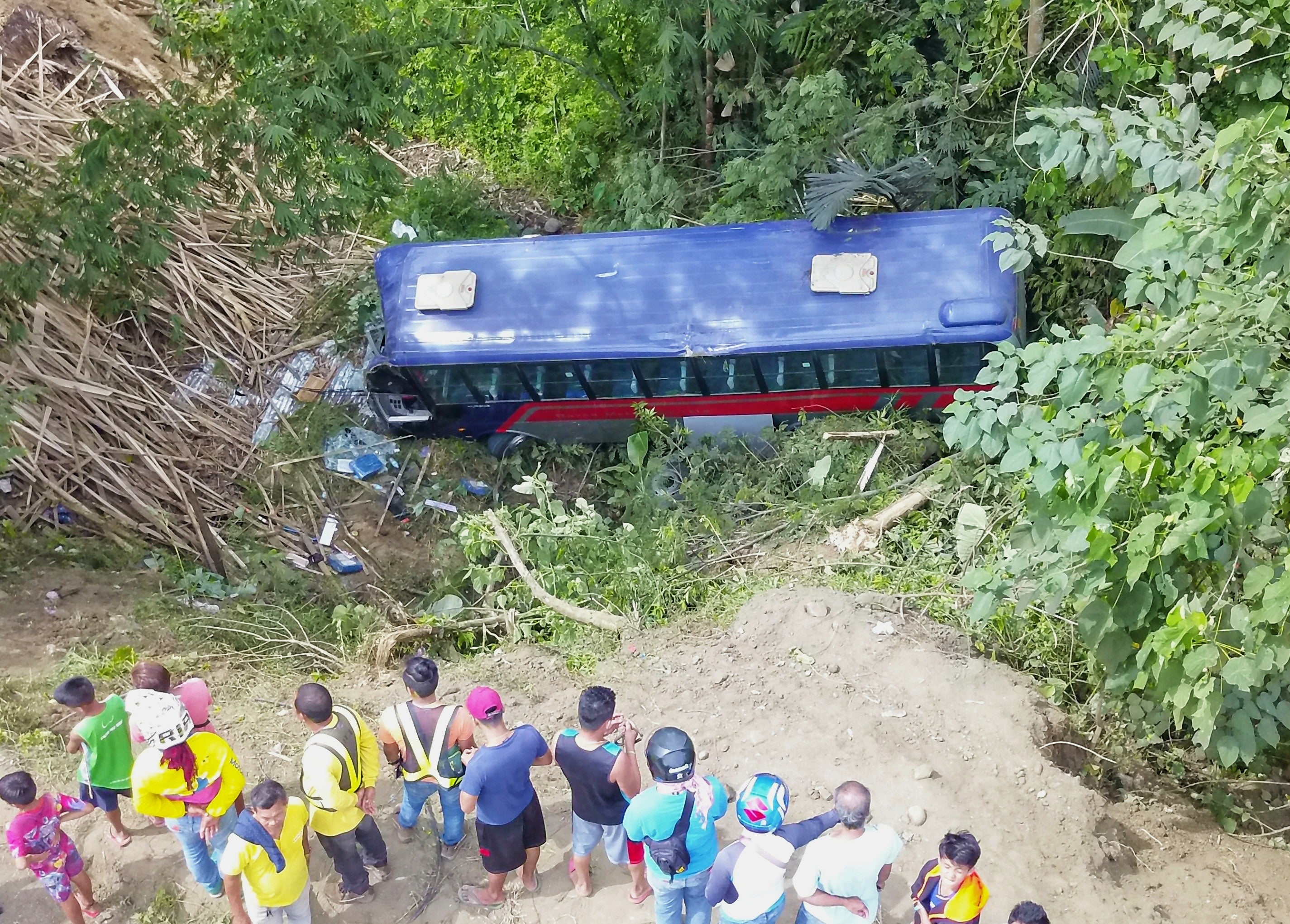 A Metro Shuttle bus traveling from La Paz town of Agusan del Sur to Butuan City plunged to the bottom of a ravine after it lost control along the national highway in Barangay De Oro, Butuan City on Thursday. ERWIN MASCARINAS

BUTUAN CITY –– At least 15 people were rushed to the hospital here when the passenger bus they were riding fell into a 50-meter deep roadside ravine at Purok 3, Barangay de Oro at 12:30 p.m. on Thursday.

Police Senior Master Sergeant Jigger R. Ugalino, traffic investigator at the Butuan City Police Station (BCPS) 4, said 15 of the 30 passengers of the Davao Metro Shuttle bus suffered injuries when the bus fell into the bottom of the ravine.

The bus was on its way to Butuan City from the town of La Paz in Agusan del Sur when the incident happened.

Ugalino said the driver, a certain Merlo Fuentes Cutara, 43, was allegedly talking with women passengers near him when he lost control of the vehicle.

Cutara, a resident of Davao City, reportedly fled the crash scene and did not even bother to help the passengers get out of the bus, police said.

“He was driving fast,” said Angel Catmoy, 72, one of the survivors of the incident, referring to the driver.

“Some of the passengers in front even asked him to slow down. I dozed off but only for a short while as the passengers were screaming when the bus slammed and fell on the side of the road,” he said.

Arnel Maboloc, a carpenter working in a furniture shop along the roadside where the bus crashed, said the bus did not immediately fall to the bottom.

“We were working here when all of a sudden we heard a loud explosion,” Maboloc said.

“It was the bus hitting the pile of soil on the side of the road. (The impact) was so strong that the bus just went through it and then slowly fell into the bottom of the ravine. We froze for a few minutes before we could even move to help the passengers,” he added.

The Land Transportation Franchising and Regulatory Board in Caraga has ordered the management of the Davao Metro Shuttle to submit a report of the incident, complete with the Global Positioning System reading of the particular unit and the dashboard camera recording of the incident as it started the investigation.

Police said the recent crash was the second incident that happened in the area involving the bus firm. On July 16 last year, 25 people were injured when a Davao Metro Shuttle bus spun and turned on its side in Barangay Ampayon, only five kilometers away from the recent crash site. /lzb