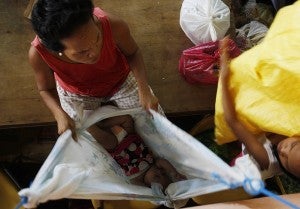 A mother, affected by Friday's flash flooding brought about by Tropical storm Sendong (Washi), puts her baby to sleep at an evacuation center Wednesday, Dec. 21, 2011, in Iligan city. The tropical storm swept through the coastal region Friday night and unleashed flash floods in the middle of the night that caught most of the victims in their sleep. AP PHOTO/BULLIT MARQUEZ

CAGAYAN DE ORO, Philippines—Survivors of devastating Philippines flash floods face a growing threat of disease including cholera and typhoid, officials warned Wednesday as the death toll rose above a thousand.

Some 44,000 people who fled as huge torrents swept away shantytowns in the nation’s south are packed in evacuation camps without proper sanitation, and officials fear the sites are potential breeding grounds for epidemics.

The storm struck the main southern island of Mindanao over the weekend, bringing heavy rains, flash floods and overflowing rivers that swept whole coastal villages away.

Civil defense chief Benito Ramos put the death toll at 1,002 and warned it could climb further as victims swept out to sea began washing ashore, with some cadavers turning up nearly a hundred kilometers (62 miles) away.

“They are washing up on the beaches,” he told AFP. “I expect that (the toll) will go up because there are still many missing,” he said, adding that the numbers were becoming too large to accurately tally.

“We stopped counting the missing. We lost count already.”

The crisis has so far centered on how to deal with hundreds of decaying corpses and their overpowering stench, but officials said Wednesday that attention should now focus on protecting the living.

Assistant Health Secretary Eric Tayag warned the crowded conditions could lead to outbreaks of leptospirosis, diarrhoea, cholera, hepatitis A, typhoid fever and dysentery, with children and pregnant women the most vulnerable.

“We may be paying so much attention to the corpses we will ignore the evacuation centers,” he said in a television interview.

“If there is any epidemic or threat to health, it will come from the evacuation centers.”

The hardest-hit areas were the port cities of Cagayan de Oro and Iligan where crowded slums built on sandbars near the mouths of major rivers were washed away in the dead of night.

Officials in the two cities said there have been no epidemics so far at the evacuation centers – mainly schools and gymnasiums – but conditions remain chaotic due to the shortage of skilled relief workers to run them.

Dante Pajo, a member of the Cagayan de Oro city council, said there was not enough food or water for the city’s 26,000-plus evacuees.

At a Cagayan de Oro gymnasium, 52-year-old grandmother Adela Campaner lined up at mid-morning for bowls of porridge – the first meal of the day for herself and her two grandchildren.

“I am ashamed that I have to beg for food,” she said, vowing to return to their devastated riverside shantytown as soon as possible and resume her roadside restaurant business.

Wearing donated, mismatched T-shirt and pants, she said she had not taken a bath for three days and was forced to retreat from the school’s toilet earlier in the day due to the repulsive smell.

The gym was packed beyond capacity with people sleeping on mats and cardboard cartons that filled every available space.

Some 276,000 people are receiving emergency assistance, including many who have shunned the evacuation centers and are sheltering with relatives – unable to return home as the government has forbidden them from returning to flood-prone areas.

“They have no houses, nothing to go home to. The clothes on their backs are all they have,” Ramos said.

“It will take months (to resettle them) because we will have to construct temporary shelters for them. We are still looking for a space that will be safe for all of them,” he said.

The government has said survivors will not be permitted to go back to flood-prone areas.

As mortuaries overflowed, authorities in the two badly hit cities had announced plans for burials in mass graves but after intense criticism they hastily arranged individual tombs.

Iligan on Tuesday began burials of dozens of identified victims, while Cagayan de Oro is preparing a swimming pool-size communal tomb at the local cemetery.