Modi’s vision of a Hindu India advanced by Kashmir changes 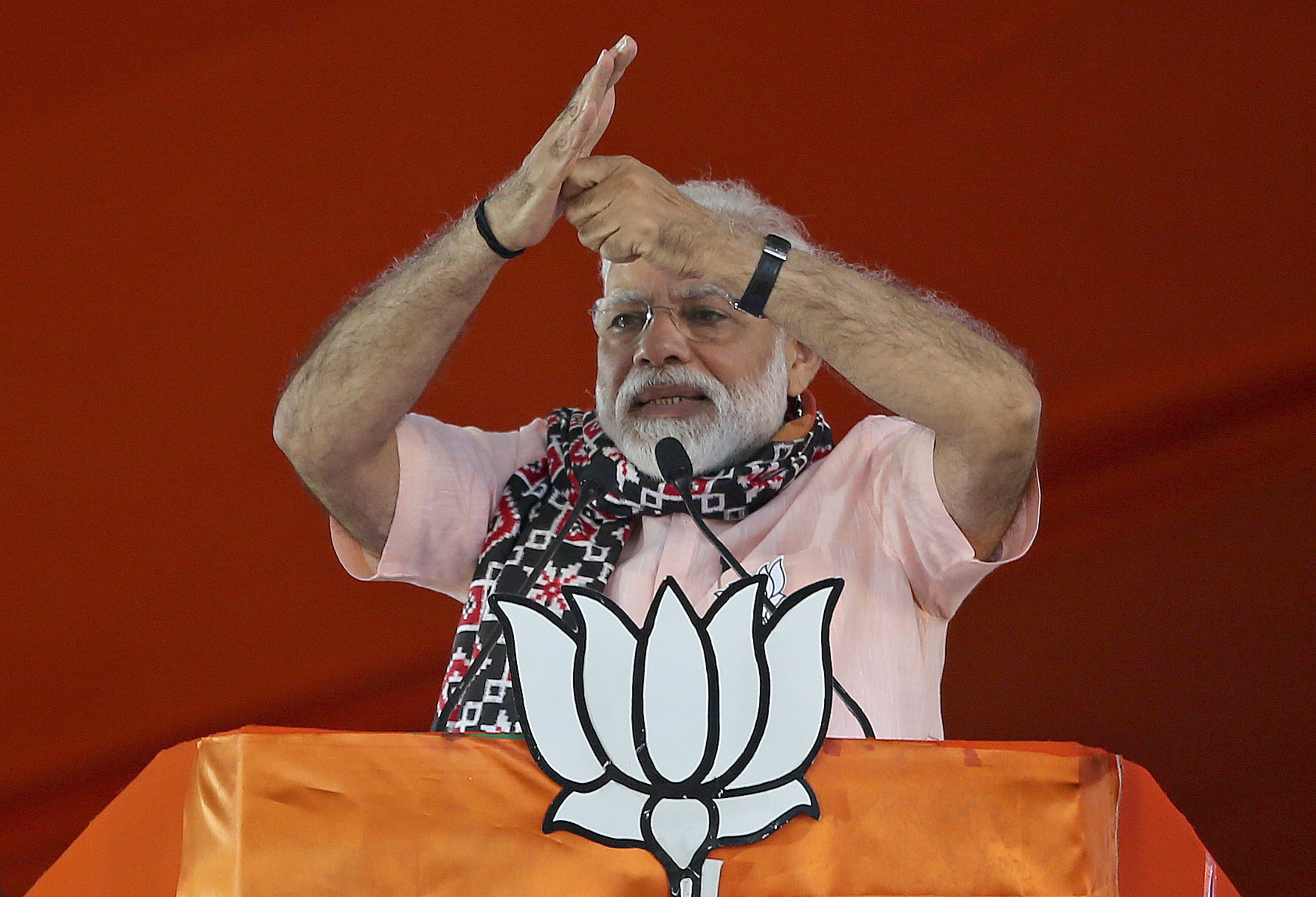 FILE – In this April 1, 2019, file photo, Indian Prime Minister Narendra Modi gestures as he speaks during an election campaign rally of his Bharatiya Janata Party (BJP) in Hyderabad, India. Modi’s vision of a Hindu India took a leap forward with his government’s decision in August to subsume Kashmir into the federal government by eliminating its special status and allowing anyone to buy property and move into the state, raising fears among residents that they will lose their distinct identity. Modi’s home minister, Amit Shah, considered the architect of the Hindu nationalist-led government’s aggressive agenda to convert India from a secular, multicultural democracy into a distinctly Hindu, culturally and politically homogenous state, sold the new policy on Kashmir to parliament by equating it with Pakistan, India’s staunch foe. (AP Photo/Mahesh Kumar A., File)

NEW DELHI — Prime Minister Narendra Modi’s vision of a Hindu India has leaped forward with his government’s decision to subsume Muslim-majority Kashmir into the federal government by eliminating its special status and allowing anyone to buy property and move into the state, raising fears among residents that they will lose their distinct identity.

He did so by pushing his agenda through a Parliament that has no united opposition, presenting him with no obstacles and suggesting that his entire Hindu nationalist agenda will enjoy a smooth passage.

This situation favoring Modi is likely to intensify next year when one third of the seats in the upper house of Parliament, where his Hindu nationalist Bharatiya Janata Party doesn’t hold a majority, are up for grabs. Most of the new members are expected to come from the BJP or its allies.

“The opposition is demoralized and hasn’t got the will to put up a fight. There is no leader in Parliament to create a united opposition. The BJP is taking advantage of that. Once it has total control of Parliament next year, it will face no obstacles at all to its Hindu nationalist goals,” said political analyst Arati Jerath.

Even the Congress party, which ruled India for nearly half a century after independence from Britain in 1947, is rudderless and disjointed.

Former Congress party leader Rahul Gandhi, who resigned as party chief after losing to Modi in May elections, criticized the “abuse of executive power” by the ruling party and said the move would have grave implications for national security.

But such is the drift in the party that several Congress lawmakers tweeted their support for the BJP’s maneuver on Kashmir, flouting the party line. Members of both Congress and other parties are deserting them for the BJP.

Analysts say the opposition has been spooked by Modi’s spectacular victory in the May general election, when he won a gigantic mandate. The smaller parties, they say, have become timid and reluctant to oppose the BJP.

Modi’s home minister, Amit Shah, who is considered the architect of the government’s aggressive agenda to convert India from a secular, multicultural democracy into a distinctly Hindu, culturally and politically homogenous state, sold the new policy on Muslim-majority Kashmir to Parliament by equating it with Pakistan, India’s staunch foe.

“They don’t want to be seen on the wrong side of public sentiment, which is nationalistic at the moment. In my neighborhood, people were celebrating on the street on Monday over Jammu and Kashmir. The buildup of nationalist sentiment over the past five years peaked in the general election and the opposition is nervous about opposing it,” Jerath said.

In a nationally broadcast speech Thursday evening, Modi said Kashmir’s special status was being used by Pakistan to incite anti-India sentiment in the Jammu and Kashmir region.

“I have complete faith, under this new system we all will be able to free Jammu and Kashmir of terrorism and separatism,” he said.

The BJP’s changes in Kashmir, without any prior debate or consultation, sailed through Parliament, suggesting Modi and Shah will be able to roll out other controversial measures promised in their party’s election manifesto, including creating a national register of citizens that critics say will make it easier for the government to deport Muslims of Bangladeshi descent, and to build a Hindu temple on a site where a 500-year-old mosque was torn down by Hindu hardliners.

The Hindustan Times, one of India’s largest daily newspapers, carried an editorial on Wednesday with the headline “The Abdication of the Opposition.”

“The opposition parties failed to put up a democratic fight even in a chamber where they collectively outnumber the BJP,” it said.

Even regional parties from south India who have long resisted tinkering from New Delhi supported the BJP bid to consolidate federal control in Kashmir. The state of Jammu and Kashmir was downgraded into two territories which will have limited decision-making power and no longer be permitted to have their own constitution and flag.

The parties’ reasons for voting to strip Kashmir of its special status varied. Vijay Sai Reddy, a member of Parliament for the YSR Congress party from the state of Andhra Pradesh, explained his vote for the measure by asking “How one country can have two constitutions? We can’t support that,” he said.

Ravindra Kumar, a Telegu Desam Party MP from the same state, said that Kashmir having its own constitution and flag gave it “special powers that are discriminatory.”

“Our party believes that all the people in the country should have equal rights,” Kumar said.

Apart from fear of bucking the mood of nationalism sweeping some parts of India, another reason for so few opposition parties putting up any resistance is the fear of antagonizing a strong federal government in New Delhi, and losing out on money for their states, said Mihir Sharma, a senior fellow at the New Delhi-based Observer Research Foundation.

Read Next
No phone calls, no groceries: Kashmir on edge under lockdown
EDITORS' PICK
‘NCR Plus’ to be under MECQ starting April 12 until April 30 — Palace
Pru Life UK receives four golden arrows for solid corporate governance
Pre-order the new vivo Y20s [G] to get a free TWS earphone
Malls adjust ‘NCR Plus’ operating hours for April 12-30 MECQ
Speed up your game with the new vivo Y20s [G]
Metro Manila to have shortened curfew hours from 8 p.m. to 5 a.m. under MECQ
MOST READ
Stop ‘creeping occupation’ of ‘militia’ boats in WPS, Pacquiao asks China
Bea Alonzo clarifies status of her relationship with Dominic Roque
Convicted former aide of Sen. Bong Revilla dies — BuCor
Locsin to China: ‘Then move out’
Don't miss out on the latest news and information.