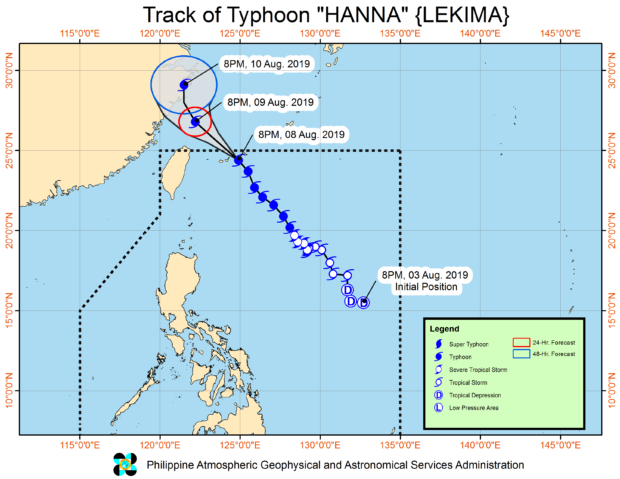 MANILA, Philippines – Typhoon Hanna (Lekima) has moved just outside of the Philippine area of responsibility (PAR) as of 12:30 a.m. on Friday, according to the Philippine Atmospheric Geophysical Astronomical Services Administration (Pagasa).

However, the state weather bureau noted that Hanna’s tail is still affecting local weather, as it continues to enhance the southwest monsoon or Habagat.

This will bring rains to different parts of Luzon including Metro Manila until the weekend, especially as Hannah slightly intensified, now packing maximum sustained winds of 195 kilometers per hour (kph) and gustiness of up to 240 kph.

Light to moderate rains with intermittent heavy monsoon rains may be experienced in Metro Manila, Western Visayas, Calabarzon, and the rest of Central Luzon and Mimaropa.

Because of Hanna’s exit, all storm signals have been removed, although a Tropical Cyclone Wind Signal no. 1 has been raised in Batanes. Gale warnings are still active in most parts of the country, including both the western and eastern seaboards.

The low-pressure area spotted earlier on the western side of the country has eventually dissipated. Meanwhile, Typhoon Krosa, another weather disturbance that Pagasa is monitoring, remains outside the PAR, with its eye last spotted 1,950 kilometers east of extreme Northern Luzon.

Krosa, which remains stationary at the outskirts of the Philippine sea, has registered maximum sustained winds of 155 kph and gustiness of up to 190 kph. However, the typhoon is not seen to enter PAR and directly affect weather systems.