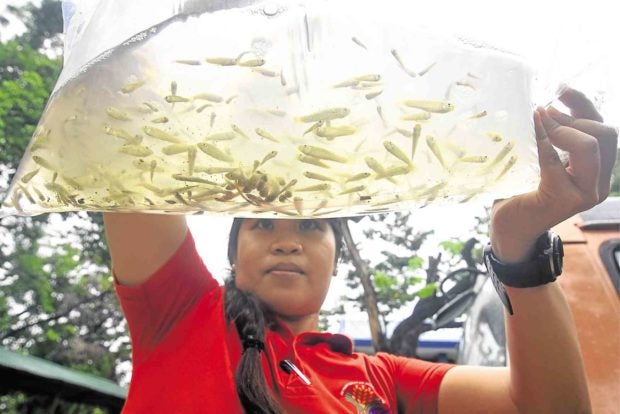 VORACIOUS LARVAE EATERS About 100 “tuyong,” introduced by the Americans to fight malaria in the 1920s, are ready for release to hunt and devour dengue-carrying mosquito larvae in the canals and waterways of Dagupan City on Thursday. —WILLIE LOMIBAO

Local governments aided by state agencies are waging a biological and chemical warfare of sorts to stop the fast-rising number of dengue cases and deaths caused by the mosquito-borne viral disease.

On Thursday, the Bureau of Fisheries and Aquatic Resources (BFAR) deployed pinky-sized scaly commandos to hunt and devour mosquito larvae in waterways near schools in Dagupan City and in the towns of San Fabian, Sta. Barbara and Mangaldan, all in Pangasinan province.

In Central Visayas, the Department of Health (DOH) regional office said it was speeding up the installation of insecticide-treated net curtains, which could kill mosquitoes on contact. Around 50 percent of all schools in the region are already covered.

The measures are on top of the Department of Health’s campaign dubbed “Sabayang 4 o’clock habit para Deng-Get Out” to manually search and destroy mosquito breeding sites in homes, workplaces and schools.

A team from the BFAR research center and volunteers from the Lions Club Dagupan on Thursday distributed 30 bags containing at least 100 mosquitofish each, mostly to schools, following a request from the Department of Education.

The BFAR will breed more of the fish, which had been collected from canals and ponds, as they are now being used for the biological control of mosquitoes, Rosario said.

Tuyong are edible but not a preferred fare, he said as he dispelled concerns that they might become invasive as they die out during the dry season when water disappears from canals and ponds.

The fish (Gambusia affinis), was brought into the country by the Americans in the 1920s to stop the spread of malaria, another mosquito-borne disease.

According to Rosario, stocking tuyong in canals could have helped reduce the number of dengue cases in Dagupan, which fell from 175 cases from January to Aug. 5 in 2018 to 108 in the same period this year, according to the city health office.

In the Cordillera region, hospitals had treated 4,327 patients from January to Aug. 3, with nine deaths, according to Amelita Pangilinan, DOH regional director.

In Cebu City, Jaime Bernadas, DOH director for Central Visayas, said the meshed curtains installed in schools were designed for doors and windows. Mosquitoes attack or feed from 6 a.m. to 9 a.m. and from 3 p.m. to 6 p.m., at times when thousands of children congregate in one location, he said.

Bernadas said the mosquito killers were safe to humans and could remain potent for up to five years if kept dry.

Health Secretary Francisco Duque III on Wednesday visited the dengue-hit province of Quezon where authorities reported 12 people dead in the first seven months of the year.

The provincial public information office listed 3,623 cases from January to Aug. 12, a 19.23-percent increase from the number for the same period last year.

Localities posting high cases of dengue included the cities of Lucena and Tayabas, and the towns of Unisan, Lopez, Atimonan, Mauban, Gumaca, Infanta and Sariaya.

On Thursday, Duque traveled to Tacloban City in Eastern Visayas, where the provincial governments of Leyte, Samar and Eastern Samar and the cities of Ormoc and Tacloban had declared state of calamities due to dengue.

The region recorded 10,569 cases with 36 deaths, ranking Eastern Visayas 10th among the country’s regions with a high number of dengue cases. —WITH REPORTS FROM VINCENT CABREZA AND JOEY A. GABIETA