DA’s Dar hailed for bringing science to the streets 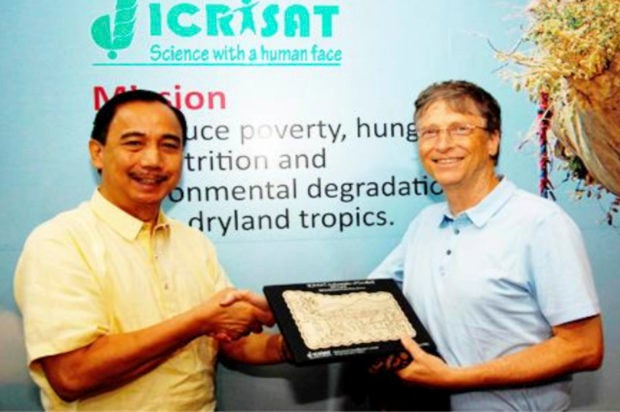 WHEN GREAT MINDS MEET Dar hands a plaque to Bill Gates during the latter’s visit to Icrisat in India.

Newly appointed Agriculture Secretary William Dollente Dar is not new to his post, having held it during the short-lived Estrada administration.

He has been widely recognized for his work and has won many awards, including five King Baudouin awards during his 15-year stint (1999-2014) as director general of the India-based International Crops Research Institute for Semi-Arid Tropics (Icrisat). On a visit to the organization, Bill Gates acknowledged the potential of Icrisat’s works on legumes and dry land cereals to help combat hunger in millions of households.

With Dar’s retirement on Dec. 29, 2014, the science community of Icrisat said in jest: “We have cloned him and hope to produce another Dr. Dar—

his brains, his scientific brilliance, his humility, compassion, patience, and so on.”

Dar, 66, always saw to it that research findings would not remain in the lab but would be used to benefit everyone.

According to his vision, legumes, considered nature’s answer to world hunger, were genetically transformed to be disease- and drought-resistant; bigger, but needing less water, less fertilizer and less space.

Dar took science to the streets to make it available to ordinary folk. That meant teaching farmers how to plant, grow and market their crops, and get rich. He also provided the means by urging the private sector to invest in agriculture, telling them that they would profit not only through financial gain but also by saving the world from hunger.

Dar has written a number of books, notably “Feeding the Forgotten Poor,” which was launched in India in 2012. The following year, he was conferred the Swaminathan Award for leadership in agriculture, named after the “Father of India’s Green Revolution.”

Aside from Dar’s international affiliations that included the UN Millennium Task Force on Hunger, he was given the Pamana Presidential Award for Filipino Individuals and Organizations Overseas in 2014, and was honored by the Philippine Congress for his transformational leadership in Icrisat and the Philippines.

Back home, Dar wasted no time in organizing Inang Lupa, a farming movement “championing and advocating modernized and industrialized Philippine agriculture guided by an inclusive, science-based and market-oriented development strategy.”

Mahatma Gandhi listed “science without humanity” as one of the seven capital sins. Dar expounded on that idea and called it “science with a human face.”