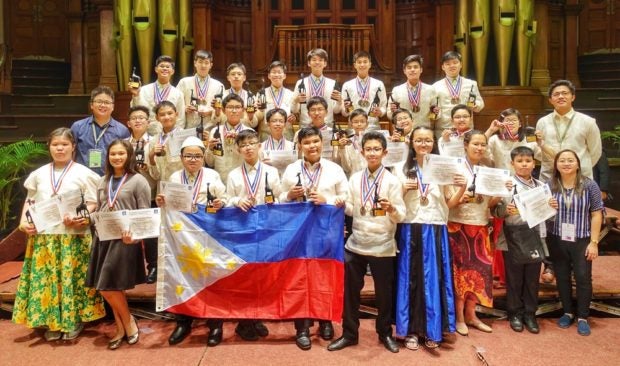 The Philippine team with their medals and trophies at the 2019 South Africa International Mathematics Competition (SAIMC) awarding ceremony held at the Durban City Hall in South Africa. Photo by MTG

MANILA, Philippines — Filipino math wizards once again displayed their skills in numbers abroad when they successfully bagged 35 awards from a competition in South Africa.

The 26-member Philippine team, composed of elementary and high school students, won one gold, five silver and 15 bronze medals, as well as five merit awards in the individual competitions at the 2019 South Africa International Mathematics Competition (SAIMC), the Mathematics Trainers Guild-Philippines (MTG) said in a statement.

Filbert Ephraim Wu, who hailed from Taguig City and student of the Victory Christian International School is the sole gold medalist from the Philippine team.

“The contest is known as one of the most challenging high school math competitions. I knew that it was beyond my current math skills. MTG’s trust and my brother’s support convinced me to take the challenge. I never really expected to win or even just aim for a gold medal in this competition. I am beyond grateful for this unexpected sole gold medal award that I won for the Philippines,” Wu said.

The contest was held from August 1 to 7 in Durban City, with the team arriving at the Ninoy Aquino International Airport (NAIA) on Wednesday night.