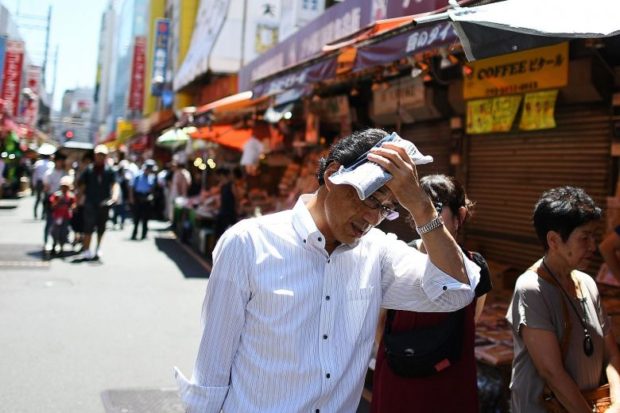 Japan has been suffering from high temperatures this summer, leading to concerns about how athletes will cope with the heat during next year’s Olympics in Tokyo. Yesterday, the temperature rose above 35 deg C in the cities, including Fukushima, Tokyo, Kyoto and Osaka. AGENCE FRANCE-PRESSE

TOKYO — A strong typhoon lashed south-western Kyushu on Tuesday and another two might yet hit Japan by this weekend, bringing more weather misery as the country sweats through a relentless heatwave.

The authorities have issued heat advisories for many areas.

The Fire and Disaster Management Agency (FDMA) said 57 people had died and another 18,290 were taken to hospital for heat-related causes in the week ending the past Sunday. This is triple the number of people who had suffered heat exhaustion a week ago, of whom 11 died.

The weekly toll was also the second highest since the FDMA began keeping tallies in 2008.

Slightly more than half the victims last week were senior citizens aged 65 and above and 41 per cent of cases had occurred in poorly ventilated homes with no air-conditioning.

As the country baked under the relentless heat, Typhoon Francisco – the eighth typhoon of the season and the second to make landfall in Japan this year – killed one person and injured several others in Kyushu, triggering evacuation advisories for 20,000 people.

Typhoon Lekima is expected to hit south-western Okinawa tomorrow, while Tropical Storm Krosa is predicted to bring rain to Tokyo this weekend.

Japan has been suffering from high temperatures this summer, leading to concerns about how athletes will cope with the heat during next year’s Olympics in Tokyo.

The mercury has climbed as high as 38 deg C since last week due to a lingering high-pressure system. Yesterday, the temperature rose above 35 deg C in the cities, including Fukushima, Tokyo, Kyoto and Osaka.

A 28-year-old man died in Yatomi city near Nagoya on Tuesday as he was sunbathing in his backyard, media reports said.

Nine passengers were also taken to hospital for heat-related causes after a blackout not only suspended train services in Tokyo on Tuesday morning, but also knocked out the air-conditioning system.

Last week, 11-month-old Kokomi Nobata died in central Toyama City after her mother Suzu Nobata, 25, left her strapped in a child seat in the back of a car.

Mrs Nobata, who has been arrested, told police she used a proxy driving service after a night out drinking, without realizing until 9.30am that she had left her daughter in her car.

Statistics from the Tokyo Metropolitan Police yesterday showed at least 39 people have died of heat-related causes in the capital in the first six days of this month.

As the hot weather persists, the weatherman is urging people to stay properly hydrated, to block direct sunlight using curtains and to use parasols or wear hats when outdoors. It has also called on the public to set cooler air-conditioning temperatures and ensure good air ventilation.

The Mainichi, in an editorial on Monday, said 1,518 people died during last year’s brutal summer between June and September, a figure that is “comparable to that of a major disaster”.

The Mainichi said: “Heatstroke occurs when the body’s ability to adjust its temperature stops functioning properly as a result of the heat.

“Hearing of ‘record’ high temperatures is now common, and that trend probably won’t change (due to global warming). It is important for each person to adopt preventive measures as part of their lifestyle.”