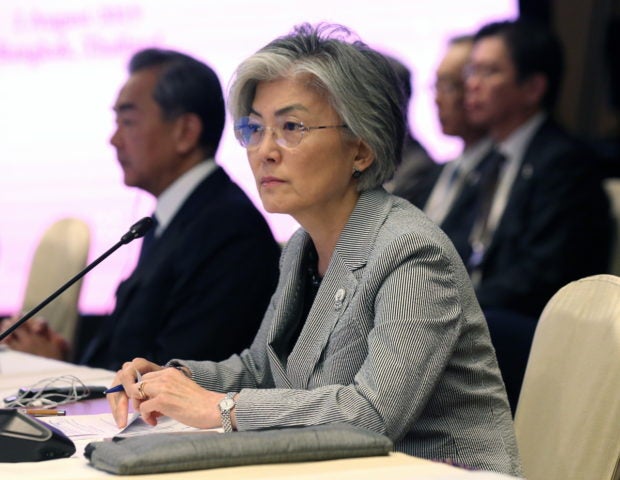 SEOUL — Discussions are underway for a foreign ministers’ meeting later this month in Beijing, where South Korea, China and Japan can discuss issues concerning Northeast Asia ahead of a trilateral summit expected to take place before the end of the year.

“The three countries are in talks (for) a foreign ministers’ meeting,” Seoul’s Foreign Ministry said Wednesday, adding that details, including the date of the meeting, have not been confirmed.

Earlier in the day, Japanese broadcaster NHK reported that Korean Foreign Minister Kang Kyung-wha will hold talks with her Chinese and Japanese counterparts, Wang Yi and Taro Kono, in Beijing on Aug. 21.

It also said Kang and Kono will hold a bilateral meeting to discuss the escalating trade rift and the issue of wartime forced labor, on the occasion of the three-way talks. The Korean Foreign Ministry said nothing has been confirmed regarding the bilateral dialogue.

During the South Korea-China meeting, the two ministers are likely to discuss Chinese President Xi Jinping’s possible visit to Seoul. They may touch on the possible deployment of US intermediate-range missiles on South Korean soil, though Seoul’s Defense Ministry said Monday there has been no discussion of the matter between Washington and Seoul.

US Secretary of Defense Mark Esper on Wednesday said he was not asking Asian allies of the US to deploy US missiles.

The three ministers’ key agenda items reportedly will consist of the series of missile launches by North Korea in recent weeks and how to achieve the denuclearization of the Korean Peninsula.

On Tuesday, North Korea fired two projectiles believed to be short-range ballistic missiles into the East Sea, the fourth such launch in less than two weeks. The North has stated that it fired the missiles to protest a South Korea-US joint military drill that began this week.

Relations between Seoul and Tokyo have further deteriorated this year as simmering disputes over Japan’s wartime use of Korean slave labor reignited.

In an apparent act of retaliation against 2018 Korean Supreme Court rulings in favor of victims of forced labor, Japan slapped export restrictions on materials critical to the South Korean economy.

On Aug. 1, Kang and Kono met in Thailand to attempt to resolve the diplomatic and economic quarrels, but the two only confirmed their considerable gap in views and ways of handling the situation.

On Wednesday, the Foreign Ministry urged Tokyo to rescind its decision to exclude Seoul from a list of trusted trading partners.