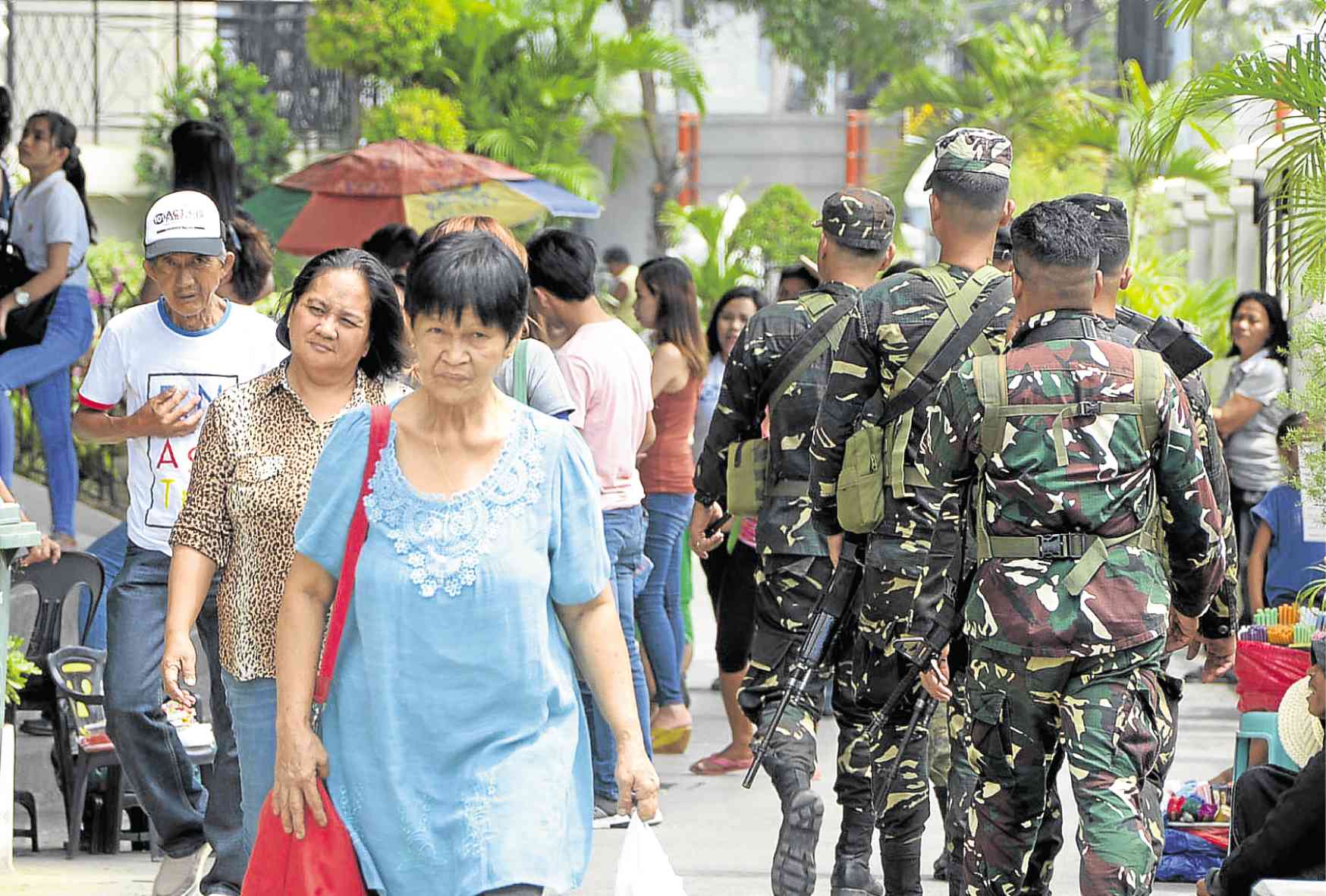 SOLDIERS IN DAVAO’S MIDST Soldiers patrol the premises of San Pedro Cathedral as residents of Davao City go about their daily routines amid the declaration of martial law in Mindanao. —BING GONZALES

The move came days after Mayor Sara Duterte, the President’s daughter, broached the idea during an interview by Pastor Apollo Quiboloy last week.

Duterte noted the negative impact of the martial law declaration on the city’s business, trade and investments.

The declaration of martial law in Mindanao was prompted by the siege of Marawi City by the Islamic State-linked Maute and Abu Sayyaf groups in 2017.

“I think Mayor Sara conferred with the business sector because martial law has its cost,” said Councilor Maria Belen Acosta, chair of the committee on peace and public safety who sponsored the resolution.

Acosta cited the high insurance premiums paid by companies already operating and planning to invest in Davao and the impact of travel advisories issued by foreign governments, among others.

Duterte, during an Aug. 2 televised interview with Quiboloy, cited her previous discussions with diplomats who said that apart from casting a negative image on the President’s home city, the declaration of martial law also raised the cost of doing business here.

Duterte pointed out that the city government’s assessment showing that security measures were already in place and its “very good” coordination with the security sector.

Acosta said the proposed lifting of martial law in Davao City had the backing of the military.

She cited a July 16 letter from Lt. Gen. Felimon Santos, commander of the Eastern Mindanao Command, who supported the proposed exemption of Davao as long as all security forces were in place and existing security measures and initiatives would remain operational to prevent terrorist groups from staging an attack.

The group Konsensya Dabaw hailed the city government’s move to call for the lifting of martial law as it urged other local governments to follow the city’s lead.

“We laud the Davao City Council for confirming what many Mindanawans already know but have not been able to articulate under a cloud of uncertainties: that martial law in Mindanao is not only unnecessary but also has its negative effects,” said Mags Maglana, coconvener of Konsensya Dabaw, which is composed of survivors of the martial law regime of Ferdinand Marcos.

In Manila, an official of the Department of the Interior and Local Government (DILG) said the agency was open to selectively impose martial rule on problem areas in Mindanao

In an interview on Wednesday over CNN Philippines, DILG spokesperson Jonathan Malaya said local officials and civil society organizations in Mindanao had held informal talks and “were all unanimous in requesting the President to again ask Congress for declaration of martial law.”

“But I think a compromise can be made by lifting it [martial law] in some areas, limiting the martial law declaration only to those areas which still have big peace and order problems,” Malaya said.

In a text message to the Inquirer, he said: “Our official position is this: per advice of [Interior] Secretary Eduardo Año, we are open to the selective lifting of martial law.”

“We will make an assessment first and then make the necessary recommendation to the President,” he said. —With a report from Jeannette I. Andrade

Read Next
Metro Briefs: Aug. 8, 2019
LATEST STORIES
After winning title, time for LA Tenorio to give back to Batangas folk
‘Mia’: Rom-com with a cause a career-boosting showcase for Coleen Garcia
No.13 lucky for Orlando Bloom
The ties that bind: Why the guys of Black Eyed Peas prefer to stay together
How Yam handles flirtatious guys
MOST READ
Nadine Lustre’s phone stolen in Brazil
Gretchen Barretto’s daughter Dominique graduates magna cum laude from California college
Lights inside SMX hall flicker as Duterte rants vs Ayala, Pangilinan anew
Will you be the first P16 Billion Powerball jackpot winner from the Philippines?
Don't miss out on the latest news and information.