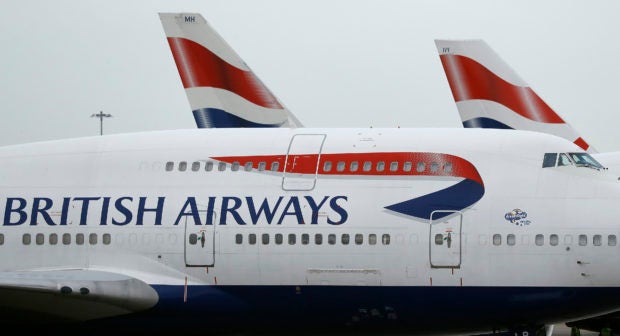 This January 10, 2017 file photo shows British Airways planes parked at Heathrow Airport in London. Spanish emergency services say that they have responded to a British Airways flight that filled with smoke while landing and had to evacuate its passengers, News agency Europa Press reported Monday, Aug. 5, 2019. (AP Photo/Frank Augstein, File)

LONDON — British Airways (BA) canceled almost 100 flights to and from London airports on Wednesday after its check-in systems were hit by computer problems.

The airline said a “systems issue” was causing delays and cancellations for short-haul flights from Heathrow, Gatwick, and London City airports.

British Airways said it was relying on back-up and manual systems, and canceled 81 flights due to operate to, or from Heathrow, and 10 Gatwick flights, stranding some 15,000 passengers. More than 200 other flights were delayed.

“A number of flights continue to operate but we are advising customers to check ba.com for the latest flight information before coming to the airport,” the airline said in a statement.

BA said short-haul passengers due to travel Wednesday could re-book for another day.

In May 2017, tens of thousands of passengers were stranded when a global computer failure grounded hundreds of British Airways flights over three days. BA passengers were also hit with severe delays in July and September 2016 because of problems with the airline’s online check-in systems.

The airline is also set to be fined 183 million pounds ($222 million) over a cyberattack on its security systems last year in which the personal data of up to 500,000 customers were stolen. /kga

Read Next
8chan operator probably still in PH – Guevarra
EDITORS' PICK
QC gov’t to give free COVID-19 antigen test to residents on January 19
DOH: 28,471 new COVID-19 cases in PH; active cases now 284,458
Acer starts the year off strong with the Aspire Vero National Geographic Edition
Over 3 Million worth of prizes to be won at Smart Padala’s SENDali Manalo Promo!
WHO urges manufacturers to provide COVID-19 vaccine data
Gear up and get ready to play with Yamaha Mio Gear
MOST READ
Cold-case investigation names surprise suspect in Anne Frank’s betrayal
On Day 2 of implementation, gov’t says workers now exempt from ‘no vax, no ride’ policy
Czech anti-vax singer dies after deliberate infection
Emma Stone calls Andrew Garfield a ‘jerk’ after he ‘lied’ about his ‘Spider-Man: No Way Home’ appearance
Don't miss out on the latest news and information.