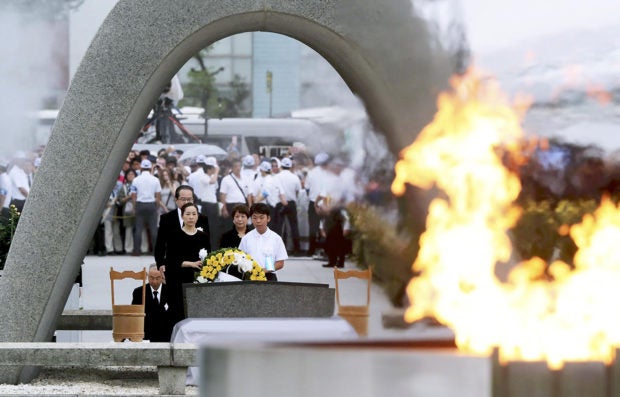 Participants lay flowers at the Cenotaph for the A-bomb Victims in Hiroshima Peace Memorial Park in Hiroshima on Tuesday morning. The Japan News/Asia News Network

HIROSHIMA — About 50,000 people attended the peace memorial ceremony in Hiroshima on Tuesday to honor victims of the atomic bombing in 1945.

As the era has shifted from Showa to Heisei to Reiwa, the number of people still alive who were harmed by the bombings of Hiroshima and Nagasaki has dropped below 150,000 for the first time, raising the issue of how to hand down experiences and lessons learned from the attacks to the younger generations.

In his Peace Declaration, Hiroshima Mayor Kazumi Matsui touched on the Treaty on the Prohibition of Nuclear Weapons passed at the United Nations in 2017, and went on to urge the government to display leadership toward “a world free from nuclear weapons.”

Those who attended the ceremony held in Hiroshima Peace Memorial Park to mark the 74th anniversary of the bombing included hibakusha atomic bomb victims, prefectural representatives of bereaved families and Prime Minister Shinzo Abe. Also present were ambassadors and other representatives from the European Union and about 90 countries, including the United States, Britain, France and Russia, four of the five nuclear-possessing countries under the Nuclear Nonproliferation Treaty. They included the U.S. Embassy’s Charge d’Affaires ad interim Joseph Young.

At 8:15 a.m., the time of the bombing, bereaved family members and others rang the “Peace Bell” and participants observed a minute of silence.

“In the Reiwa era as well, it is our nation’s never-changing mission to continue to exercise efforts toward realizing a ‘world free of nuclear weapons,’” Abe said in his address. “The new era has to be one with peace and filled with hope.”

The renewed list of victims — adding the names of 5,068 Hiroshima bombing hibakusha who died in the past year — was placed in the Cenotaph for the A-bomb Victims in the park. The number of victims from the Hiroshima atomic bombing now stands at 319,186.

The number of hibakusha throughout the nation as of the end of March stood at 145,844, down by 9,015 from a year earlier. Their average age is 82.65, up by 0.59 from the previous year, illustrating the aging of the hibakusha.