Pulse: 7 out of 10 Filipinos believe no cheating happened in May polls

MANILA, Philippines—Majority of Filipinos believe that no cheating happened in the recently-held May 2019 midterm elections, a Pulse Asia survey showed Wednesday.

The survey, conducted from June 24 to 30, revealed that 74 percent of the respondents nationwide said no cheating occurred in the midterm polls, while only 7 percent affirmed the presence of electoral fraud. Meanwhile, 19 percent cannot confirm the presence or absence of cheating in the May elections. 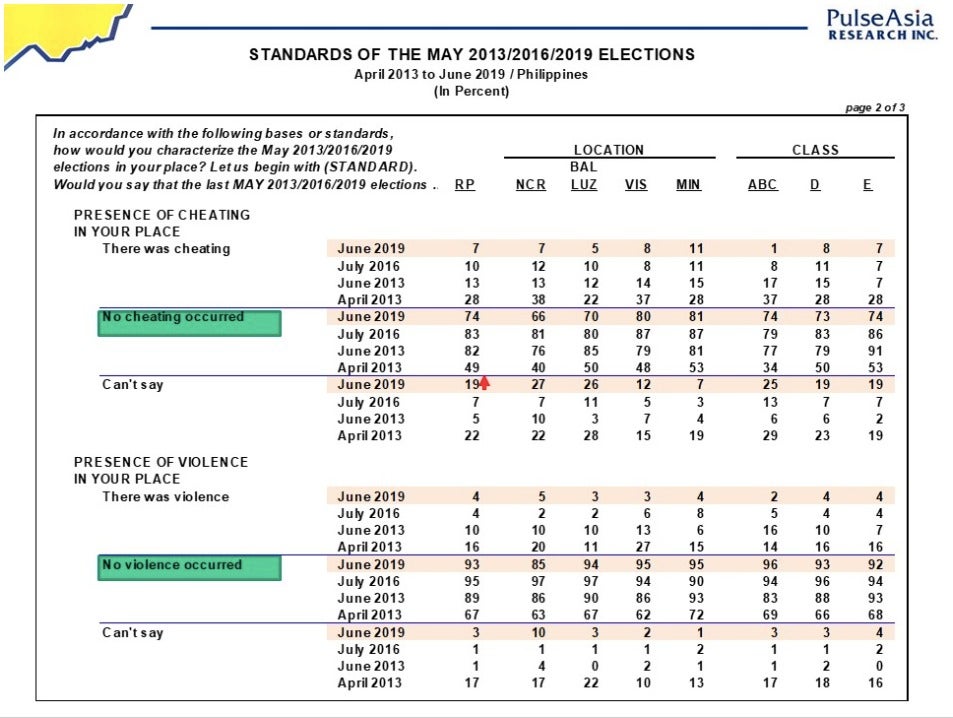 Moreover, a resounding 93 percent of the respondents claimed that no violence took place in their place while only 4 percent said there was with 3 percent saying they were unsure.

The May 13, 2019 polls have been marred with technical glitches involving the malfunctions of vote-counting machines and SD cards. The Commission on Elections (Comelec) transparency server also suffered a seven-hour glitch after the elections, delaying the release of partial election results and posing questions to the integrity of the polls.

However, the Pulse Asia survey also showed that 82 percent of the 1,200 respondents nationwide said the poll results were believable, 8 percent said they are not believable and 10 percent answered they were unsure.

The survey had sampling error margins of ±3 for national percentages, and ±6 each for Metro Manila, Balance of Luzon, Visayas, and Mindanao.

The Pulse Asia survey was first presented in a post-election forum with the Comelec, Democracy Watch, Legal Network for Truthful Elections, and Parish Pastoral Council for Responsible Voting.  /muf