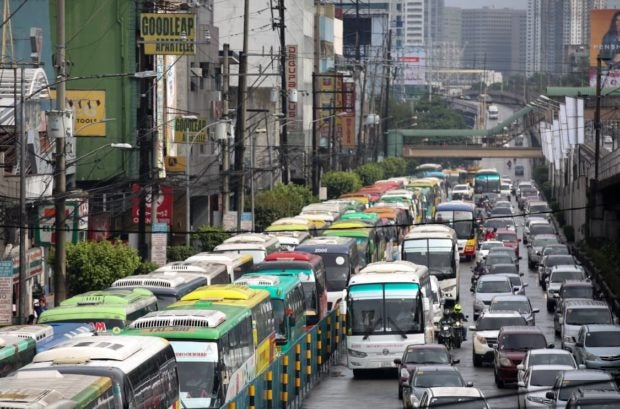 Provincial buses pass outside the lanes designated for city bus stops and are made to pass through the underpasses and fly-overs along EDSA south-bound lane. INQUIRER / Lyn Rillon

As of 9:30 a.m., HM Transport Inc. pulled its buses out of the Sta. Rosa Integrated Terminal (SRIT) here and ordered its drivers to proceed with their regular route-the Sta Cruz, Laguna to Cubao route-without passing through this city.

Fernandez said they were the only bus company that “volunteered” to participate in the government’s dry run after the Quezon City trial court last week issued an injunction on the new EDSA traffic policy.

Without any compelling order from the government, Fernandez said their competitor proceeded with the regular bus route entering EDSA “so the passengers rode the [competitors’] buses instead.”

HM was the major participant in Wednesday’s dry run and deployed 40 buses from 3:10 a.m. to 9:30 a.m. There were a couple of other buses from other companies.

“From (SRIT), all those 40 buses returned to our terminal in Sta. Cruz (Laguna) empty,” Fernandez said.

The dry run was the third so far since the government proposed the ban on provincial buses to decongest EDSA.

SRIT project manager Vic Bonaobra II said he would still consider the dry run a “success” despite some issues this morning about the dispatching of city buses that ferried the passengers from the provinces to the metro.

Body of missing US woman found in Russia