UK cautions its citizens against sea travel in PH 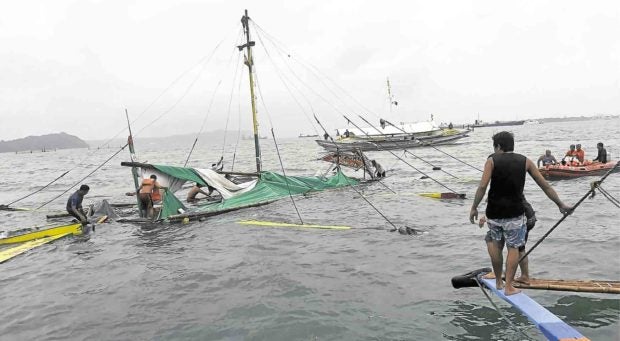 Rescuers and volunteers check the wreckage of one of the three boats that capsized on Saturday, Aug. 3, 2019, in the waters between Iloilo and Guimaras provinces. (Photo courtesy of the Philippine Red Cross via AP)

MANILA, Philippines — The United Kingdom has advised its citizens against traveling on ferries and passenger boats in the Philippines following the deadly sea accidents in the waters between Iloilo and Guimaras over the weekend.

In its updated travel advisory issued Monday night, the Foreign and Commonwealth Office (FCO) cautioned against sea travel, particularly during the rainy season from the months of June to December.

We have added information to our travel advice about the passenger boats capsized in the Iloilo-Guimaras straits. Our advice on the use of ferries and passenger boats in the Philippines remains the same. Follow the link for more info: https://t.co/0gwuyIv9TV#TravelAdvicePH2019

“Avoid travel on ferries and passenger boats if possible, particularly in the rainy season. They are often overloaded, may lack necessary lifesaving equipment or be inadequately maintained and have incomplete passenger manifests,” the advisory reads. “Storms can develop quickly and maritime rescue services in the Philippines may be limited.”

Last Saturday, three motorboats capsized due to strong winds and big waves off the Iloilo-Guimaras Strait, which claimed the lives of at least 31 people.

Meanwhile, UK citizens were also warned against “all travel to western and central Mindanao and the Sulu archipelago“ due to “terrorist activity and clashes between the military and insurgent groups.”

“The FCO advise against all but essential travel to the remainder of Mindanao (excluding Camiguin, Dinagat and Siargao Islands) due to the threat of terrorism,” it said.

The FCO had previously issued this reminder following the bomb attacks that hit a Roman Catholic cathedral in Jolo in the province of Sulu in January 2019.

The incident killed at least 20 people and wounded around 100 others.