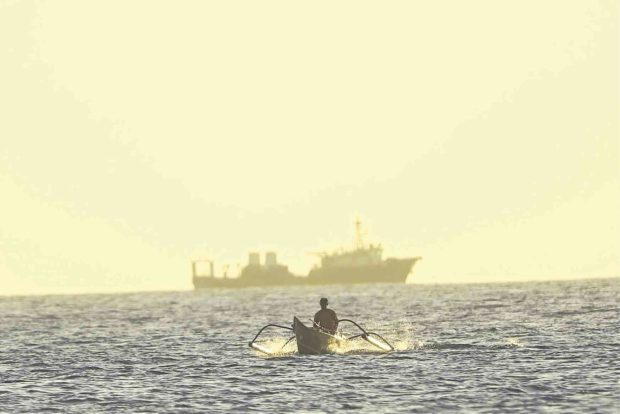 RISKY WATERS A Filipino fisherman in a banca moves away from a Chinese Coast Guard vessel at Panatag (Scarborough) Shoal in the West Philippine Sea. —Rem Zamora/PDI

MANILA, Philippines— President Rodrigo Duterte should have invoked the 2016 Hague ruling against China a long time ago, senators said on Tuesday.

But they nevertheless welcomed Duterte’s reported plan to raise the issue during his visit to China this month.

Senate President Vicente “Tito” Sotto III said he supports the move as he ruled out any negative impact on the relations of the two nations.

“I do not expect any bad effect,” Sotto said in a text message when sought for comment.

“Perhaps China would be able to tell PRRD (Duterte’s initial or President Rodrigo Roa Duterte) why they did not participate in the arbitration. For all we know, it could clear up some issues,” the Senate leader added.

“This is something that President Rodrigo Duterte should have been doing consistently from the beginning,” Hontiveros said in a statement.

“Nevertheless, I welcome Malacañang’s statement that the President will finally invoke The Hague ruling during his visit to China this month. Sa wakas!”

Quoting Duterte, presidential spokesman Salvador Panelo said: “There will be a time that I will invoke the arbitral ruling. This is the time.”

READ: ‘The Time has come’: Duterte to invoke Hague ruling in China visit this August

Hontiveros though expressed hope that Duterte’s plan to raise the Hague ruling in China was not only meant “to shore up support within the military but because it is his duty as President to defend our country’s territorial integrity.”/ac