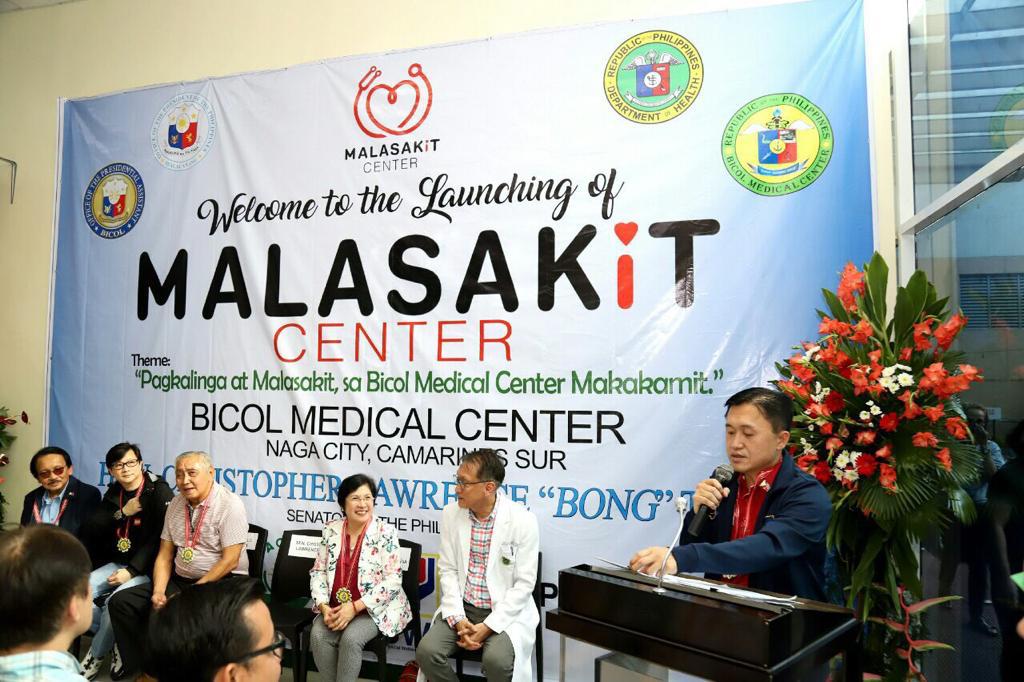 MANILA, Philippines — Senator Christopher Lawrence “Bong” Go attended the launching of the Malasakit Center in Bicol Medical Center, Naga City, Camarines Sur on Saturday to the delight of the residents, especially those in need of fast, affordable and reliable health care assistance in the Bicol region.

The said center is the 39th in the country and second in Bicol Region, after the first one opened in the Bicol Regional Training and Teaching Hospital in Legazpi City, Albay last October 14, 2018.

In his speech, Go assured that the center will not be the last in Bicol as he is also facilitating the opening of more Malasakit Centers in various Bicol provinces and other parts of the country.

Malasakit Center is a one-stop shop for indigent and poor patients seeking financial assistance. Patients only need to fill out one form to avail of medical assistance from various government agencies, such as the Department of Social Welfare and Development, Department of Health, PhilHealth, Philippine Charity Sweepstakes Office and Philippine Amusement and Gaming Corporation.

Go also vowed to institutionalize these centers through his proposed Senate Bill No. 199, also known as the Malasakit Center Act of 2019, so that their operations will continue even beyond the Duterte Administration.

Aside from the said measure, Go also seeks to promote the welfare of health care professionals in the country by pushing for their increased salary to encourage them to provide better services to their fellow Filipinos (SB No. 200).

Some of the other proposed bills that he shared with the residents of Naga City include measures to amend the Philippine Nursing Act of 2002 with the goal of improving nursing education in the country (SB No. 395), the Barangay Health Workers Act of 2019 to ensure that each barangay will have enough BHWs serving the community (SB No. 392), a measure to expand the coverage of the Mandatory Basic Immunization Program (SB No. 398), prohibition of malicious and improper use of telecommunications devices on emergency hotlines by prohibiting and penalizing prank calls at any time (SB No. 400) and the creation of an executive department for disaster resilience to prevent deaths and injuries from calamities (SB No. 205).

For better emergency response, he also seeks to institutionalize an emergency medical services system nationwide (SB No. 394), akin to the Central 911 system of Davao City.

In ending his speech, Go sought everyone’s support for the last three years of President Rodrigo Duterte in office and his six years in the Senate.

“The President still has three years left in his term, and my six years in the Senate has just begun. Let us all work together and continue serving the people with integrity and compassion. Let us continue the positive change for the betterment of our country and the future generations of Filipinos,” the senator urged, drawing applause from the crowd.  /muf