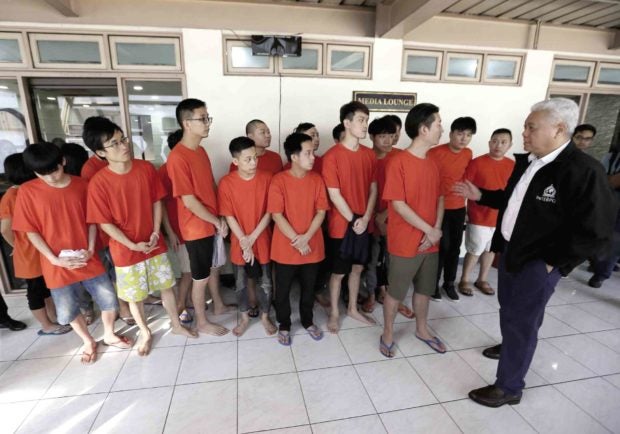 NO PROPER PAPERS Chinese workers illegally employed in a Pogo company were arrested a few months ago. —RICHARD REYES

According to Duterte’s spokesman Salvador Panelo, the President approved the proposal during the 40th Cabinet meeting in Malacañang on Monday night.

The new visa issuance policy would veer away from the practice of stamping Philippine visas on a separate application form, which was ordered in December 2012 under the previous administration.

During the Aquino administration, the Philippines stopped stamping Philippine Visas on Chinese passports that contain a map of China’s expansive nine-dash line claim in the South China Sea.

“Foreign Affairs Secretary Teodoro Locsin proposed to stamp the Philippine Visa on passports of Chinese nationals who wish to enter the country instead of the practice (adopted) before of placing it on a piece of paper,” Panelo said in a statement.

“This was approved by the President,” he added.

The development came after Locsin said the Philippines should drop the “visa-upon-arrival” (VUA) privilege granted mainly to Chinese nationals after National Security Adviser Hermogenes Esperon raises alarm over the continuing influx of Chinese workers in the Philippines.

The current VUA policy allows Chinese nationals to stay up to 30 days with the possibility of an extension for up to 6 months.

During the Cabinet meeting, Panelo said Justice Secretary Menardo Guevarra vowed to “closely (monitor) the stay of Chinese tourists in the country and will implement immigration measures should they exceed their allowable stay here.”

More than 3 million Chinese have arrived in the country over the past three years, according to the Bureau of Immigration (BI).

Around 100,000 to 130,000 of them are registered workers in Pogos or offshore gaming companies that facilitate online gaming exclusively for foreigners outside the Philippines via the internet with thousands believed to be illegally working in the sector.

The Bureau of Internal Revenue reported that through an inter-agency task force composed the government was able to issue tax identification numbers to Pogo workers, and as a result, collect taxes from them. The task force is composed of BIR, DOJ, BI, National Intelligence Coordinating Agency (NICA), and Department of Labor and Employment (DOLE).

“The Department of Finance estimated that P2 Billion monthly revenues shall be collected from Pogos,” Panelo noted. /kga