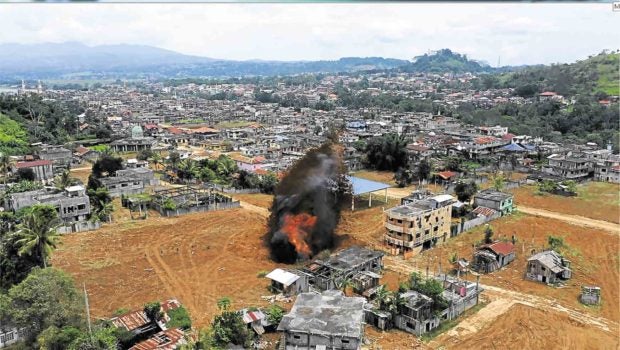 BLASTED Unexploded bombs recovered from the rubble at the city center of Marawi are detonated by soldiers away from residential communities. —VIDEO GRAB COURTESY OF EDDMARI-AERO 360

MARAWI CITY, Lanao del Sur, Philippines — Officials overseeing the reconstruction of this Lanao del Sur provincial capital are still searching for more bombs hidden underneath piles of debris left by the government’s five-month battle against Islamic State-linked militants who laid siege to Marawi in 2017, slowing down the government’s rehabilitation efforts at the city center.

Army Col. Rene Sebastian, commander of Joint Task Group Builder that is in charge of debris clearing, said most of the 46 bombs that had yet to be recovered were dropped by Philippine Air Force planes and were intended to destroy areas where Maute and Abu Sayyaf gunmen were positioned at the height of the war.

On Saturday last week, the military detonated a pile of unexploded bombs and other explosives found in various sections of Marawi’s business center, where fighting was concentrated during the siege, from late May to October 2017.

The detonation happened in Barangay Moncado Colony where a 117.93-kilogram bomb was found stuck 9 meters deep into the ground. A pit was earlier dug to expose a portion of the bomb.

A 50-kg bomb, mortar and artillery projectiles, and grenades earlier recovered by soldiers were placed in the pit and covered with soil. These and the 117.93-kg bomb, which was discovered on July 23, were detonated simultaneously at 11 a.m. on Saturday.

The last time the military detonated a bomb recovered from the battle site was on June 26, a Wednesday. The explosion sent off strong shock waves and caused panic in nearby communities.

But the impact of Saturday’s blast was contained by the 9-meter-high natural wall of the pit. The blast sent soil up as high as 30 meters.

Sebastian assured that their search for the remaining bombs would continue in coordination with Eddmari Construction and Trading Inc., the private firm contracted by the government to clear the debris in Marawi.

The TFBM divided the 250-hectare war-ravaged zone, called “most affected area (MAA),” or “ground zero,” into nine sectors to organize clearing activities and to plan rebuilding.

According to Sebastian, only Sector 1 of the MAA is open for visits by its former residents.

Read Next
Burglars caught with P13M in luxury goods
EDITORS' PICK
Smart 5G goes live
Water remains our saving grace right now
PNP: Checkpoints back in MECQ areas
Been there, done that but what’s the difference between MECQ and GCQ?
BREAKING: 3,226 latest COVID-19 cases bring PH’s total to 106,330
A gem of a residence in the new normal
MOST READ
MECQ guidelines in infographics
Doctors group to Duterte: ‘There was never a call for a revolt’
MECQ in NCR, other areas: Mass transportation suspended, quarantine pass required anew
Duterte heeds frontliners’ plea, reimposes MECQ in Metro Manila, other areas Aug. 4 -18
Don't miss out on the latest news and information.