Over several hours, in successive waves on Sunday, different districts filled with the sound of protesters erecting and just as hastily taking down their improvised barricades. 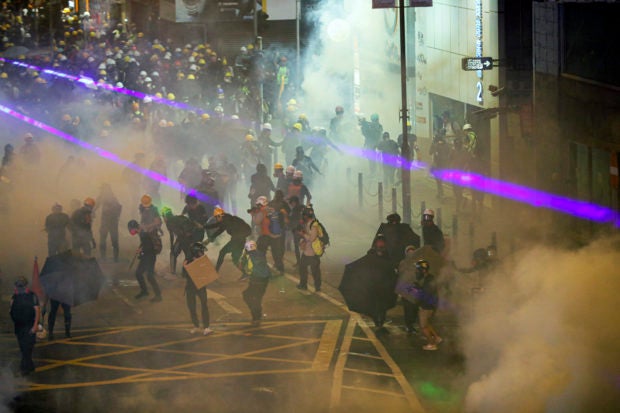 Protesters react from tear gas fired by riot policemen during the anti-extradition bill protest at Causeway Bay in Hong Kong, Sunday, Aug. 4, 2019. The first of two planned protests in Hong Kong on Sunday has kicked off from a public park just hours after police said they arrested more than 20 people for unlawful assembly and other offences during the previous night’s demonstrations. (AP Photo/Vincent Thian)

While past nights of protest have ended in protracted standoffs between demonstrators and riot police, rally participants this time took a different tack. Since their pro-democracy movement began two months earlier, they have repeated to one another: “Be Water” — an attitude of adaptability that was on full display as they occupied and vacated with equal swiftness five different neighborhoods.

“We can’t defend it!” was the cry that signaled to protesters it was time to move out. It meant that police had appeared and were firing tear gas. A person holding a large purple banner that said “Move Back Slowly” led demonstrators to the nearest public transit and toward another target.

Hong Kong’s summer of protest began as a call to withdraw an extradition bill that would have allowed residents in the city to be sent to mainland China to stand trial. Many feared the legislation would destroy the judicial independence essential to the “one country, two systems” framework, which promised Hong Kong certain freedoms not afforded to the mainland when the former British colony was returned to China in 1997.

The agreement was made for 50 years, but some Hong Kong residents feel that the Communist Party-ruled central government in Beijing has already started chipping away at their democratic rights. While the city government has suspended the extradition bill, mass demonstrations have continued with broader calls for direct elections and greater government accountability.

“We are not just another Chinese city, and this is not yet 2047,” said rally participant Cara Lee. “I feel ashamed because for a long time we didn’t do anything. But now we are awake. I have to speak for the next generation.”

Protesters’ five major demands include the release of arrested demonstrators, an independent investigation into alleged police abuse and the dissolution of the current legislature, which is only partially composed of lawmakers who were directly elected.

Sunday’s rallies kicked off at public parks in different parts of the city. One quickly devolved after protesters used what appeared to be a long, homemade slingshot to hurl rocks and bricks at a police station.

After police began to clear the area, protesters converged on the other rally on Hong Kong Island, where demonstrators were already putting on gas masks and handing out Pocari Sweat, a Japanese sports drink favored by the movement.

Even when tear gas is not employed, many protesters wear masks and balaclavas to conceal their identities. Last week, police charged 44 demonstrators with rioting, an offense that carries a maximum penalty of 10 years in jail. During clashes Saturday, at least an additional 20 were arrested.

The potential repercussions have compelled protesters to maintain anonymity whenever possible. Umbrellas serve not only as tear gas shields, but also as cloaks. A shout of “It’s raining!” will prompt protesters to form a canopy of umbrellas to conceal what’s going on underneath them — the building of barricades using metal road barriers, construction fences and other public materials tied together with string. 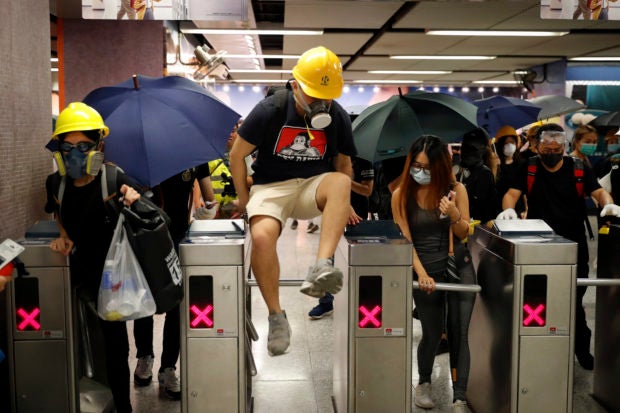 A protester jumps over the gate as protesters exit the Causeway Bay MTR station as they proceed to the anti-extradition bill protest destination, in Hong Kong, Sunday, Aug. 4, 2019. The first of two planned protests in Hong Kong on Sunday has kicked off from a public park just hours after police said they arrested more than 20 people for unlawful assembly and other offences during the previous night’s demonstrations. (AP Photo/Vincent Thian)

They also make efforts to resist surveillance. Security cameras are spray-painted black, obscured by umbrellas or covered with tape. As for cameras out of reach, protesters point bright lasers at them to distort their footage.

“I really am scared of possibly being punished,” said Mary Leung, a 21-year-old who wore a mask. “The police are unpredictable. But I’m so moved by how everyone is supporting each other.”

Leung said she had not expected so many different groups of people, especially older residents, to support the movement.

The rallies, which generally begin in the afternoon and stretch past midnight, entangle the communities that host them. While some restaurants and shops close early, others offer free water and shelter. On Sunday evening, hundreds of cars and buses were temporarily at a standstill when protesters blocked roads leading to a major cross-harbor tunnel. /gsg