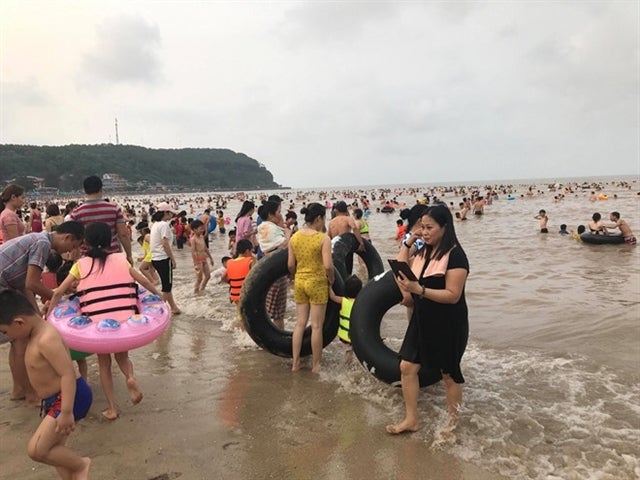 HANOI — Hanoian Nguyen Huy Ha and his family still remember clearly their experience on a tour from the capital city to the town of Tam Dao in the northern mid-land province of Vinh Phuc in May.

“It was really a terrible trip,” Ha said.

The trip was in trouble from the start, with the tourists getting stuck in a horrible traffic jam on National Highway 2B that kept them from their destination.

“The traffic jam that day really taught me how bad traffic can be,” Ha told Viet Nam News. “The ones people experience in Hanoi or any other city around the world is nothing. It was really a disaster. It went on for kilometers. Tourists who had only hoped to enjoy a relaxing visit to Tam Dao had to sit in the standstill for hours.”

The trip only got worse from there. Ha was even angrier when speaking about his family’s experience on the cable car.

“When we were halfway to the top of the mountain, the cable car suddenly stopped,” Ha said. “It was terrifying. People were screaming, and everyone thought we were in real danger until an electricity cut was announced. We had to wait for one hour hanging there in the middle of the sky.”

Ha said that while these might have been isolated incidents, their real cause was the mass influx of tourists to the Tam Dao summer resort town during national holidays.

Ha’s experience is just one example of the consequences of overcrowding at tourist sites.

Like Tam Dao, many other famous tourist spots across the country such as Sa Pa and Ha Long Bay in the north, Da Nang, Hue and Da Lat in the central region and the Central Highlands have suffered from similar problems, particularly during the high season for tourism.

Over the last several years, the Vietnamese tourism industry has been posting remarkable growth. The number of visitors from abroad and of domestic travelers has been steadily climbing, bringing higher incomes for those in the tourism sector.

But the flip side of this impressive development is greater challenges with overcrowding and the upkeep of tourist destinations.

Most experts say the increase in the number of tourists is positive for the sector, but some have expressed fears that it may have reached its saturation point and the growth is not sustainable.

A recent World Bank report on Vietnam’s economic development placed special focus on tourism, saying it has been experiencing a boom for most of the past decade and that the country has established itself as one of Southeast Asia’s top tourist destinations.

“The number of international arrivals to the country has nearly quadrupled during this period, from 4.2 million in 2008 to 15.5 million in 2018,” the report reads.

“Domestic tourism, which is significantly greater in volume than inbound tourism from abroad, has experienced a similar surge – a four-fold increase in the number of domestic traveller-trips, from 20.5 million in 2008 to 80 million in 2018.

“The sector’s rapid expansion, however, has brought it to a tipping point in its development, where continued growth, if not well managed, could have adverse economic, environmental and social impacts.”

Ngo Hoai Chung, vice chairman of the Vietnam National Administration of Tourism, said sites were especially overloaded during national holidays because of an imbalance in supply and demand and a lack of choices.

”When overloading occurs, it means the travel experience is not guaranteed to meet expectations, service quality is degraded and cheating, fraud and inflated prices are more likely,” the official said.

Chung said a lack of proper marketing had also contributed to the problem, since tourists are not aware of every possible destination.

“Tourists are not provided with adequate information about the place they plan to go, so they do not make the best choice,” he said.

“While many beaches like Bai Chay in the northern province of Quang Ninh, Sam Son in Thanh Hoa, Cua Lo in Nghe An and cities like Da Nang and Nha Trang are often overloaded with tourists, others in the provinces of Phu Yen, Ninh Thuan and Binh Thuan are peaceful and deserted such as Mui Ne.”

Meanwhile, Nguyen Thuy, a marketing officer from Bao Son Travel, said overcrowding at popular destinations had a serious negative impact on tours for both foreign and domestic travellers.

“Many foreign tourists – including those arriving from China by land and those flying in from other countries – rush to Da Nang and Nha Trang, causing overloading,” Thuy told Viet Nam News.

According to Thuy, Vietnamese tourists usually choose to travel during the peak season in May, June and July, adding to strain on tourism services during these months.

“In peak months, an overloaded tourism system is unavoidable,” Thuy said. “Some places such as the beaches of Sam Son, Cat Ba and Ha Long are terribly crowded and visitors have to wait four or five hours to get on board on a vessel to reach the sites.”

This overcrowding also puts a strain on tour companies, forcing them to mobilize their resources to salvage the experience for guests.

“Whenever we face with overloaded sites, our company has to scramble to work with hotels to provide a convenient experience for tourists,” Thuy said.

To avoid the situation, Chung said that in the coming high season, visitors should collect information about the places they want to visit so they understand where they are going.

The tourism authority official suggested that before traveling, tourists should carefully prepare for their stay by planning their transportation, accommodations and restaurants. They should avoid impromptu travel because it makes it more likely they will encounter unexpected incidents.

Chung said in recent months, many localities had hit their targets for attracting tourists, however, the sector as a whole needed to employ a sustainable, long-term development strategy, especially ahead of the peak tourism season.

He urged localities to offer more tourism services at different times of year to avoid overcrowding during the peak season.

“New destinations need to be promoted so visitors have more options,” he said. “And most of all, service quality needs to be strictly managed so tourists have a good experience and are not overcharged.”

According to the World Bank report, “rapid visitor growth has been achieved, in large part, through a shift to a lower-spending visitor mix, a continued emphasis on mass market tourism products and increased concentrations of visitors into already-crowded and popular local destinations.”

“To ensure the long-term sustainability of the sector, strategic choices need to be made regarding the preferred pace, composition and geographic balance of its future growth, and supported by decisive policy measures and investments in several areas.”