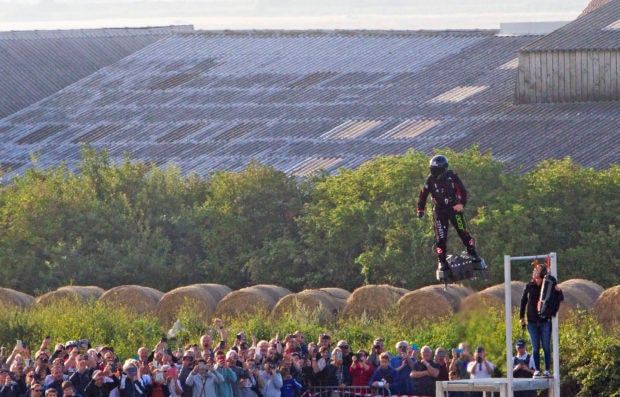 Franky Zapata, a 40-year-old inventor, takes to the air in Sangatte, Northern France, at the start of his attempt to cross the channel from France to England, aboard his flyboard, Sunday Aug. 4, 2019. Zapata crossed the English Channel on Sunday on a flying board after his first attempt failed when he crashed into a refueling boat 20 kilometers (12 miles) into the trip. (Photo by MICHEL SPINGLER / AP)

SANGATTE, France — Is it a bird? Is it a plane? No, it’s a French inventor flying over the English Channel on his hoverboard.

Looking like a superhero, Franky Zapata successfully completed the famed 35-kilometer (22-mile) journey in just 22 minutes Sunday morning, reaching speeds of up to 177 kilometers per hour (110 mph) on the hoverboard that has made him a household name in France.

Propelled by a power pack full of kerosene, Zapata set off from Sangatte in France’s Pas de Calais region and landed in Saint Margaret’s Bay in the Dover area of southeast England. He stopped only once, on the British side, to refuel his invention from a boat in the choppy waters.

“I tried to enjoy it and not think about the pain … I’m very lucky,” he told reporters after the feat.

It was, of course, the record for such a trip: No one else has tried to cross the channel in his way.

It was also a personal record — the furthest distance that the 40-year-old, who drew nationwide attention after whizzing above European leaders in Paris at Bastille Day celebrations, had ever traveled atop his hoverboard.

The wind in the Channel, especially gusts, presented a major challenge, he said, adding that he bends into gusts but is destabilized if the wind quickly dies.
Sunday was the inventor’s second attempt to cross the Channel.

His first — 10 days ago — culminated in him colliding with a refueling boat several minutes into his flight. That destroyed his transportation, a version of the flyboard that his company sells commercially.

Zapata told reporters that this time he was “scared to touch down” at the refueling station on the sea but knew his team “whatever happened, wouldn’t let me fall into the water.”

He said he and his team worked around the clock to pull off the feat.

French maritime authorities said the refueling operation was dangerous, even though Zapata nixed his initial plan to refuel the power pack he wears during his flight from a flying platform.

Read Next
9 killed, at least 16 injured in Ohio shooting; suspect dead
EDITORS' PICK
Do all the things you do, faster
Motorcycles, smartphones, and cash prizes up for grabs in TNT’s ‘Tuloy Ang Saya’ Raffle in Mindanao
House energy committee chair Arroyo bats for cheap electricity
NCR at increased COVID risk again
New PS-DBM director says DepEd laptop MOA ‘not legal’
House okays budget; ways to go in Senate
MOST READ
Robredo’s tarpaulin portrait at Palace just a ‘placeholder’
Shopee PH gets flak for getting Toni Gonzaga
Robredo supporter tackles elephant in room: No massive fraud in 2022 polls, surveys were just right
DepEd: We are in a crisis situation in education sector
Don't miss out on the latest news and information.