ILOILO CITY—Nine more bodies of passengers of three motorboats that capsized on Saturday (Aug 3) in the waters between Iloilo City and Guimaras Island were recovered on Sunday (Aug 4) raising the death toll to 26.

The bodies of 10 fatalities were recovered in the waters of Dumangas town alone, about 28 kilometers northeast of Iloilo City. 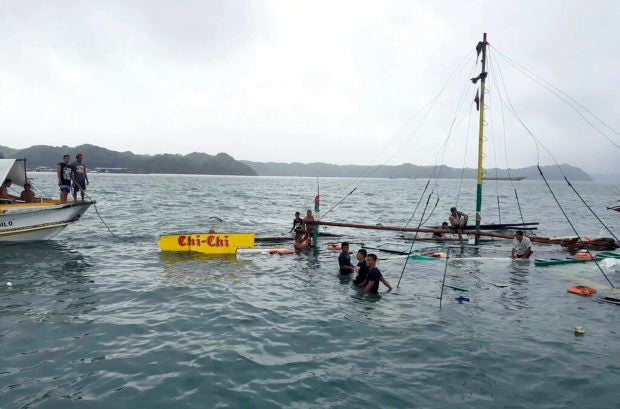 In this photo provided by the Philippine Red Cross, rescuers stand beside the remains of the M/B Chichi ferry boat after it capsized due to bad weather in the waters between Guimaras and Iloilo provinces, central Philippines on Saturday Aug. 3, 2019. Philippine Red Cross via AP

The motorboats Chi-Chi and Keziah capsized around noon on Saturday after being hit by a squall or sudden strong gust of wind.

Many of the fatalities were Guimaras residents while some were from Iloilo City and other areas, according to Guimaras

Gov. Samuel Gumarin said some of the dead were tourists.

Gumarin and Vice Gov. John Edward Gando said the tragedy iwas the worst in living memory for the people of Guimaras./TSB