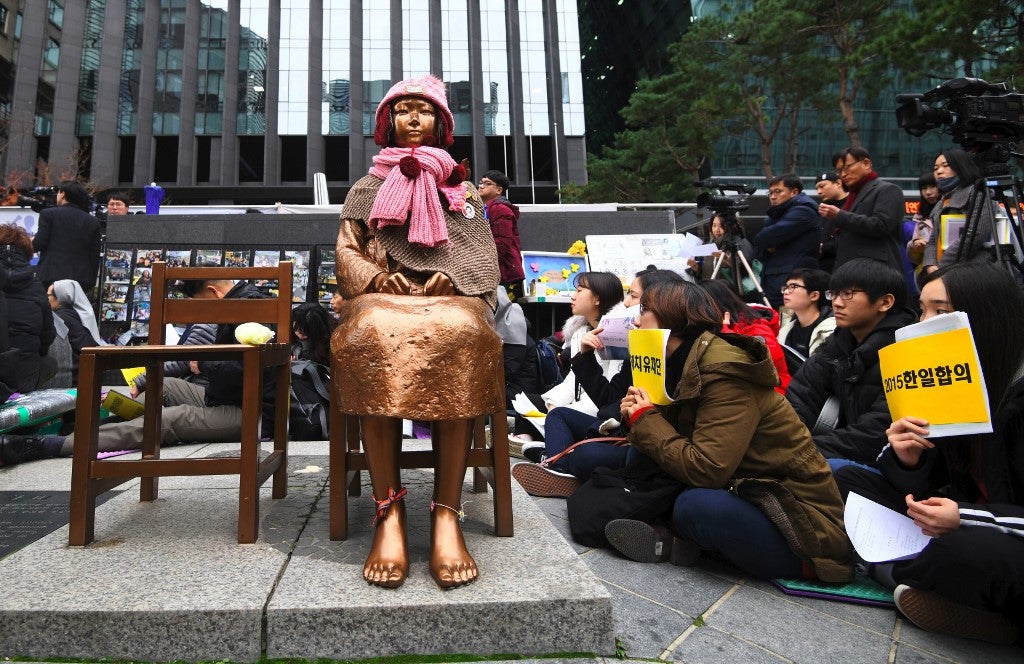 South Korean protesters sit near a statue of a teenage girl symbolizing former “comfort women”, who served as sex slaves for Japanese soldiers during World War II, during a weekly anti-Japanese demonstration in front of the Japanese embassy in Seoul on November 21, 2018. (File photo by Jung Yeon-je / AFP)

TOKYO, Japan — A Japanese exhibition featuring a controversial South Korean artwork depicting a wartime sex slave has been cancelled after threats of violence as bilateral ties between the countries fray.

The cancellation comes as relations between Tokyo and Seoul are soured by bitter disputes over territory and history stemming from Tokyo’s colonial rule over the peninsula in the first half of the 20th century.

The exhibition, which was part of a major art festival in Aichi, central Japan, was shut down on Saturday after just three days.

Titled “After Freedom of Expression?”, the event was dedicated to showing works that were censored elsewhere and was originally scheduled to run for 75 days.

The statue — a girl in traditional South Korean clothes sitting on a chair — symbolises “comfort women” who were forced to work in wartime Japanese military brothels during World War II.

Aichi Governor Hideaki Omura, who heads organisers, said they received a number of threatening emails, phone calls and faxes against the exhibition.

Omura said one of the faxes read: “I will visit the museum carrying a gasoline container,” which can evoke last month’s arson attack on an animation studio in Kyoto that killed 35 people.

“We made the decision as we fear that we can’t safely organise the exhibition,” the governor said.

Mainstream historians say up to 200,000 women, mostly from Korea but also other parts of Asia including China, were forced to work in Japanese military brothels.

Activists have in recent years set up dozens of statues in public venues around the world, many of them in South Korea, in honour of the victims.

The statues have drawn the ire of Tokyo, which has pressed for the removal of one outside its embassy in Seoul.

On Friday, Japan and South Korea rescinded each other’s favoured export partner status and Seoul said it would review a military information agreement, as a long-running row between the US allies hit a new low.

The two countries — both democracies and market economies — are also mired in long-running disputes over the use of forced labour during World War II.